The ‪TMT is, in fact, a part of a legacy of colonial-capitalist violence committed against Hawaii and Hawaiians, regardless of its scientific merit.

13 May 2015 – Editor’s note: Originally published in The Red Nation, this essay by kanaka maoli David Maile examines the Thirty-Meter Telescope (TMT) in the context of a history of colonial-capitalist violence, making it clear that the TMT project is, in fact, a part of that legacy of violence against Hawaiians. 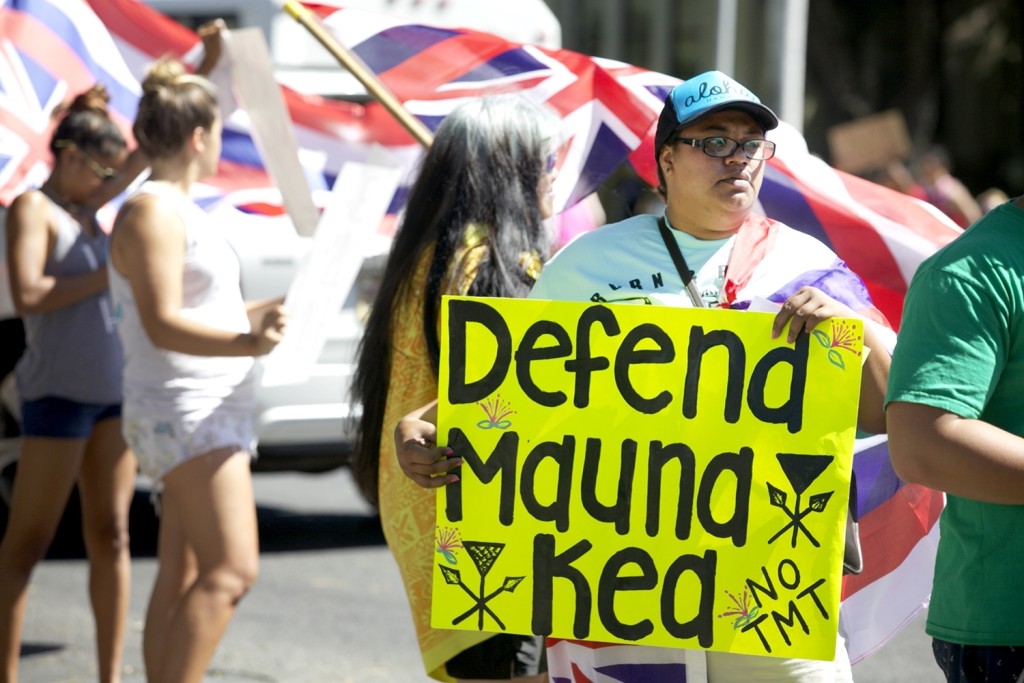 On April 16, the Hawai‘i Tribune-Herald published an article covering a University of Hawai‘i (UH) Hilo Board of Regents meeting regarding the Thirty Meter Telescope (TMT) project at Mauna Kea. The article featured incisive, anti-TMT testimony. Its headline read: “Science and money do not supersede the sanctity of our mountain.” This statement, which was made by Kalani Makekau-Whittaker, a professor of Hawaiian language at UH Mānoa, reverberated alongside other ‘a‘ole (no) TMT testimony that opposes TMT construction because it will desecrate and destroy Mauna Kea. Mauna Kea is also known as Mauna a Wākea, a sacred mountain to Kānaka Maoli (Native Hawaiians), my people, and our Lāhui Hawai‘i (Hawaiian Nation).

I write this essay in the enduring political spirit of Makekau-Whittaker and others, including Kū Kia‘i Mauna (guardians of the mountain), po‘e aloha ‘āina (Hawaiian patriots), kūpuna (ancestors), and those who, in the words of Samuel C. Amalu, “love that soil.” I write out of a kuleana (responsibility) bestowed upon me by my great-great grandfather, C.B. Maile who, in 1897, challenged U.S. notions of democracy and morality by signing both the Kū‘ē Petitions against annexation and the Citizens’ Committee Memorial. I also write against the peoples, institutions and discourses that seek to ravage Mauna Kea and stymie our defense of ea (life, land, and sovereignty). This is a response to incursion. It is a kuleana I’ve been given.

It speaks to Jon Kamakawiwo‘ole Osorio’s caution in Dismembering Lāhui that “history should instruct the living, not merely memorialize the dead.”

If it is not obvious by now, I am against TMT. But, this essay is meant less as a political tract and more as an intervention into the diverse and difficult discussions unfolding as this issue plays out. It is thus meant for both the protectors of the mountain and those who support TMT. Its purpose is to make sense of the discourses of science and time that are being deployed to understand the entanglements of Mauna Kea, TMT and Hawaiians.

This essay is not meant as a totalizing narrative of the struggle at Mauna Kea. It does not recenter institutional power located in the settler state, law, or academy. And while it is definitely not in the genre of scientific inquiry, it also cannot be called anti-intellectual, for it assumes westernized scientific knowledge as its site of critique and analysis. In following, this essay suggests that the categories of science and time used to describe the TMT justify capitalist-colonialist violence done to Mauna a Wākea. As I will demonstrate, capitalist-colonialist violence is the concealed and sometimes overt brutalization of Indigenous peoples and land through interconnected processes of colonial domination and capitalist development.

In From a Native Daughter, Haunani-Kay Trask asserts, “This is Hawai‘i, once the most fragile and precious of sacred places, now transformed by the American behemoth into a dying land. Only a whispering spirit remains.”

Trask’s notion of a “dying land” should not be read as a state of emergency that requires resuscitation by settler colonization or so-called ‘scientific transformation’. Rather, her statement speaks to how science matters as a practice and a discourse that can impede upon the “fragile,” the “precious,” and the “sacred” like Mauna Kea. However, the spirit that remains in opposition to TMT is anything but a whisper. Young Kānaka Maoli leaders, such as Hāwane Rios, Kaho‘okahi Kanuha and Lanakila Mangauil, loudly protect Mauna Kea from the TMT. Despite threats of criminalization and the arrests of 31 protectors by county police on April 2, it was Rios, Kanuha, Mangauil and other steadfast protectors that sustained a physical blockade at the road leading to the summit of Mauna Kea in order to refuse passage to TMT vehicles transporting heavy machinery to begin construction.

Yet, Mangauil plainly states, “Our stance is not against the science.” Mangauil goes on to state in a March 31 article in the Hawai‘i Tribune-Herald that the blockade is “not against the TMT itself. It’s against their choice of place.”

Even though anti-TMT proponents have qualified their stance on science, criticism from sources like Bronson Kaahui in Civil Beat suggests that protests against TMT are “new age anti-science activism.” He goes on to depict protestors as “blind sheep” because they are “economically disadvantaged and lacking a proper education.” Kaahui’s article, like others that are critical of the anti-TMT position, also claims the TMT is a celebration of Hawaiian tradition in celestial navigation. In The Hawai‘i Independent, kuualoha hoomanawanui refutes the idea that the kind of science represented by the TMT is a Hawaiian tradition by, instead, illuminating how spiritual faith and “love for our land” recasts tradition away from practices recognized under the rubric of westernized science. The defense against the TMT continues to align itself with these kinds of Hawaiian cultural beliefs about ‘āina (land), arguing that its opposition is to the TMT LLC’s choice to build on sacred land, not to the project’s scientific significance.

The multiple narratives offered by media sources and stakeholders about opposition to the TMT clearly demonstrate how science matters. In fact, it is the hinge of the discourse on this issue: protestors oppose astronomy-industry development; they signal the intent of their opposition by stating that their position is not anti-science; critics claim opposers are anti-science; and critics and other commentators like Kaahui mark the pursuit of science as a Hawaiian tradition.

Richard Ellis, a cosmologist at Caltech—one of the driving institutions of the Thirty Meter Telescope International Observatory LLC (TIO) and a major funder for the TMT—spoke to the Los Angeles Times in 2001 about the UH’s push to develop the astronomy-industry at Mauna Kea. He said, “We’re searching for truth and knowledge, the kinds of things that have motivated countries for centuries. We don’t need to apologize.”

Why is it that anti-TMT arguments must be qualified with pro-science statements like “we’re not against science” while pro-TMT ones unapologetically pursue scientific knowledge even if, in the process, Mauna Kea is bulldozed, developed and desecrated?

Trask’s statement explicitly flags the “American behemoth” as the source of death for Hawai‘i. In so doing, she also points to how westernized science advances imperial and colonial projects that marginalize and dispossess Indigenous peoples. In The Transit of Empire, Chickasaw scholar Jodi Byrd critiques the ways in which astronomical inquiry about the transits of Venus produced and abetted conquest and colonial ideologies also known as colonialism. She posits, “Transit refers to a rare astronomical event, the paired transits of Venus across the sun, that served in 1761 and again in 1769 as global moments that moved European conquest toward notions of imperialist planetarity that provided the basis for Enlightenment liberalism. The imperial planeterity that sparked scientific rationalism and inspired humanist articulations of freedom, sovereignty, and equality touched four continents and a sea of islands in order to cohere itself.”

Simply put, in the scientific pursuit to stablize absolute Truth about the transits of Venus, astronomy-industry development as part of the larger Enlightenment project for the pursuit of truth and knowledge emerged through the dispossession of Indigenous lands and the elimination of Native peoples like Hawaiians. For example, explorers like Captain James Cook exercised the doctrine of terra nullius, assuming Indigenous lands were unoccupied or empty, to justify colonization in pursuit of astronomical knowledge. This process of colonization was and continues to be facilitated through capitalism by developing land for the astronomy industry, which is how violence is hidden within structures of power such as colonialism and capitalism.

Anti-TMT proponents have made the same connections between colonization and the search for astronomical truth so exalted by Richard Ellis. As former physicist Ben Lillie stated in a May 1 article appearing in Slate, “Astronomy has its evils, and as with Mauna Kea, they are often connected to the mistreatment of native peoples.”

The TMT is imperialist and colonial to its core because it belongs to a centuries-long genealogy of Enlightenment that only came into existence through violent imperial conquest. Jake Flanagin’s article in Quartz notes how justifications for the TMT deny this legacy and “further ‘scientific colonization’” of Mauna Kea through claiming scientific benefit and triumph.

In sum, when we talk about the TMT project, we must foreground colonization.

The discourses of science that surround the TMT are also underpinned by racism. A pervasive example is justification for the TMT by proponents like Kaahui or astrophysicist Paul Coleman in MANA’s article, on the grounds that Hawaiians studied the stars. This statement works to shore up colonization of our sacred mountain by employing racist ascriptions. Māori scholar Linda Tuhiwai Smith attests in Decolonizing Methodologies that westernized science “‘steals’ knowledge from others and then uses it to benefit the people who ‘stole’ it. Some indigenous and minority group researchers would call this approach simply racist. It is research which is imbued with an ‘attitude’ and a ‘spirit’ which assumes a certain ownership of the entire world, and which has established systems and forms of governance which embed that attitude in institutional practices.” As I hope to have shown, institutions like the UH, TIO, astronomy-development, and Enlightenment science more generally exhibit this attitude of superiority.

On April 20, an email message sent to the astronomy community by Alexei Filippenko, a professor of astrophysics at the University of California (UC) Berkley, leaked to socal media. The message was originally authored by Sandra M. Faber, a professor of astronomy at UC Santa Cruz, and stated, “The Thirty-Meter Telescope is in trouble, attacked by a horde of native Hawaiians who are lying.” In response to this ergregious racism deployed to discredit Kānaka Maoli, cosmologist Chanda Prescod-Weinstein wrote, “There is no excuse for ‘lying Hawaiian hordes.’ It’s racist.”

Science, colonialism, and racism clearly work hand-in-hand to insult, dehumanize, and silence Hawaiians. Racist remarks are produced in scientific discourses to support the idea that westernized science has supremacy over other considerations. Such remarks also work in tandem with scientific discourse to hide the actual colonial violence being done upon Mauna Kea.

We might also understand this colonial and racial violence leveled at Hawaiians in the context of astronomy-industry development’s collaboration with the U.S. military. In her Civil Beat article, Jessica Terrell admitted that some of the 13 pre-existing telescopes at Mauna Kea are utilized to develop military technology. According to Terrell, “A military use is improved for astronomy and then that improvement is taken up by the military.” She quotes Don Hall, a former director of the UH’s Institute for Astronomy, who claims that “university researchers never work on technology for military use.” He follows up with, “In some instances the upgrades piggyback off each other.” While perhaps not outright duplicitous, Hall’s statement certainly attempts to downplay the actual intimate relationship between the Mauna Kea telescopes and U.S. military operations.

The truth is that current telescopes at Mauna Kea are working on technology that bolsters U.S. military power. Meanwhile, the U.S. maintains an army training ground at Pōhakuloa in the saddle between Mauna Kea and Mauna Loa, and militarization of Hawai‘i has been and continues to be incredibly violent and seemingly insatiable. Although my central focus is a critique of the TMT’s capitalist-colonialist violence, its relationship with the U.S. military-industrial complex, as well as Hawai‘i’s violent and ongoing militarization by U.S. empire, should not be disregarded. This is especially concerning as the TMT’s potential collaboration with U.S. empire is being funded by governments like Canada, Japan, China, and India.

These discourses of science should continue to be interrogated for how they hide (settler) colonialism, racism, militarization, empire building and capitalism.