The American Dream: Living to 18

“What do you hope to accomplish with this protest,” I asked a 13-year-old girl marching in Staten Island, N.Y., last August, protesting the police killing of Eric Garner.

“To live until I’m 18,” the young teen, named Aniya, replied. Could that possibly be the American dream today?

Aniya went on: “You want to get older. You want to experience life. You don’t want to die in a matter of seconds because of cops.” It’s that sentiment that has fueled the Black Lives Matter movement across the country.

Most recently, a week of protest in Baltimore was largely quelled when a remarkable prosecutor announced that six police officers would be charged in the death of Freddie Gray. Marilyn Mosby, the 35-year-old state’s attorney for the city of Baltimore, is the youngest lead prosecutor in any major U.S. city. Just 100 days into office, she made national headlines on Friday, May 1, with the stunning announcement that the officers would face various charges, from assault to second-degree murder.

According to police reports, Baltimore Police Lt. Brian Rice was on bicycle patrol on the morning of April 12 when he made eye contact with Freddie Gray, who then ran. Rice pursued Gray, joined by officers Garrett Miller and Edward Nero. A bystander videotaped Gray screaming in pain as he was dragged into a patrol wagon. Though he asked for medical help repeatedly, none was given. He soon became unresponsive. Other police involved in his arrest and transport did nothing either. His family reported that his spinal cord was 80 percent severed, and his voice box crushed. After a week in a coma, he died. 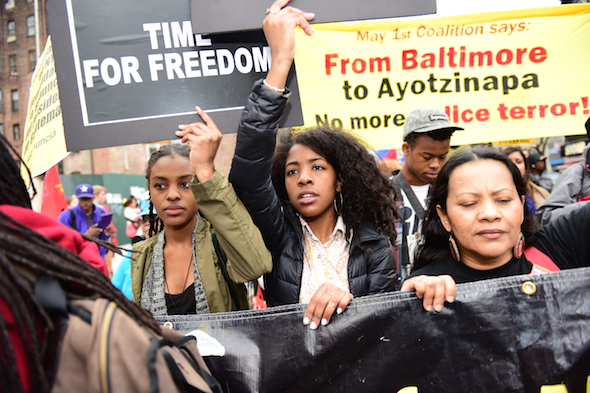 New York City, May 1, 2015: Demonstrators march from Union Square Park to Foley Square in celebration of International Workers’ Day and to demand accountability from law enforcement in recent police brutality cases across the U.S. (Shutterstock)

Gene Ryan, president of Baltimore’s police union, the Fraternal Order of Police (FOP) Lodge No. 3, said, shockingly, “The images seen on television look and sound much like a lynch mob.” These words are unfathomable, uttered by a white man describing African-Americans protesting the death of another African-American man whose neck was broken while in police custody. Then, at the same press conference, Michael Davey, the FOP attorney spoke up, defending the police for chasing Gray: “If you are in a high-crime area, and you flee from the police unprovoked, the police have the legal ability to pursue you.” So Freddie Gray was arrested for running while black?

The outcry has been consistent and growing, after each high-profile police killing of people of color. Eric Garner’s death by police chokehold on July 17, 2014, went unpunished. The district attorney for Staten Island, Daniel Donovan Jr., declined to press charges against any of the officers. Donovan, a Republican, was rewarded this week, winning a seat in Congress representing Staten Island, replacing Rep. Michael Grimm, who resigned in disgrace after being indicted for multimillion-dollar tax evasion. (Grimm also notoriously physically threatened a reporter on live television after the reporter asked him about the charges. Grimm told the reporter: “I’ll break you in half. Like a boy.”)

Back in Baltimore, many people heaved a sigh of relief after prosecutor Marilyn Mosby announced that she had filed charges against the six police officers. “I come from five generations of law enforcement,” she said. “My father was an officer. My mother was an officer, several of my aunts and uncles. My recently departed and beloved grandfather was one of the founding members of the first black police organization in Massachusetts.”

Marilyn Mosby went on: “To those that are angry, hurt or have their own experiences of injustice at the hands of police officers, I urge you to channel the energy peacefully as we prosecute this case. I have heard your calls for ‘no justice, no peace’; however, your peace is sincerely needed, as I work to deliver justice on behalf of Freddie Gray.”

She closed with what is certainly unique in the annals of prosecutorial oration: “Last, but certainly not least, to the youth of this city, I will seek justice on your behalf. This is your moment. Let’s ensure that we have peaceful and productive rallies that will develop structural and systemic changes for generations to come. You’re at the forefront of this cause. And as young people, our time is now.”

With determination like this, demanding accountability for all, maybe Aniya will get her wish: to celebrate her 18th birthday, and many, many more.

Amy Goodman is the host of Democracy Now!, a daily international TV/radio news hour airing on more than 1,200 stations in North America. She is the co-author of The Silenced Majority, a New York Times best-seller.