American Dreaming, From G1 to Bilderberg

11 Jun 2015 – What’s the connection between the G7 summit in Germany, President Putin’s visit to Italy, the Bilderberg club meeting in Austria, and the TTIP – the US-EU free trade deal – negotiations in Washington?

We start at the G7 in the Bavarian Alps – rather G1 with an added bunch of “junior partners” – as US President Barack Obama gloated about his neo-con induced feat; regiment the EU to soon extend sanctions on Russia even as the austerity-ravaged EU is arguably hurting even more than Russia.

Predictably, German Chancellor Angela Merkel and French President Francois Hollande caved in – even after being forced by realpolitik to talk to Russia and jointly carve the Minsk-2 agreement.

The hypocrisy-meter in the Bavarian Alps had already exploded with a bang right at the pre-dinner speech by EU Council President Donald Tusk, former Prime Minister of Poland and certified Russophobe/warmonger: “All of us would have preferred to have Russia round the G7 table. But our group is not only a group (that shares) political or economic interests, but first of all this is a community of values. And that is why Russia is not among us.”

So this was all about civilized “values” against “Russian aggression.”

The “civilized” G1 + junior partners could not possibly argue whether they would collectively risk a nuclear war on European soil over a Kiev-installed ‘Banderastan’, sorry, “Russian aggression.”

Instead, the real fun was happening behind the scenes. Washington factions were blaming Germany for making the West lose Russia to China, while adult minds in the EU – away from the Bavarian Alps – blamed Washington.

Even juicier is a contrarian view circulating among powerful Masters of the Universe in the US corporate world, not politics. They fear that in the next two to three years France will eventually re-ally with Russia (plenty of historical precedents). And they – once again – identify Germany as the key problem, as in Berlin forcing Washington to get involved in a Prussian ‘Mitteleuropa’ Americans fought two wars to prevent.

As for the Russians – from President Putin and Foreign Minister Lavrov downwards – a consensus has emerged; it’s pointless to discuss anything substantial considering the pitiful intellectual pedigree – or downright neo-con stupidity – of the self-described “Don’t Do Stupid Stuff” Obama administration policy makers and advisers. As for the “junior partners” – mostly EU minions – they are irrelevant, mere Washington vassals.

It would be wishful thinking to expect the civilized “values” gang to propose alternatives for the overwhelming majority of citizens of G7 nations getting anything other than Mac-jobs, or barely surviving as hostages of finance-junkie turbo-capitalism which only benefits the one percent.Rather easier to designate the proverbial scapegoat – Russia – and proceed with NATO-infused fear/warmongering rhetoric.

Iron Lady Merkel also found time to pontificate on climate change – instilling all and sundry to invest in a “low-carbon global economy.” Few noticed that the alleged deadline for full “decarbonization” was set for the end of the 21st century, when this planet will be in deep, deep trouble. 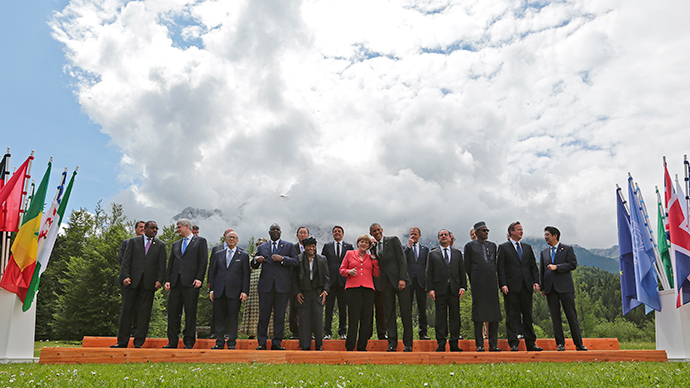 Obama’s neocon-induced newspeak continues to rule that Russia dreams of recreating the Soviet empire. Now compare it to what President Putin is telling Europe.

Last week, Putin found time to give an interview to the Milan-based Corriere della Sera at 2 am; the interview was published as the Bavarian Alps show went on, and ahead of Putin’s June 10 visit to Italy. Russia’s geopolitical interests and US- Russia relations are depicted in excruciating detail.

So Putin was a persona non grata at the G1 plus junior partners? Well, in Italy he visited the Milan Expo; met Prime Minister Renzi and Pope Francis; reminded everyone about the “privileged economic and political ties” between Italy and Russia; and stressed the 400 Italian companies active in Russia and the million Russian tourists who visit Italy every year.

Crucially, he also evoked that consensus; Russia had represented an alternative view as a member of the G8, but now “other powers” felt they no longer needed it. The bottom line: it’s impossible to have an adult conversation with Obama and friends.

And right on cue, from Berlin –where he was displaying his sterling foreign policy credentials, Jeb Bush, brother of destroyer of Iraq Dubya Bush, fully scripted by his neocon advisers, declared Putin a bully and rallied Europe to fight, what else, “Russian aggression.” 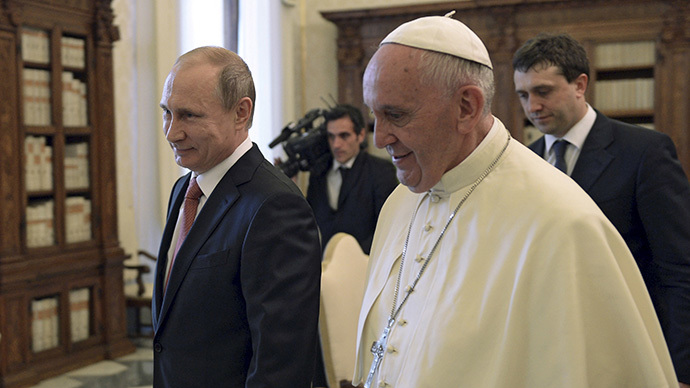 The rhetorical haze over what was really discussed in the Bavarian Alps only began to dissipate at the first chords of the real sound of music; the Bilderberg Group meeting starting this Thursday at the Interalpen-Hotel Tyrol in Austria, only three days after the G1 plus junior partners.

Possible conspiracies aside, Bilderberg may be defined as an ultra-select bunch of elite lobbyists – politicians, US corporate honchos, EU officials, captains of industry, heads of intelligence agencies, European royals – organized annually in a sort of informal think tank/policy-forming format, to advance globalization and all crucial matters related to the overall Atlanticist agenda. Call it the prime Atlanticist Masters of the Universe talkfest.

To make things clear – not that they are big fans of transparency – the composition of the steering committee is here. And this is what they will be discussing in Austria.

Naturally they will be talking about “Russian aggression” (as in who cares about failed Ukraine; what we need is to prevent Russia from doing business with Europe).

Naturally they will be talking about Syria (as in the partition of the country, with the Caliphate already a fact of post-Sykes-Picot life).

Naturally they will be talking about Iran (as in let’s do business, buy their energy and bribe them into joining our club).

But the real deal is really the Transatlantic Trade and Investment Partnership (TTIP) – the alleged “free trade” deal between the US and the EU. Virtually all major business/finance lobbyists for the TTIP will be under the same Austrian roof.

And not by accident Bilderberg starts one day before “fast track” presidential authority is to be debated at the US Congress. 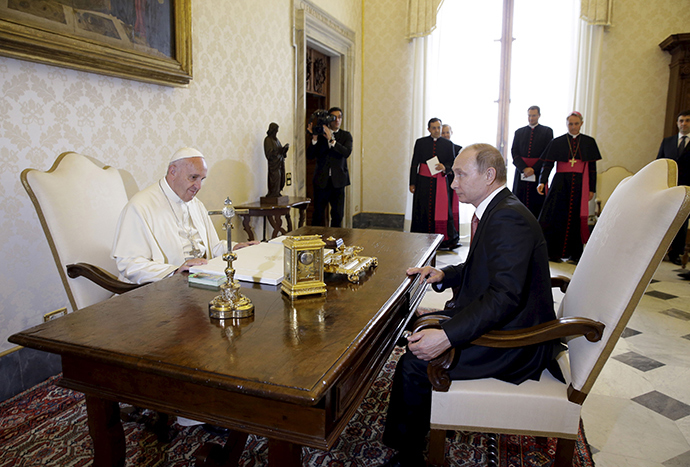 WikiLeaks and a ton of BRICS

Enter WikiLeaks, with what in a fairer world would be a crucial spanner in the works.

The fast track authority would extend US presidential powers for no less than six years; that includes the next White House tenant, which might well be ‘The Hillarator’ or Jeb “Putin is a bully” Bush.

This presidential authority to negotiate dodgy deals includes not only the TTIP but also the Trans-Pacific Partnership (TPP) and the Trade in Services Agreement (TiSA).

WikiLeaks, just in time, published the Healthcare Annex to the secret draft “Transparency” chapter of the TPP, along with each country’s negotiating position. No wonder this draft is secret. And there’s nothing “transparent” about it; it’s an undisguised hold-up of national healthcare authorities by Big Pharma.

The bottom line is that these three mega-deals – TTP, TTIP and TiSA – are the ultimate template of what could be politely described as global corporate governance, a Bilderberg wet dream. The losers: nation-states, and the very concept of Western democracy. The winners: mega-corporations.

Julian Assange, in a statement, succinctly nailed it “It is a mistake to think of the TPP as a single treaty. In reality there are three conjoined mega-agreements, the TiSA, the TPP and the TTIP, all of which strategically assemble into a grand unified treaty, partitioning the world into the West versus the rest. This ‘Great Treaty’ is described by the Pentagon as the economic core to the US military’s ‘Asia Pivot.’ The architects are aiming no lower than the arc of history. The Great Treaty is taking shape in complete secrecy, because along with its undebated geostrategic ambitions it locks into place an aggressive new form of transnational corporatism for which there is little public support.”

So this is the real Atlanticist agenda – the final touches being applied in the arc spanning the G1 + added junior partners to Bilderberg (expect a lot of crucial phone calls from Austria to Washington this Friday). NATO on trade. Pivoting to Asia excluding Russia and China. The West vs. the rest.

Now for the counterpunch. As the show in the Bavarian Alps unrolled, the first BRICS Parliamentarian Forum was taking place in Moscow – ahead of the BRICS summit in Ufa next month.

Neocons – with Obama in tow – knock themselves out dreaming that Russia has become “isolated” from the rest of the world because of their sanctions. Since then Moscow has signed major economic/strategic contracts with at least twenty nations. Next month, Russia will host the BRICS summit – 45 percent of the world’s population, a GDP equivalent to the EU, and soon bigger than the current G7 – as well as the Shanghai Cooperation Organization (SCO) summit, when India and Pakistan, currently observers, will be accepted as full members.

G1 plus junior partners? Bilderberg? Get a job; you’re not the only show in town, any town.