“Combat Proven”: The Booming Business of War in Israel

5 Jun 2015 – The Israel Trade Fairs and Convention Center was bustling with military personnel. Tall, broad-shouldered soldiers donning masks and sunglasses had their guns at the ready, and a mini-drone built at Ariel University, an Israeli school located in the occupied West Bank, went up in the air, flying high as the press snapped photos. 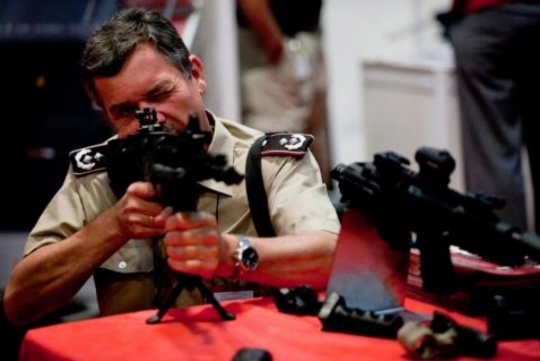 This was not war, but one of the many demos held at the ISDEF expo, an annual June event that attracts thousands of security officials and professionals interested in weapons. Arms fairs in Israel showcase the latest products the profitable Israeli weapons industry manufactures — and the demos are the perfect place to show those products off.

As the demo was beginning, Jonas Zelken, a presenter at the weapons fair, looked on as the soldiers — who formerly served in an Israeli counterterrorism unit — threw a mock grenade into a model home in what looked like enemy territory in an Arab country. Zelken eagerly explained to attendees that they were seeing “beautiful” soldiers setting up a mock communications base during battle and a “sexy” drone. He also reeled off the names of companies whose products the soldiers were showcasing at the Israeli arms expo: Spuhr, a Swedish company that makes rifle mounts for sight; InteliComm, an American company that produces communications equipment; and Netline, an Israeli company that manufactures a jammer to prevent improvised explosive devices from going off. 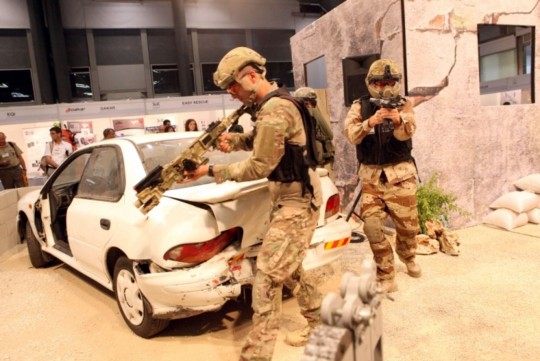 A demonstration at the ISDEF conference (isdefexpo.com)

As weapons demos and presentations on Israeli fighting tactics took place, officials from the Czech Republic, Mexico, Singapore, Germany, Greece and other countries, many of them in uniform, walked around the center, checking out the shiny wares they could buy for their own militaries — including drones, armored vehicles and rifles. Attendees eagerly picked up the rifles and pretended to fire them, while others played with toy drones meant to look like the real thing.

The featured arms companies, like the attendees interested in buying their products, came from around the world, but Israeli companies far outnumbered other nations. The fair is put on with the active help and cooperation of the Israeli government, and the ISDEF expo board of advisers is composed of elite former Israeli military officers. The U.S. Department of Commerce is the only foreign governmental body to co-sponsor the event.

Israel has established itself as a leading hub for weapons makers, capitalizing on the constant state of conflict the country is in and the close coordination between the military and the weapons industry. At the ISDEF opening ceremony, Ziva Eger, the Israeli Ministry of Economy’s director of the division for foreign investment and industrial cooperation, boasted about how Israel takes “technology from the defense sector and just implements it to the civilian sector.”

In Israel, nearly 6,800 individuals deal in weapons exports at over 1,000 companies, according to Defense Ministry data from 2013. The country’s weapons industry brought in about $5.6 billion last year, making Israel the eighth largest weapons exporter globally, according to the Stockholm International Peace Research Institute. Former Israeli Defense Minister Ehud Barak has said that 150,000 Israeli households rely on the weapons industry for income. While last year’s earnings were actually a drop from a high of $7.5 billion in revenue in 2012, a decrease attributed by Israel’s Defense Ministry to budget cuts in the U.S. and Europe, Israel is among the world’s top arms exporters per capita. In fact, the U.S. effectively provides a subsidy to the Israeli weapons business: While about 75 percent of the $3.1 billion in U.S. military aid to Israel must be spent on American weapons, 25 percent can be spent on domestic Israeli arms makers — a situation unique to Israel. Even when Israel buys U.S. arms, it sometimes requests that those weapons be built with Israeli components.

The U.S. subsidy is helping to fuel the business of war in Israel. It’s a booming industry due in no small part to the ever-increasing frequency of the country’s battles with militant groups in neighboring Lebanon and Gaza, the coastal strip that Israel holds under a crippling air, land and sea blockade. In 2006, Israel went to war in Lebanon, killing at least 900 civilians. Two years later, Israel invaded Gaza in what a U.N. Human Rights report called “a deliberately disproportionate attack designed to punish, humiliate and terrorize a civilian population.” Operation Cast Lead, as the 2008 – 2009 attack was called, killed 1,400 people, more than half of them civilians. In 2012, Israel bombed Gaza for about a week before a U.S. and Egyptian-brokered ceasefire went into effect. But the most devastating Israeli attack on the strip occurred last summer, when Israel waged a 50-day battle against Hamas that killed 2,200 people, the majority of them civilians.

The wars on Gaza have had a devastating impact on the population there, leaving half of Palestinian adolescents with symptoms of full or partial post-traumatic stress disorder, according to a study published in Arab Journal of Psychiatry. But in Israel, the wars are good for business.

In 2013, Yotam Feldman, an Israeli journalist and filmmaker, released The Lab, a documentary positing that war is beneficial for the Israeli economy. Feldman’s film argues that the Palestinian territories are the “lab” where Israel uses its weaponry. Israeli companies profit from war because their products are “tested” on Palestinians, Feldman argued — particularly the residents of Gaza. “After every campaign of the kind that is now taking place in Gaza, we see an increase in the number of customers from abroad,” Eli Gold, CEO of Israeli arms company Meprolight, told the Israeli daily Haaretz last year.

The Israeli company BlueBird Aero Systems, which makes micro surveillance drones that are used by the Israeli military, boasts of how their products are “combat proven.” Itai Toren, the company’s vice president for business development and marketing, explained his products to interested customers at the fair as a video from his company’s drones played in the background. While Toren wouldn’t tell me where the videos were filmed, he was more forthcoming about why his company finds success.

“The thing that I can say is our products are operational here in Israel since 2006. In the last conflict, last summer, our UAVs [unmanned aerial vehicles] performed over 700 operational sorties,” he said. “Today’s customers are looking for proven, mature systems — and that’s our systems. … Israeli companies are relying very much on the field experience of their customers, both in Israel and abroad.” The Israel Defense Forces (IDF) declined to comment on whether that claim was true, but news outlets have reported that BlueBird drones were used in Gaza in the past.

The “combat-proven” products are a big draw for international delegates at the expo like Yoshiki Yamada and Kaoru Kashimoto, who both work for the technology branch of Japan’s Ministry of Defense.

“Israel is a high-risk place. You are surrounded by unfriendly countries. So you have experience of an attack,” said the uniformed Yamada through Kashimoto, who translated for me. “We believe that the Israelis will show us the key issue” — the best products to use in combat situations. Kashimoto added that “in Europe and the U.S., there are so many experts. But Israel is more close to the real [combat situations].”

Bolstering the Israeli industry is the revolving door between the IDF and the technology and weapons sector. The vast majority of Israeli Jews are required to serve in the IDF, so it’s no surprise that people like Oded Proyeckt, the owner of Masada Armour, served in the army before going on to profit from the war industry. His company sells uniforms and armor to the special forces of countries like Uganda and Nigeria, whose militaries have been accused of severe human rights abuses. He said his experience in the army informed his company’s products.

The September 11 attacks proved to be another crucial factor to the Israeli weapons industry’s success. The Israeli homeland security industry cashed in on an American market eager for tested solutions as the so-called “war on terror” began. For instance, Verint and Narus are two technology companies linked to the Israeli security community. Their technology swept up the phone communications of Americans who use Verizon and AT&T for the National Security Agency after September 11, according to sources who spoke to journalist James Bamford.

Eyal Raz, the product director for the Israeli surveillance company Mer Group, said the market in America for Israeli companies “flourished” after the September 11 attacks, though his company has had trouble breaking in because of competitors like Palantir, an American company whose data-mining software has been sold to U.S. intelligence agencies.

“During September 11, I was working in a different company, a company doing interception of signal information,” said Raz. “And those days, just after September 11, everyone wanted to listen to everything. So we sold a lot of systems back then.”

The next Israeli war on Gaza is inevitable. The blockade continues to grind on, leaving the coastal strip in a state of misery. In recent weeks, militant groups have fired rockets into Israel, increasing tensions on the Gaza-Israel border. With much of the strip still in ruins, another assault would be a catastrophe. But when that war comes, the weapons makers are guaranteed to cash in.

Leo Gleser, president of the Israeli company International Security and Defence Systems, told me, “We don’t have a normal situation with Lebanon nor with Syria. The day that we see in the Middle East a good neighborhood with friends, believe me, nobody’s going to do profitable business in defense.”

For an arms industry that relies on marketing “combat proven” products, the next battle can’t come soon enough.