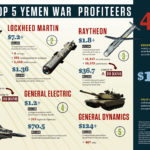 Here’s Exactly Who’s Profiting from the War on Yemen
Alex Kane – In These Times Magazine, 27 May 2019

June 2019 – The war has devastated Yemen’s infrastructure, destroyed or damaged more than half of Yemen’s health facilities, killed more than 8,350 civilians, injured another 9,500 civilians, displaced 3.3 million people, and created a humanitarian disaster that threatens the lives of millions as cholera and famine spread through the country. U.S. arms merchants, however, have grown rich. The U.S. could stop weapon sales if it wanted to.

How Israel Became a Hub for Surveillance Technology
Alex Kane – The Intercept, 24 Oct 2016

Israel’s cyberwarriors are increasingly taking their skills to the private surveillance industry. And now Israel, the self-proclaimed “startup nation,” is selling its products around the world to governments that want to spy on their own citizens.

A Look Back at What Snowden Told the World about the U.S.-Israel Relationship
Alex Kane | Mondoweiss – TRANSCEND Media Service, 3 Oct 2016

A Nuke-Free Israel Will Create a More Stable Middle East – The American policy of shielding Israel’s nuclear weapons continues to be the main obstacle to nuclear disarmament in the region.

The wars in Gaza have devastated the population, but they’ve benefited weapons manufacturers looking to market their products. Inside an Israeli arms expo.

Some companies have factories located in one of the 125 officially recognized settlements in occupied Palestine, which are illegal under international law. Others contribute to the maintenance of an occupation through cooperation with the Israel Defense Forces, whose main goal is to protect illegal settlements and exercise dominion over the lives of millions of Palestinians. Buying these products gives profits to companies that exploit Palestinian land and resources.

Ahava is owned by entities deeply involved in Israel’s settlement project in the occupied West Bank. Activists are fighting to show it can’t hide its dirty side.