4 Jun 2015 – Iraqi security forces lost 2,300 Humvee armored vehicles when Islamic State overran the northern city of Mosul in June 2014, Prime Minister Haider al-Abadi said on Sunday [31 May] in an interview with Iraqiya state television. Coupled with previous losses of American weapons, the conclusion is simple: The United States is effectively supplying Islamic State with tools of war the militant group cannot otherwise hope to acquire from its patrons. 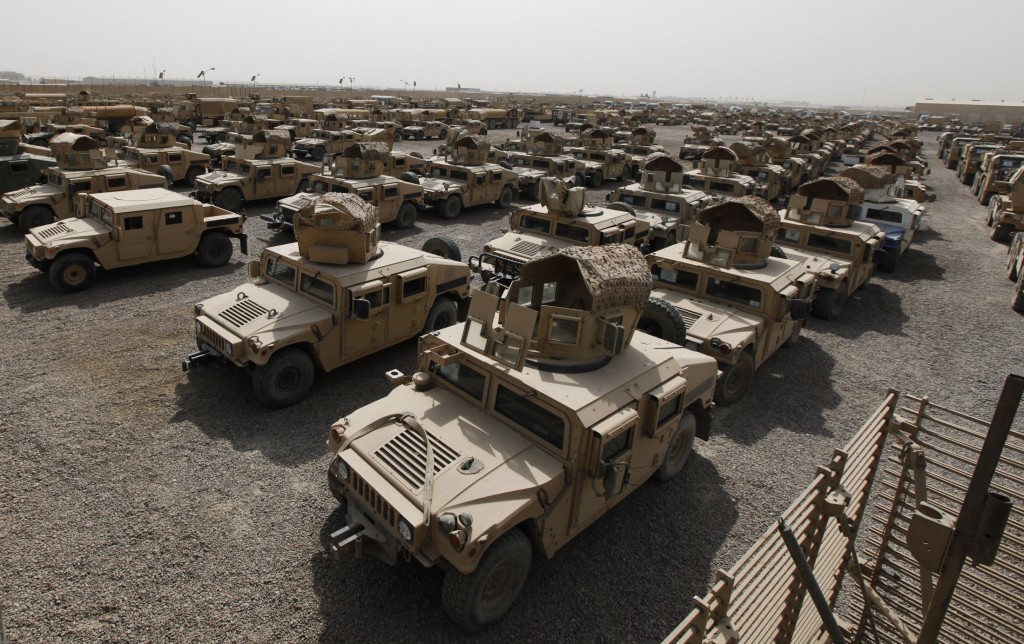 A view of humvees parked at a courtyard at Camp Liberty in Baghdad, September 30, 2011. REUTERS/Mohammed Ameen

In addition to the Humvees, Iraqi forces previously abandoned significant types and numbers of heavy weapons to Islamic State. For example, losses to Islamic State include at least 40 M1A1 main battle tanks, as well as small arms and ammunition, including 74,000 machine guns, and as many as 52 M198 howitzer mobile gun systems.

“We lost a lot of weapons,” Abadi admitted.

To help replenish Iraq’s motor pool, the U.S. State Department last year approved a sale to Iraq of 1,000 Humvees, along with their armor upgrades, machine guns and grenade launchers. The United States previously donated 250 Mine Resistant Armored Personnel carriers (MRAPs) to Iraq, plus unaccountable amounts of material left behind when American forces departed in 2011. The United States is currently in the process of moving to Iraq 175 M1A1 Abrams main battle tanks, 55,000 rounds of main tank-gun ammunition, $600 million in howitzers and trucks, $700 million worth of Hellfire missiles and 2,000 AT-4 rockets.

The Hellfires and AT-4′s, anti-tank weapons, are presumably going to be used to help destroy the American armor in the hands of Islamic State. The United States is also conducting air strikes to destroy weapons seized by Islamic State. It’s a surreal state of affairs in which American weaponry is being sent into Iraq to destroy American weaponry previously sent into Iraq. If a new sequel to Catch-22 were to be written, this would be the plot line.

The United States also continues to spend money on training the Iraqi military. Some 3,000 American soldiers are currently in Iraq preparing Iraqi soldiers to perhaps someday fight Islamic State; many of the Americans are conducting the training on former military bases abandoned by the United States following Gulf War 2.0. In addition, some $1.2 billion in training funds for Iraq were tucked into an omnibus spending bill that Congress passed earlier this year. This is in spite of the sad reality that from 2003 to 2011, the United States spent $25 billion training Iraqi security forces.

The return on these training investments? The Iraqi army had 30,000 soldiers in Mosul, who ran away in the face of about 1,000 Islamic State fighters. The same thing happened just a few weeks ago in Ramadi, where 10,000 Iraqi soldiers, collapsing faster than a cardboard box in the rain, fled ahead of only 400 Islamic State fighters. The Iraqis left behind more weapons.

In an interview with me a year ago, Chris Coyne, professor of economics at the Mercatus Center at George Mason University, predicted this exact scenario well before the United States sent troops back into Iraq:

“The United States government provided significant amounts of military hardware to the Iraqi government with the intention that it would be used for good. However, during the Islamic State offensive, many of the Iraqis turned and ran, leaving behind the United States-supplied hardware. This weapons windfall may further alter the dynamics in Syria.

“Now the United States government wants to provide more military supplies to the Iraqi government to combat Islamic State. But I haven’t heard many people recognizing, let alone discussing, the potential negative unintended consequences of doing so. How do we know the weapons and supplies will be used as desired? Why should we have any confidence that supplying more military hardware to a country with a dysfunctional and ineffective government will lead to a good outcome either in Iraq or in the broader region?”

The impact of all these heavy weapons falling into Islamic State hands is significant for American foreign policy goals in the Middle East. A report prepared for the United Nations Security Council warns that Islamic State possesses sufficient reserves of small arms, ammunition and vehicles to wage its war in Syria and Iraq for two more years.

And that presumes the United States won’t be losing more tools of war to Islamic State, thanks to the Iraqi army.

Peter Van Buren, who served in the State Department for 24 years, is the author of We Meant Well: How I Helped Lose the Battle for the Hearts and Minds of the Iraqi People, a look at the waste and mismanagement of the Iraqi reconstruction. His latest book is Ghosts of Tom Joad: A Story of the #99 Percent.