The forthcoming film, A Bold Peace: Costa Rica’s Path of Demilitarization, should be given every possible means of support and promotion. After all, it documents the blatant violation of laws of physics, human nature, and economics, as understood in the United States — and the violators seem positively gleeful about it.

In 1948 Costa Rica abolished its military, something widely deemed impossible in the United States. This film documents how that was done and what the results have been. I don’t want to give away the ending but let me just say this: there has not been a hostile Muslim takeover of Costa Rica, the Costa Rican economy has not collapsed, and Costa Rican women still seem to find a certain attraction in Costa Rican men.

How is this possible? Wait, it gets stranger.

Costa Rica provides free, high-quality education, including free college, as well as free healthcare, and social security. Costa Ricans are better educated than Americans, live longer, are reported as happier (in fact, happiest in the world in various studies), and lead the world in the use of renewable energy (100% renewable energy lately in Costa Rica). Costa Rica even has a stable, functioning democracy with far greater (required) participation, ballot access, diversity of platforms, and popular support than the gerrymandered, Citizen-United, Diebolded, home of widely tuned-out Bush v. Clinton reruns.

How is it that U.S. presidential candidate Bernie Sanders only ever mentions Scandinavia as a place to learn from, and usually not military-free Iceland either? Could it be that military abolition is just not an acceptable topic in U.S. politics? 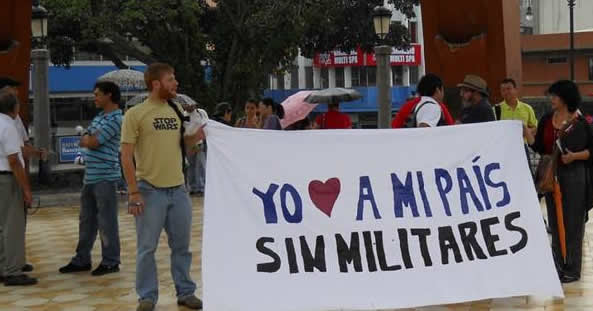 Costa Rica has developed a culture of peace, including an educational system that teaches children nonviolent conflict resolution. As someone who grew up being told that we should not use violence, while simultaneously noticing that my society’s biggest public project was the U.S. military, I can only imagine the power of consistency found in an educational curriculum that walks its own talk. Costa Rica has built up a society of low violence and of, as one speaker in the film describes it, “an attitude of non-aggression toward the poor.” The Ticos describe support for the welfare state and for cooperative businesses as “solidarity” and “love.”

How did this come to be? The film provides more context than I was previously aware of. Rafael Calderón Guardia, president from 1940 to 1944, began the welfare state in a major way through a unique pre-Cold War coalition of support that included the Catholic church and the communist party. In 1948 Calderón ran for president again, lost, and refused to recognize the results. A remarkable man named José Figueres Ferrer, also known as “Don Pepe,” who had educated himself at Boston Public Library and returned to Costa Rica to start a collective farm, led a violent revolution and won.

Figueres made a pact with the communists to protect the welfare state, and they disbanded their army. And after his own troops threatened a rightwing coup, he disbanded his own army, that of the nation of Costa Rica, saying:

Of course Costa Rica could abolish its army only because it had no enemies!

So you might think, if such a mental process can be called thinking. In reality, Costa Rica was surrounded by enemies, hostile dictatorships all around, not to mention the longstanding Monroe Doctrine U.S. dominance of any Latin American nation that stepped out of line. On top of which Calderón and friends plotted a counter-revolution from Nicaragua and attempted it in 1949 and again in 1955, with the support of U.S.-backed Nicaraguan dictator Anastasio “Tacho” Somoza García.

What did Costa Rica do? On the model that Jefferson and Madison envisioned for the United States, Figueres maintained the ban on any standing army but called up a temporary citizens’ militia to fight off the invasion successfully twice.

But what if a more powerful invasion had come? I think there are two answers to that. First, Costa Rica is not occupying nations all over the globe, blowing up families with drones, torturing people in secret prisons, arming dictatorships, defending Israel’s acts of genocide, etc. — that is to say, Costa Rica is not creating enemies. Secondly, if the United States were to attack Costa Rica, no military might on the Costa Rican side could possibly prevail. The best defense against such an attack is, in fact, to possess no military that might be blamed for some incident as grounds for war.

Figueres used a citizens militia and then disbanded it. He expanded the welfare state, extended the right to vote to women and Afro-Caribbeans, and nationalized banks and electricity. Then he retired peacefully, later to be elected president twice more, in 1953 and 1970. He lived until 1990, the victorious general who did what Eisenhower never dared: abolished the military industrial complex.

The U.S. government, under President Reagan, tried to force Costa Rica into military conflict, but Costa Rica proclaimed neutrality. It did not maintain this neutrality as absolutely as one might like, but it never became home to a big U.S. military base as did Honduras.

In 1985, Oscar Arias was elected president on a peace platform, defeating Calderón’s son campaigning on a platform of militarization. Although the U.S. was threatening sanctions, and although 80% of the Costa Rican people opposed the Sandinista government in Nicaragua, over 80% in Costa Rica opposed any militarization. Reagan scared Americans of communists in Nicaragua, but seems not to have scared the Ticos at all. On the contrary, Arias met repeatedly with Reagan, turned him down on at least all the main points, and gathered nations together to negotiate peace in Central America — for which he was given a Nobel Peace Prize that may have actually served an appropriate purpose.

What withstood Reagan’s pressure was not an individual or a political party, but Costa Rica’s culture of peace. A new threat came in 2003, when Costa Rica joined the Coalition of the Willing (to attack Iraq). Costa Rica provided only its name, no actual participation. But a law student named Luis Roberto Zamora Bolanos successfully sued his own government in Costa Rican courts and forced Costa Rica out of the coalition.

While the film doesn’t go into it much, the same lawyer sued Arias and others repeatedly to keep weapons companies and U.S. ships out of Costa Rican territory. In 2010 the U.S. helped overthrow the president of Honduras and flew him to Costa Rica. The U.S. uses its drug war as an excuse to put military ships in Costa Rican waters.

In 2010 Nicaragua took over a Costa Rican island, at least in the view of Costa Rica. Had Costa Rica possessed a military, a war would likely have begun. While Costa Rica did send its “police” to the area, not one bullet was fired. Rather the dispute was resolved in international courts, as all such disputes should be.

Costa Rica has now gone for 66 and a half years without the problems that militaries have brought to other Latin American nations. Militaries in small nations have been used for U.S.-backed coups, but not for anything more beneficial. The film cites statistics: the United States has directly overthrown 41 Latin American governments, and indirectly another 24, between 1898 and 1994.

The idea that Costa Rica needs no military because it is protected under a U.S. military umbrella would be laughable if there weren’t people who believe it. Costa Rica has opposed U.S. militarism and promoted demilitarization around the world, running up against powerful U.S. lobbying on behalf of U.S. weapons dealers. When Arias obtained a U.N. vote on a treaty to ban arms sales to any nation spending more on weapons than on its people, the only No vote was from the U.S.

Costa Rica is also facing the destructive effects of corporate trade pacts, rising inequality, and crushing poverty. Yet it is still far from as unequal as the U.S.

The film presents a fair portrait, flaws included. I watched it with my 9-year-old son who now wants to move there. The film includes video of past and current presidents, activists, professors, and journalists. It even includes extensive commentary from Luis Guillermo Solís Rivera as a long-shot presidential candidate seeking to uphold Costa Rica’s pacifist traditions in a manner that Japan’s president is of course not attempting. Then we see Solís surge ahead and win. He is now president.

Costa Rica is an inspiration to those of us seeking to abolish war.

Anticopyright: Editorials and articles originated on TMS may be freely reprinted, disseminated, translated and used as background material, provided an acknowledgement and link to the source, TMS: Film: Costa Rica Abolished Its Military, Never Regretted It, is included. Thank you.