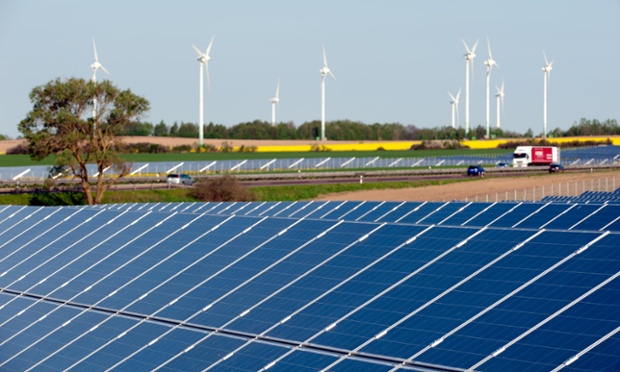 Renewable energy to grow from current levels of providing around a quarter of Europe’s energy to supplying half, leaked paper says. Photograph: Alamy

26 Jun 2015 – Europe will likely get more than half of its electricity from renewable sources by the end of the next decade if EU countries meet their climate pledges, according to a draft commission paper.

A planned overhaul of the continent’s electricity grids will now need to be sped up, says the leaked text, seen by the Guardian.

“Reaching the European Union 2030 energy and climate objectives means the share of renewables is likely to reach 50% of installed electricity capacity,” says the consultation paper, due to be published on 15 July. “This means that changes to the electricity system in favour of decarbonisation will have to come even faster.”

The EU has set itself a goal of cutting emissions 40% on 1990 levels by 2030, and an aspiration for a 27% share for renewables across Europe’s full energy mix, which includes sectors such as transport, agriculture and buildings that do not necessarily rely on electricity. Around a quarter of Europe’s electricity currently comes from renewable sources.

Oliver Joy, a spokesman for the European Wind Energy Association welcomed the draft text but noted the 27% goal for 2030 was non-binding, and some countries were looking likely to even miss an earlier goal, for 2020, that is binding.

“Even with a binding provision, we are seeing the Netherlands, UK and France potentially missing their 2020 target [to source a fifth of energy provision from renewables].”

Joy called for the commission to deliver a governance system for renewables that prevented slacker states from hiding behind the more fast-moving ones.

Downing Street would almost certainly resist more stringent oversight from Brussels on renewable energy. Other measures put up for discussion in the paper could be an anathema to the government’s eurosceptic backbenchers.

One question in the consultation document linking market distortions to divergent energy taxes and charges, leaves the door open for proposals to harmonise taxes. These would raise hackles with several countries, the Conservative MEP Ian Duncan warned.

“I can’t believe that common taxes are the right approach for opening up markets,” he told the Guardian. “If we get bogged down in the the notion of common taxes, it will drag the whole thing down – and it won’t be pretty I’m afraid.”

The paper also proposes intraday cross-border power trading between countries so that renewable energy can be instantly dispatched to meet demand, without the need for storage. This kind of trading only takes place on a day-ahead basis at present.