‘The Perpetrator Has Been Arrested, but the Killer Is Still at Large’

24 Jun 2015 – The massacre of nine African-American worshippers at the Emanuel African Methodist Episcopal Church in Charleston, S.C., has sent shock waves through the nation and could well blow the roof off the Confederacy. Dylann Storm Roof is accused of methodically killing the congregants, reloading his Glock pistol at least twice. He let one victim live, according to a person who spoke with the survivor, so she could tell the world what happened. This brutal mass killing was blatantly racist, an overt act of terrorism.

Those murdered included the minister of the historic church, 41-year-old Rev. Clementa Pinckney, who also was an elected state senator in South Carolina and who was leading a Wednesday night Bible-study group. Roof actually sat in on the group for an hour before the massacre.

What little we know of Roof’s motivation for his alleged crime comes from a website he is believed to have created. A manifesto posted on the site says: “I chose Charleston because it is most historic city in my state, and at one time had the highest ratio of blacks to Whites in the country. We have no skinheads, no real KKK, no one doing anything but talking on the internet. Well someone has to have the bravery to take it to the real world, and I guess that has to be me.” A survivor of the shooting said that Roof told a victim begging for him to stop the killing: “I have to do it. You’re raping our women and taking over the country. You have to go.” 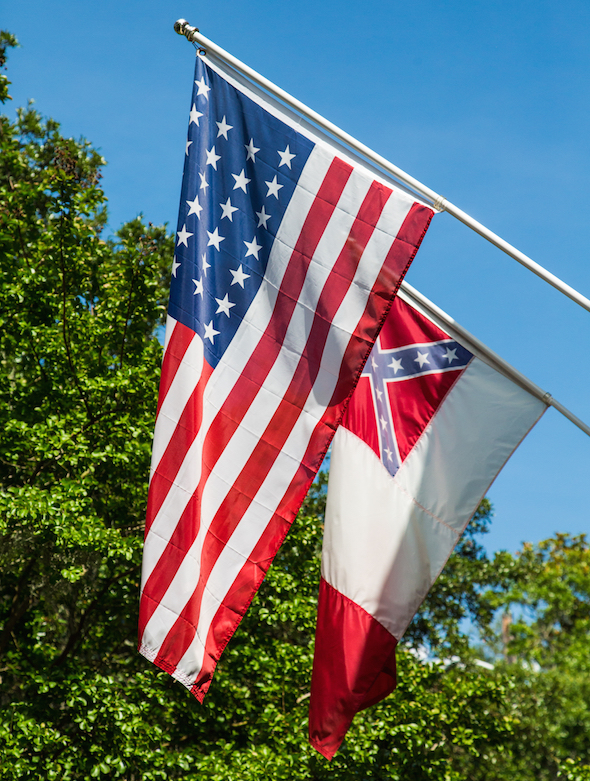 A Confederate flag flies behind the U.S. flag in Charleston, S.C., on Monday. (Darryl Brooks / Shutterstock.com)

The website includes photos of Roof brandishing a gun, the .45-caliber Glock that is likely the murder weapon, and the Confederate flag, leading to renewed efforts to remove this symbol of racism and hate from flying on public property. For decades, the Confederate flag flew above the South Carolina Statehouse, along with the U.S. flag and the state flag of South Carolina. After the NAACP began a boycott of the state in the year 2000, a compromise was reached. The Confederate flag was removed from the state Capitol dome and placed on statehouse grounds, alongside a Confederate war memorial.

Among those who first stood up last week in favor of removing the flag was a white Republican serving in the South Carolina legislature, Doug Brannon. He told us on “Democracy Now!”: “I woke up Thursday morning to the news of the death of these nine wonderful people. I knew something had to be done then. … Clementa Pinckney deserves this. Those nine people deserve this. Our state Capitol needs to be free of the flag.” When we asked him if he would consider a memorial to the victims of the Emanuel AME massacre, he said it was “a wonderful idea.”

The Rev. Dr. William J. Barber II is the president of the North Carolina NAACP. He heard about the slaughter on Wednesday night while in jail. “About 10 of us had been arrested in the state House in North Carolina for challenging extremist politicians who have passed the worst voter-suppression law in the country,” he said. Barber has led the “Moral Mondays” movement, with hundreds to thousands of people protesting weekly against the agenda being passed by North Carolina’s Republican-controlled state government. He favors removal of the Confederate flag, which he calls “vulgar,” but suggested that passing policy would be a more potent memorial to Clementa Pinckney and the other victims.

Wal-Mart, Amazon and other major retailers have pulled Confederate paraphernalia from their shelves. Alabama has taken down the flag, and other states, including South Carolina, are following. The symbol of the Southern states’ rebellion and secession, of waging war to protect slavery, will be less visible. But the fight for equality, waged 200 years ago by the very founders of Charleston’s Emanuel AME church, continues. As the Rev. Barber says, systemic change is essential: “The perpetrator has been arrested, but the killer is still at large.”

Amy Goodman is the host of “Democracy Now!,” a daily international TV/radio news hour airing on more than 1,200 stations in North America. She is the co-author of “The Silenced Majority,” a New York Times best-seller.