What We Learned about Mercury from the Messenger Spacecraft

22 June 2015 – On April 30, the Messenger spacecraft performed a planned impact onto the surface of Mercury, ending the four-year mission to the Solar System’s innermost planet. The probe fired the last of its maneuvering propellant two days before, ensuring contact with Earth for as long as possible. In the end, only 10 minutes of data was lost out of the 1,500 days worth of information collected by Messenger. 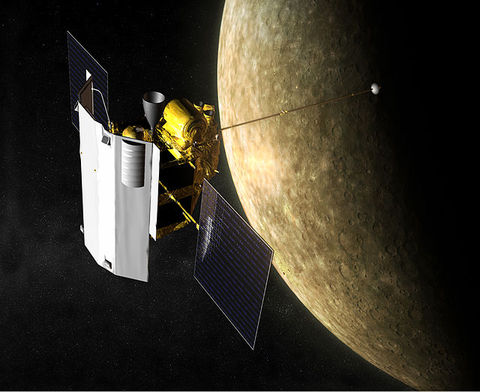 Artist depiction of Messenger in orbit around Mercury. Credit: NASA/JHUAPL/CIW

Messenger (MErcury Surface, Space ENvironment, GEochemistry and Ranging) was launched by NASA on August 3, 2004 and operated by scientists at the Johns Hopkins University Applied Physics Laboratory. The spacecraft first flew by Mercury on January 14, 2008 and finally entered orbit March 18, 2011, becoming the first probe to visit Mercury since the 1975 flyby by Mariner 10 and the first orbital study of the planet ever.

Before Messenger, there had never been a detailed study of Mercury. Due to the planet’s proximity to the Sun, it has short and difficult viewing windows for ground based telescopes. It is also difficult for a spacecraft to travel to Mercury. The maneuver to match Mercury’s close and fast orbit to the Sun (its orbital speed is 60 percent greater than Earth’s, at 48 km/s) takes more rocket fuel than it does to escape the Solar System.

As a result, Mariner 10’s three flybys were partial observations, mapping only 45 percent of Mercury’s surface and providing only a small amount of high-resolution data that could be used to understand Mercury’s geological history. Moreover, Mariner 10 discovered that Mercury has a magnetic field similar to Earth’s, which was wholly unexpected. As only the third flyby was truly dedicated to studying the planet’s magnetosphere, the data necessary to explore theories for the origin of the field would not be available until Messenger’s arrival. 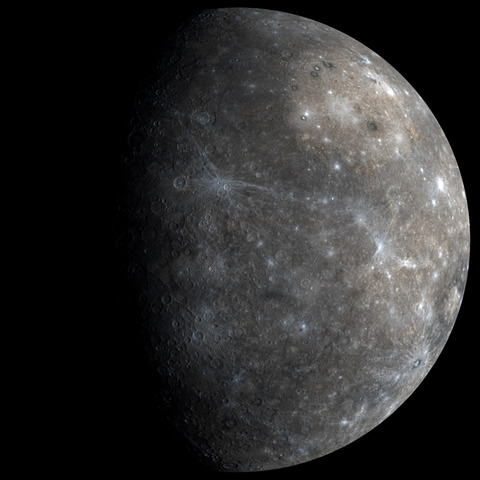 Ground-based telescopes faced different predicaments. Instead of observing in visible light (in which Mercury tends to be lost in the glare of the Sun), astronomers bounced radio signals off Mercury, gathering information about the planet’s surface temperature and rotation rate. The first of these studies was done by Soviet scientists led by Vladimir Kotelnikov in 1962. Subsequent studies were also able to discern physical and chemical characteristics of the surface, including maps done by the Arecibo radar telescope which detected possible water ice at Mercury’s poles.

To answer the questions posed by these earlier observations, Messenger was launched with a suite of seven instruments. These were the Mercury Dual Imaging System (MDIS), the Gamma-Ray and Neutron Spectrometer (GRNS), the X-Ray Spectrometer (XRS), the Magnetometer (MAG), the Mercury Laser Altimeter (MLA), the Mercury Atmospheric and Surface Composition Spectrometer (MASCS), and the Energetic Particle and Plasma Spectrometer (EPPS). Combined, these experiments mapped the whole of Mercury in visible and infrared light, measured the topographical and chemical characteristics of the planet’s surface, studied the changes in Mercury’s magnetic field and observed shifts in the planet’s atmosphere.

By every measure, Messenger achieved its science goals. With a budget of just under $450 million (two days worth of the US war in Afghanistan), it sent back ten terabytes of data, including more than 275,000 high resolution images of the rocky world. Already, 181 articles have been  produced with this data since Messenger entered orbit, involving an international team of more than 125 scientists and engineering labor from Canada, Finland, Germany, Israel, Italy and the United States.

This oblique image highlights the interiors of Abedin Crater. The central peaks in the middle of the depression may have a volcanic origin. Credit: NASA/JHUAPL/CIW

One of the surprising findings is that Mercury has a high abundance of the elements potassium, sulfur and chlorine, along with an unexpectedly low content of thorium. The high sulfur content in particular indicates that Mercury’s formation involved less oxygen than the other terrestrial planets. This rules out certain theories for Mercury’s formation as well as for the formation of all the planets in the inner Solar System.

Another constraint on theories of Mercury’s formation is the presence of ice water at the poles. Previous ground-based radio observations detected highly reflective materials at the poles, but the geometry between Earth and Mercury is such that those observations couldn’t get enough detail to determine the chemical composition of the deposits.

Messenger’s orbit allowed to get a clear view of what had previously been hidden and provided many lines of evidence – including direct observations and measuring the amount of neutrons emitted from Mercury’s surface – to determine that there is in fact water ice present in the shadows of Mercury’s polar craters. 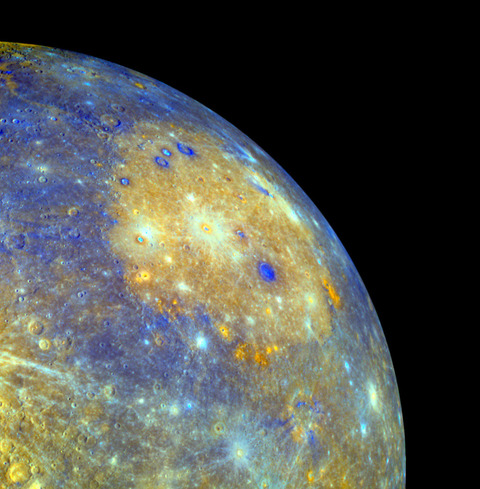 The Caloris impact basin is thought to be the remnant of an asteroid striking Mercury nearly 4 billion years ago. The different colors represent different mineral compositions on Mercury’s surface. Credit: NASA/JHUAPL/CIW

Work was also done studying Mercury’s atmosphere. While thin, it does exist and was shown to vary seasonally. When Mercury is at it’s farthest from the Sun, its sodium-rich atmosphere forms a thin shell near the surface of the planet. When it nears the Sun, however, the sunlight becomes intense enough to strip the atmosphere into a glowing tail that someone standing on Mercury’s nightside would find reminiscent of the faint orange of a sky illuminated by a city’s sodium streetlights. How the atmosphere regenerates itself is still unknown.

One of the features noted about Mercury by Mariner 10 is that the planet appears to have contracted well after it was mostly formed. In a general sense, this can be seen from careful visible and radar imaging of the surface topography. With Messenger’s ability to make highly accurate topographical maps, study Mercury’s volcanic past and it’s ability to trace the planet’s geological history by looking at the layers in various craters, astronomers determined that Mercury’s radius has shrunk by at least 7 kilometers since its formation. This is most likely as a result of a crust forming around Mercury’s molten core that buckled as the core collapsed. Neither Earth, the Moon, Venus or Mars exhibit any evidence of a similar process. 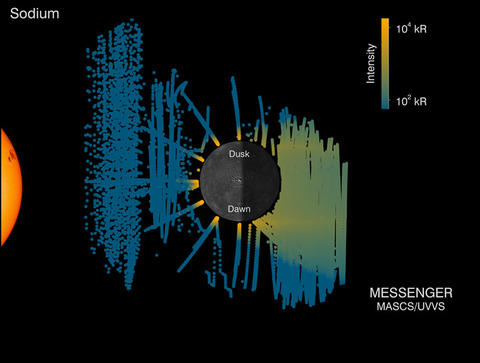 Thousands of images taken by the MASCS instrument over the past four years were stitched together to show the effect of sunlight on Mercury’s largely sodium atmosphere. Credit: NASA/JHUAPL/CIW

A number of things were discovered by Messenger about Mercury’s magnetic field. First, the north and south ends of the field do not align as one would expect (north pointing out of one pole and south out the opposite), but are offset by about 45 degrees. This, combined with the more intense solar magnetic fields, leads to complex interactions between the planet’s magnetic field and the Sun’s that are far more dynamic than those between the Sun and Earth.

The magnetic measurements in particular provide a probe deep into Mercury’s interior: from Messenger’s data, the size, mass, composition and rotation rate of Mercury’s iron core have been determined.

The Messenger mission also provided a number of technical insights for future space missions, both to Mercury and elsewhere. As noted before, simply getting to Mercury turns out to be not so simple. As the mission was a low budget Discovery class mission, it did not have the payload size for the fuel needed to go directly that deep into the Sun’s gravitational influence. Instead, it took a convoluted route first developed by Taiwanese physicist Chen-wan Yen in 1985 that involves six planetary flybys (Earth once, Venus twice then Mercury thrice) and five thruster corrections to match Mercury’s orbit.

Teams working on the craft also had to develop a ceramic cloth sunshade to protect both the scientific and communications instruments from the temperature changes between the harsh radiation of the Sun (nine times at Mercury than what is received at Earth) and the lack thereof when the spacecraft went into the shadow of Mercury. 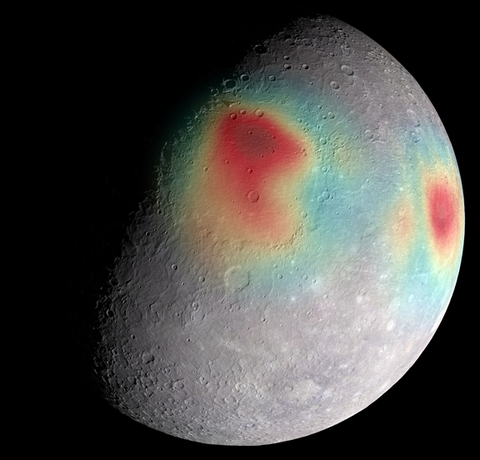 Concentrations of dense material underneath Mercury’s surface have a higher gravity than the rest of the planet, causing slight changes in Messenger’s orbit. This is used to help determine Mercury’s internal structure. Credit: NASA/JHUAPL/CIW

Being so close to the Sun also provided opportunities for the mission. Messenger was primarily powered by high-end solar panels. The soft pressure from the Sun’s radiation was also used during the planetary flybys to make corrections that would have otherwise needed fuel.

Messenger’s most significant technical accomplishment is what has been termed hovering. It was known from the beginning that the Sun’s gravitational influence would alter a spacecraft’s orbit enough to need constant corrections. In the early part of Messenger’s life, this gravitational attraction pulled the spacecraft towards the Sun. In the later part of the spacecraft’s life, however, it drifted towards Mercury’s surface. By using this effect and a clever use of propellant, Messenger was able to carry out measurements at distances from 35 kilometers to as little as five kilometers above Mercury’s surface, making possible unprecedented measurement precision in the last several weeks of the spacecraft’s life. 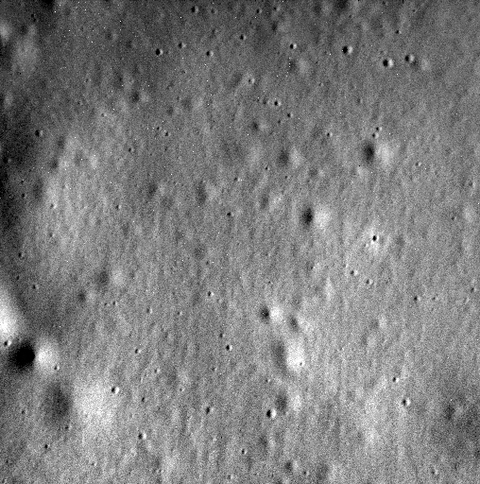 Though Messenger was slated to last only a year, it exceeded expectations and stayed in Mercury’s orbit for over four years. This is the spacecraft’s last image transmitted back to Earth. Credit: NASA/JHUAPL/CIW

Though the loss of Messenger was known about, planned for, and even used for science, it is still tragic. The past four years have uncovered a world which is key to understanding the Solar System and about which many questions, some motivated by Messenger’s study alone, remain. The opportunities for future study will be limited: the European/Japanese probe BepiColombo will launch after years of delay – largely caused by funding starvation – in 2017, with arrival in 2024. This mission, whose originally planned lander component was cancelled by funding cutbacks in 2003, has been under development for 18 years. No further visits to Mercury are at present being planned.