Civilian Killings? West Literally Gets Away with Murder

Jul 16 2015 – The United Nations continues to come under heavy fire for singling out mostly non-Western states for human rights violations while ignoring the misdeeds of Western nations or big powers. 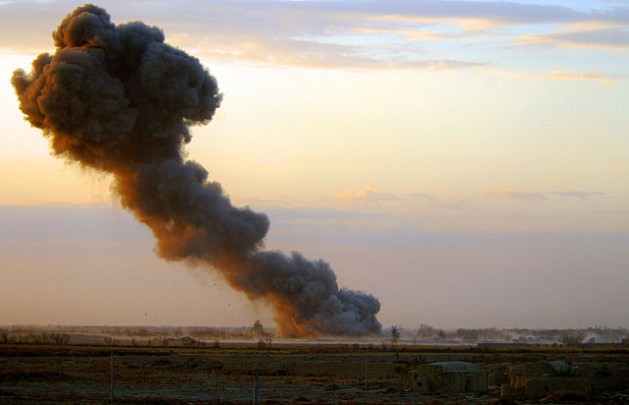 Plumes of smoke rise into the evening Afghan sky as Allied air support brings an end to Operation Glacier 4 in February 2007. Operation Glacier 4 was a deliberate action against Taliban Forces in the district of Garmsir by Royal Marines of 42 Commando in Helmand province, Afghanistan. Credit: Sean Clee/OGL license

As part of its annual ritual, the U.N. Third Committee, which deals with human rights issues, has religiously adopted country-specific resolutions every year, mostly critical of nations like Iran, Syria, Cuba and North Korea for their infractions.

But none of these resolutions have been adopted unanimously – rather, with an increasing number of abstentions.

Still, both the United Nations and its Human Rights Council (HRC) have rarely, if ever, launched an investigation into civilian killings, including of women and children, in Iraq, Afghanistan, Libya and Yemen by drone attacks or aerial bombings by the United States and its Western allies.

“They literally get away with murder,” says one Asian diplomat, complaining about the double standards on human rights violations and war crimes.

Currently, the Geneva-based HRC has Commissions of Inquiry or Fact-Finding Missions related to four countries: Eritrea, North Korea, Syria, Sri Lanka and Gaza (on the civilian killings by Israel in the conflict back in July last year).

But most of these human rights violations, including political repression, torture or war crimes, are within the territorial borders of these countries.

Dr Gerald Horne, Moores Professor of History and African-American Studies at the University of Houston, told IPS even the recent spate of police shootings in the United States, of mostly unarmed African-Americans, merits a thorough investigation by the U.N. Human Rights Council.

“It is true that U.S. allies will object. However, the U.S. itself has established a precedent by its frequent call for investigations of the internal affairs of U.S. member states,” he said.

Yet, he pointed out, “given the importance of the U.S. to the global system of governance, it is important for this nation not to be exempt from that which it demands from others.”

In recent years, according to published reports, there has been a spate of racially motivated killings by the police or by law enforcement officials, including in Staten Island, New York, Ferguson, Missouri, Brooklyn, New York and in Chicago in the U.S. state of Illinois.

Dr Horne said “given that the U.S. is a nuclear power on hair-trigger alert, it is quite disturbing to see an urban insurrection just miles from the White House in Baltimore – after yet another killing of an unarmed African-American man.”

Arguably, it would not be unfair to suggest that this dire situation too represents a grave threat to international peace and security that the U.N. should ignore at its peril.

“I should add parenthetically that historically the U.S. has required external intervention to resolve nagging internal issues; for example, it is now well recognised that British abolitionists played a major role in forcing the collapse of slavery in the U.S. in the 19th century.”

Today’s outrages in the U.S. demand no less, declared Dr Horne, who has authored more than 30 books, including the premier study of civil unrest in Los Angeles in 1960s, along with several publications on the slave trade.

The issue of political double standards has been vociferously highlighted by Sri Lanka: a country accused of civilian killings at the end of its decades long battle against separatists in its northern province in May 2009.

“A handful of countries had been selected for adverse attention by the Council, while others in similar circumstances were ignored,” he added.

Turning to the Council’s resolution related to his country, he said the text had infringed on the fundamental principles of international law, which required that national mechanisms needed to be exhausted before resorting to international measures, and had challenged its sovereignty and independence.

Asked about the rising civilians killings attributed to U.S. drone attacks, Dr Horne told IPS the legally questionable drone warfare of the U.S. authorities is an unfortunate complement to the repetitive slayings of unarmed African-American men and boys (Tamir Rice in Cleveland had yet to reach his teen years before he was slain on videotape).

Surely, it establishes a dangerous precedent when a U.N. member state – the U.S. – is allowed to slay its own citizens and then slay others abroad, while all the while complaining about the internal affairs of sovereign states worldwide, he argued.

He said the ancestors of the U.S. authorities kidnapped Africans from the region stretching from Senegal to Angola, with a particular emphasis on the Congo River basin, then rounding the Cape to seize Africans in Madagascar, Mozambique and Zanzibar.

“This crime against humanity weakened all of these U.S. member states and then, to exacerbate the original crime, the descendants of these captive Africans are now slain like wild boar in the woods.”

Sadly, he noted, the international community has been quiet about this outrage which no doubt convinces the U.S. authorities that if they can slay their “own” citizens with impunity, then certainly they can act similarly abroad with drone warfare.

This matter cries out for “humanitarian intervention” by the international community, he declared, in a challenge to the United Nations.

Addressing the opening session of the HRC last March, the U.N. High Commissioner for Human Rights Zeid Ra’ad Al Hussein criticised member states for ‘cherry-picking’ human rights – advocating some and openly violating others – perhaps to suit their own national or political interests.

Despite ratifying the U.N. charter reaffirming their faith in fundamental human rights, there are some member states who, “with alarming regularity”, are disregarding and violating human rights, “sometimes to a shocking degree,” he said.

“They pick and choose between rights,” he said.