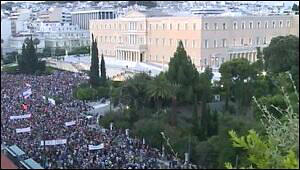 Tens of Thousands Protest in Front of the Greek Parliament against Austerity Plan for Greece, Evening of June 29, 2015

30 Jun 2015 – Are Goldman Sachs executives Lloyd Blankfein, Gary Cohn and Addy Loudiadis losing any sleep over elderly pensioners waiting outside shuttered banks in Greece, desperately trying to obtain their pension checks to pay their rent and buy food? Are these Goldman honchos feeling a small pang of conscience over the humiliation by creditors of this once proud country? Perhaps Blankfein, who famously espoused that he’s “doing God’s work” might shed a tear or two for the small child clinging to her elderly Grandmother’s hand as she searches in Athens for an ATM that will give her $66 from her bank account – the maximum allowed per day under the newly imposed capital controls.

According to investigative reports that appeared in Der Spiegel, The New York Times, BBC, and Bloomberg News from 2010 through 2012, Blankfein, now Goldman Sachs CEO, Cohn, now President and COO, and Loudiadis, a Managing Director, all played a role in structuring complex derivative deals with Greece which accomplished two things: they allowed Greece to hide the true extent of its debt and they ended up almost doubling the amount of debt Greece owed under the dubious derivative deals.

A February 2012 BBC documentary on the Goldman Sachs deal provides a layman’s view of the dirty underbelly of the deal, calling it “a toxic import” from America that is “hastening” the downfall of Greece.

“On the day the 2001 deal was struck, the government owed the bank about 600 million euros ($793 million) more than the 2.8 billion euros it borrowed, said Spyros Papanicolaou, who took over the country’s debt-management agency in 2005. By then, the price of the transaction, a derivative that disguised the loan and that Goldman Sachs persuaded Greece not to test with competitors, had almost doubled to 5.1 billion euros, he said…

“A gain of 600 million euros represents about 12 percent of the $6.35 billion in revenue Goldman Sachs reported for trading and principal investments in 2001, a business segment that includes the bank’s fixed-income, currencies and commodities division, which arranged the trade and posted record sales that year. The unit, then run by Lloyd C. Blankfein, 57, now the New York-based bank’s chairman and chief executive officer, also went on to post record quarterly revenue the following year…

“The revised deal proposed by the bank and executed in 2002, was to base repayments on what was then a new kind of derivative — an inflation swap linked to the euro-area harmonized index of consumer prices…

“That didn’t work out well for Greece either. Bond yields fell, pushing the government’s losses to 5.1 billion euros, according to an analysis commissioned by Papanicolaou. It was ‘a very bad bet,’ he said in an interview.”

The deal was restructured again in 2005 according to the Bloomberg article, this time locking in the 5.1 billion euro debt.

For the unschooled to the ways of Wall Street, one might jump to the conclusion that Greece and its finance officials were knowing participants in the deal. That would be a reasonable assumption were it not for counties and cities and school districts across America that were similarly fleeced and hoodwinked by investment banks on Wall Street.

In March 2010, the Service Employees International Union (SEIU) released a study showing that from 2006 through early 2008, Wall Street banks are estimated to have collected as much as $28 billion in termination fees from state and local governments who were desperate to exit abusive derivative deals. That amount does not include the ongoing outsized interest payments that were, and still are being paid in some cases. Experts believe that billions of these abusive derivative deals may still remain unacknowledged by embarrassed municipalities.

Back in 2010 when German Chancellor Angela Merkel first heard of these derivative deals to hide sovereign debt among European Union partners, she had this to say: “It’s a scandal if it turned out that the same banks that brought us to the brink of the abyss helped to fake the statistics.”

Well, that’s exactly what happened. Wall Street padded its profits with these deals in order to extort massive bonuses for its executives from its shareholders on the basis that it was “doing God’s work,” when in fact it was catastrophically leveraging up the global economy with secret, off-balance-sheet debt deals. Wall Street then crashed the global economy in 2008 to 2009, just as it had from 1929 to 1932. And the people who structured these deals not only still have their jobs but they’ve received promotions and ever higher compensation while the people of Greece struggle to buy medicine and food.

Given this undeniable set of facts, Merkel’s choice of the word “scandal” to describe the unfolding Greek tragedy seems perhaps a bit mild.

Greece: Why Is a Nation of 11 Million Causing Stock Market Losses Around the World Today?

Thanks to Wall Street, America Has Growing Greek-Like Debt Bombs

Wall Street On Parade ® is registered in the U.S. Patent and Trademark Office. WallStreetOnParade.com is a financial news site operated by Russ and Pam Martens to help the investing public better understand systemic corruption on Wall Street. Ms. Martens is a former Wall Street veteran with a background in journalism. Mr. Martens’ career spans four decades in printing and publishing management.