Myanmar [Burma]: How the Rohingya and Other Resident Minorities Became Disenfranchised

17 Jul 2015 – Over the past weeks, the plight of Rohingya refugees has caught the eye of the international media (see, for instance, news reports in the New York Times and Guardian). They are emigrants from Myanmar (Burma) who were adrift for weeks in the seas of South-East Asia after having fled from appalling living conditions in their native Myanmar, only to be firmly rebuffed by neighbouring countries who refused to admit them on their shores. 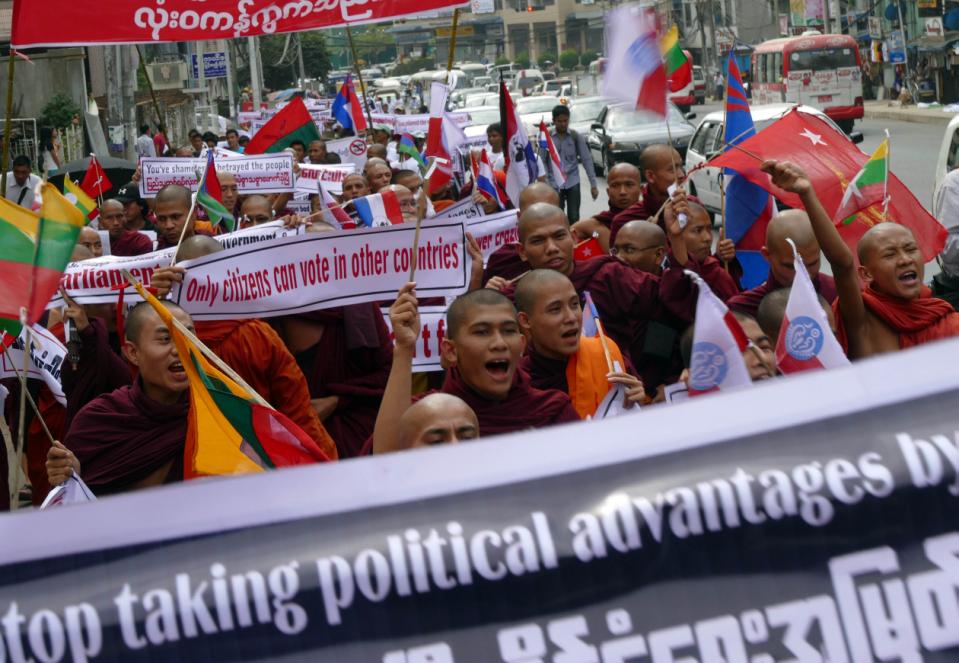 Buddhist monks holding placards shout slogans as they march for a protest Wednesday, Feb. 11, 2015, in Yangon, Myanmar. Hundreds of people have demonstrated in Yangon, Myanmar’s biggest city, to protest a government decision to allow people without full citizenship, including members of the Rohingya ethnic minority, to vote in an upcoming constitutional referendum. Parliament recently decided to allow temporary identity card holders, known as white card holders, the right to vote in a referendum for constitutional amendments. (AP Photo/Khin Maung Win)

The Rohingya are a Muslim minority in predominantly Theravada-Buddhist Myanmar, who are treated as illegal migrants even though they have lived in Myanmar for generations. They are called “Bengalis” by authorities, as their own self-definition, Rohingya, is not recognised officially as either a minority group or “race”, of which there is otherwise a clear number defined by the regime. Needless to say, the nationality law of Myanmar does not allow for their inclusion in the polity, and there seems to be no desire to change this. In 2013 the United Nations Special Rapporteur on the human rights situation in Myanmar recommended an amendment of the Citizenship Act, but the ultimate response of the government was that “we see no reason whatsoever to review or amend this Act.”(1) Yet, an amendment of the current Myanmar Citizenship Law could improve the status of the Rohingya, who currently reside in the Rakhine (Arakan) state without citizenship.

Violence erupted in the Rakhine state in June 2012: around 100 died and 80,000 people were displaced. In October the same year, a second wave of riots elevated the number of displaced people to 140,000. Many Rohingyas are stateless and thus are restricted in several basic aspects of life, from their right to move within the country to the right to work, with many living in camps, in extremely precarious conditions. Prejudice and discrimination against the Rohingya are so widespread that not even local human rights defenders can be trusted to raise the issue of their exclusion.

Until recently the Rohingyas – as other stateless minority populations, such as the Burma-born ethnic Chinese and Indian – at least had ID cards (“white cards”) that allowed them to vote in two occasions. Allegedly, the ruling party, Union Solidarity and Development Party, chaired by the current President Thein Sein, coerced or bought Rohingya votes to secure a majority in parliament in the 2010 elections. Other reports have suggested that the Rohingyas were successively given and deprived of their ID cards at their own will. In these circumstances, the fact that few support the extension of voting rights to the Rohingyas and other noncitizen minorities in Myanmar comes as no surprise. The President’s position has been particularly ambivalent, as he personally advocated their enfranchisement for a referendum on a constitutional amendment, only to declare the white cards invalid when protests erupted in several parts of the country to prevent their participation in any kind of upcoming election. Alarmingly, the protesters were not rallying behind opposition parties to demand clean, transparent elections, but rather behind Buddhist monks with nationalistic and openly racist slogans demanding their expulsion from Myanmar. By now, the Rohingyas have been disenfranchised by the Burmese Parliament, President, and Constitutional Court, successively.

The disenfranchisement of the Rohingya and other ethnic minorities has proceeded in three steps. First, the white cards were declared invalid after March 31. Subsequently, white card holders were deleted from the electoral registries and finally, the white cards were confiscated. This means that the Rohingya, already a stateless group, have been deprived of their only identification documents. In Myanmar, the absence of an identity card precludes access to health, restricts freedom of movement within the country, as well as access to school, university and jobs. Allegedly, several thousand white card holders were given a receipt in order to be issued a “green card” later, if they are found to be legal residents, or to be eligible for naturalisation. However, the latter option is unlikely, given how restrictive the nationality law is and how difficult providing the required documents will eventually be: Applicants would have to provide proof that their family has resided in Myanmar for over three generations if they want to obtain Myanmar citizenship and have an identity card. In a way, the disenfranchisement of the Rohingya began 25 years ago: in 1990 all identity cards were changed in Myanmar in order to include mention of ethnicity and religion. Ever since, the Rohingya minority has been denied the use of the term to identify themselves. Still, they have never been more vulnerable than today, as they are deprived of their most basic rights, including the right to an identification document and to reside in Myanmar.

Luicy Pedroza is a Post-doctoral Fellow at the Freie Universität Berlin and is currently working on a comparative project on citizenship regimes in Latin America. She holds a PhD from the Bremen International Graduate School of Social Sciences. Her dissertation compared processes of enfranchisement of non-citizens across democracies, focusing on the Portuguese and German cases. Dr. Pedroza is also a Visiting Professor at the Central European University, and teaches courses on Comparative Politics and Migration Policy and Politics. Contact: lpedroza@zedat.fu-berlin.de