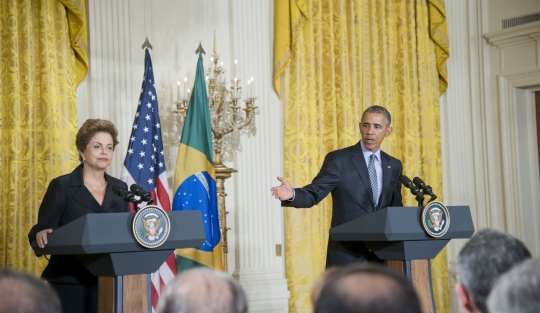 4 Jul 2015 – Top secret data from the National Security Agency, shared with The Intercept by WikiLeaks, reveals that the U.S. spy agency targeted the cellphones and other communications devices of more than a dozen top Brazilian political and financial officials, including the country’s president Dilma Rousseff, whose presidential plane’s telephone was on the list. President Rousseff just yesterday returned to Brazil after a trip to the U.S. that included a meeting with President Obama, a visit she had delayed for almost two years in anger over prior revelations of NSA spying on Brazil.

That Rousseff’s personal cell phone was successfully targeted by NSA spying was previously reported in 2013 by Fantastico, a program on the Brazilian television network Globo Rede. That revelation – along with others exposing NSA mass surveillance on hundreds of millions of Brazilians, and the targeting of the country’s state-owned oil company Petrobras and its Ministry of Mines and Energy – caused a major rupture in relations between the two nations. But Rouseff is now suffering from severe domestic weakness as a result of various scandals and a weak economy, and apparently could no longer resist the perceived benefits of a high-profile state visit to Washington.

But these new revelations extend far beyond the prior ones and are likely to reinvigorate tensions. Beyond Rousseff, the new NSA target list includes some of Brazil’s most important political and financial figures, such as the Finance Ministry’s Executive Secretary Nelson Barbosa; Luiz Awazu Pereira da Silva, a top official with Brazil’s Central Bank; Luiz Eduardo Melin de Carvalho e Silva, former Chief of Staff to the Finance Minister; the Foreign Affairs Ministry’s chief of economics and finance, Luis Antônio Balduíno Carneiro; former Foreign Affairs Minister and Ambassador to the U.S. Luiz Alberto Figueiredo Machado; and Antonio Palocci, who formerly served as both Dilma’s Chief of Staff and Finance Minister under former president Luiz Inácio Lula da Silva.

Most notable about the list, published simultaneously by WikiLeaks, is the predominance of officials responsible for Brazil’s financial and economic matters (last four digits of the listed telephone numbers are redacted; click to enlarge): 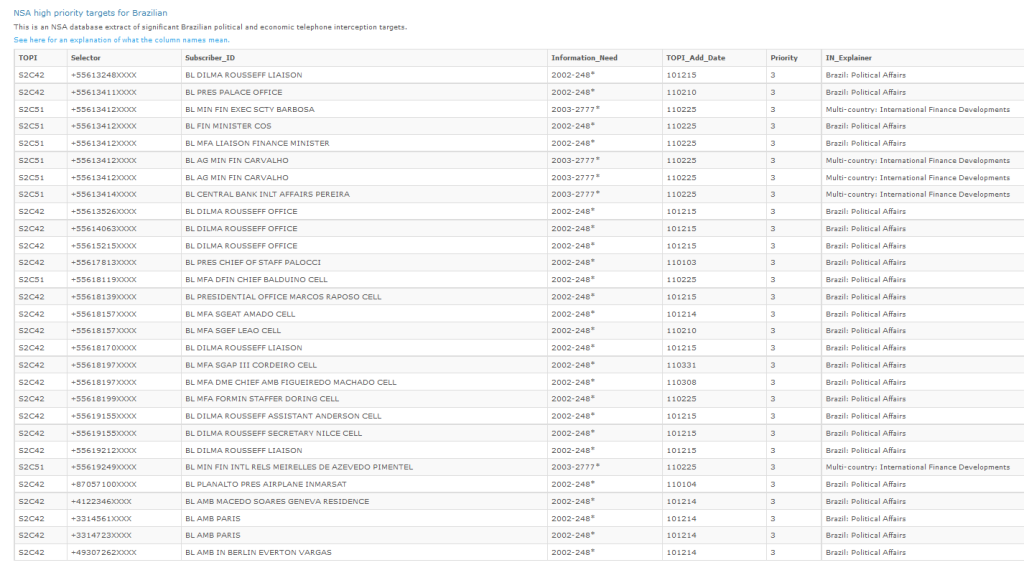 Next to each name on the list, there are codes which indicate the purpose of the surveillance and the group of analysts within NSA responsible for it. The codes appear under under the column entitled “TOPI,” which stands for “Target Office of Primary Interest.”

Alongside most of the government officials’ phone numbers is the designator “S2C42,” a reference to an NSA unit that focuses on intelligence collected from Brazil’s political leadership. The same code was seen in the previously reported document revealing NSA’s targeting of Dilma’s cellphone: 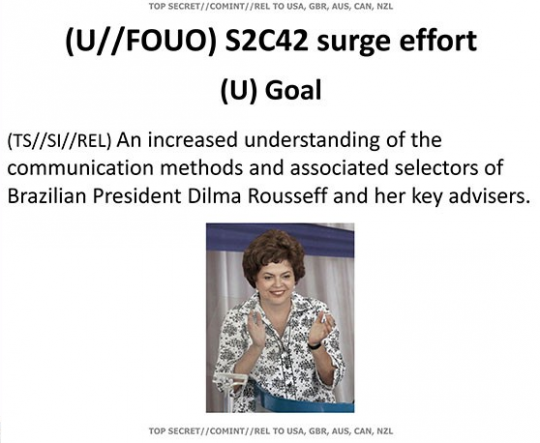 But even more revealing on this new list is the designation next to several of the targeted officials responsible for financial and economic issues. Many of these individuals have a different code next to their phone number – S2C51 – which refers to NSA’s “international financial policy branch.” Brazilians are particularly sensitive to economic espionage by the U.S., both for historical reasons (as a hallmark of American imperialism and domination on the continent) and due to current economic concerns (for that reason, the story of NSA’s targeting of Petrobras was arguably the most consequential of all prior surveillance stories).

Several Brazilian officials expressed anger over the latest revelations. Gilberto Carvalho, former Chief of Staff to Lula and a top aide to Dilma, harshly denounced the spying in an interview with the Intercept. He described his reaction as “maximum indignation,” declaring it a “violation of Brazilian sovereignty” which the U.S. “does not have the right to do.” Carvalho added that the fact that Brazil “is trying to repair our relationship with the U.S. does not in any way diminish the gravity of these new revelations.”

For his part, the Central Bank’s Pereira da Silva said his reaction is to fully embrace the stinging denunciation of NSA’s electronic surveillance contained in Dilma’s September, 2013 United Nations speech, delivered while Obama waited in the hallway to speak. That blistering speech was widely regarded in Brazil as a high point of Dilma’s leadership on the world stage.

Speaking from the General Assembly podium, she declared that “tampering in such a manner in the affairs of other countries is a breach of international law and is an affront of the principles that must guide the relations among them, especially among friendly nations.” She condemned U.S. mass surveillance as a “grave violation of human rights and of civil liberties” and, in a rare invocation of her own personal history as a rebel against the country’s oppressive military dictatorship, said: “As many other Latin Americans, I fought against authoritarianism and censorship, and I cannot but defend, in an uncompromising fashion, the right to privacy of individuals and the sovereignty of my country. In the absence of the right to privacy, there can be no true freedom of expression and opinion, and therefore no effective democracy.”

Other Brazilian targets on the newly released NSA list include the long-time diplomat and author André Amado, as well as a current official with the Foreign Affairs Ministry, Fernando Meirelles de Azevedo Pimentel. It also includes the “cell” numbers for several of the key targets along with their office numbers. And it lists the Brazilian ambassadors in Paris, Berlin and Geneva, with the official “residence” of the latter targeted.

Questions submitted to NSA were not answered by the time of publication. Prior to the disclosure about its spying on Petrobras, the NSA insisted to the Washington Post that (emphasis in original) “the department does ***not*** engage in economic espionage in any domain, including cyber.” In response to the Petrobras report, however, Director of National Intelligence James Clapper said that “it is not a secret that the Intelligence Community collects information about economic and financial matters” but claimed that it does not “use our foreign intelligence capabilities to steal the trade secrets of foreign companies on behalf of – or give intelligence we collect to – US companies.”

The list obtained by The Intercept from WikiLeaks is extracted from an NSA database. Dates that appear on it indicate that the eavesdropping on several of the officials began in early 2011, but others were first targeted in 2010 while Lula, Rousseff’s predecessor, was still President. There is no indication that the surveillance has stopped. Rather than a one-time document created on a single day, the list appears to be an aggregate list of targets continually compiled and updated by the NSA. Last week, WikiLeaks released similar documents showing surveillance of French and German political and financial officials, and that spying took place over many years.