16 Jul 2015 – The flyby of Pluto by the spacecraft New Horizons is a scientific and technological achievement of the first order. Reaching the most distant object in the solar system ever visited from Earth, the spacecraft traveled more than three billion miles, using a gravitational boost from Jupiter to cut three years off the travel time. 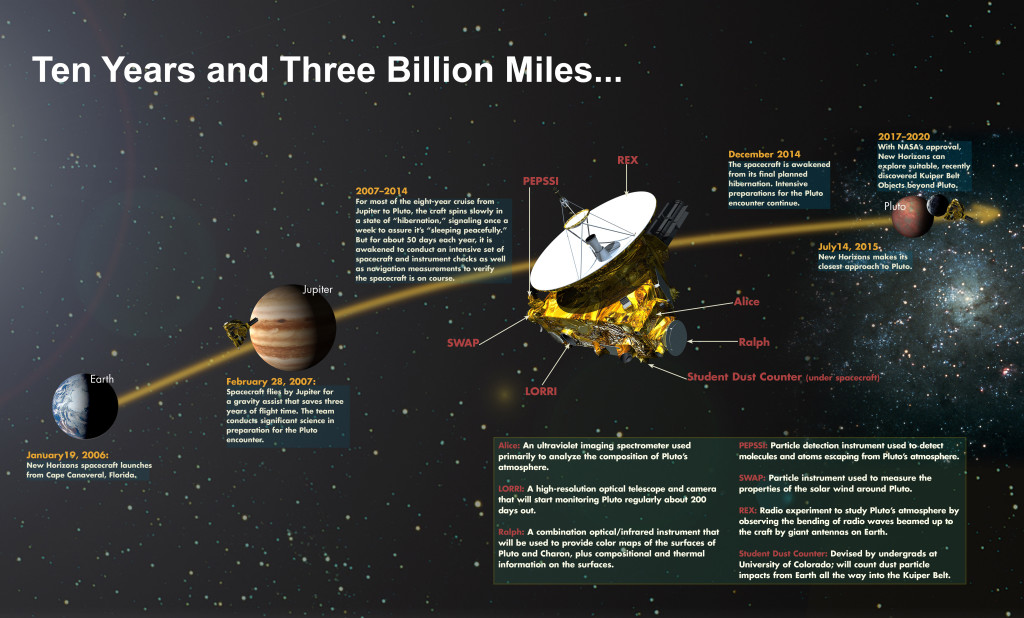 The New Horizons spacecraft is comparatively tiny, about the size of a grand piano. Given the vast distance from the Sun, the spacecraft could not be powered by solar panels; instead, it relied on 24 pounds of plutonium dioxide, which generates only 200 watts of power to operate the spacecraft and its seven instruments, with 12 watts set aside for transmitting data back to Earth.

The extreme distance and the small size of the dwarf planet added enormously to the difficulty and complexity of the mission. Pluto’s gravity is too weak to capture a spacecraft moving at the speed New Horizons had to achieve to make the journey in “only” nine and a half years.

The result was a flyby at 30,800 miles per hour, so rapid that New Horizons was at its low point above Pluto for only a few minutes. In order to maximize time for collecting data, the spacecraft went “dark” for 22 hours, suspending communications with NASA ground controllers while its instruments scanned Pluto and its five moons.

When the spacecraft resumed contact with the Earth at 8:52pm Eastern Time Tuesday night, there were cheers not only at the Applied Physics Laboratory in Laurel, Maryland, but around the world, where millions of people were watching on television or over the Internet.

The popular enthusiasm for the Pluto mission—hundreds of thousands “liked” the first color photo of Pluto posted by NASA on Instagram, where the space agency has 3.6 million followers—is an expression of deeper public sentiments: a desire to learn, to explore, to see tangible progress in the development of science and human civilization.

Once thought to be the last and least planet, Pluto is now understood as the largest object in the Kuiper Belt, a vast region of thousands of smaller ice and rock worlds that surrounds the Sun and its eight planets. Study of Pluto and similar objects will provide another dimension in the understanding of the earliest days of the formation of the solar system.

In barely half a century since the first space satellites were launched, manmade vehicles have now visited every planet in the solar system. This year alone, space probes have studied Mercury, Mars, the asteroids, a comet and now Pluto.

These significant scientific achievements stand in sharp contrast to the seemingly intractable social, economic and political crises on our own planet. Many people will ask, justifiably: How is it that our society can reach and photograph the most distant object in our solar system, and yet cannot deliver adequate food, clothing, shelter and decent medical care to human beings here on Earth?

There is a straightforward answer: the mission to Pluto was not based on market principles. There were no stockholders. No one made a profit cutting corners on the radio transmitter, or the propulsion system, or the instruments for scanning Pluto’s moons or analyzing its surface. No one placed a speculative bet on the failure of the mission, like the Wall Street criminals who crashed the financial markets in 2008.

The mission to Pluto demonstrates the power of science, but capitalism—above all, in the United States—systematically attacks public education, degrades popular understanding through the media, and promotes every form of religious backwardness. Modern technology can produce astonishing advances like New Horizons, but in the grip of Corporate America it is perverted to the service of the financial aristocracy and global militarism.

Much more is possible. The entire New Horizons mission cost $700 million—less than the cost of a single stealth bomber, and less than what a typical hedge fund boss pockets in a single year. Even in the space budget itself, the US government spends far more for military-related activities, from spy satellites to research on methods of space warfare, than the funding of all genuine scientific efforts combined.

The New Horizons mission mobilized hundreds of scientists and technicians who dedicated the last ten years of their lives, in some cases much more, to the planning, preparation and execution of the visit to Pluto. Compare this to the hundreds of thousands, some equally talented and highly educated, who are recruited to the service of hedge funds, investment banks, spy agencies like the NSA, and the military.

After the successful flyby, there were attempts by spokesmen for American imperialism, from President Obama on down, to claim a nationalistic dividend, hyping supposed “American genius.” NASA spokesman David Weaver boasted, “With this mission we will have visited every planet and dwarf planet in our solar system, a remarkable accomplishment that no other nation can match.”

Such chauvinism is both disgusting and delusional. Science is an international collective effort. The successes of the “American” space program depend on generations of scientific work, on every continent. Moreover, despite the tub-thumping, the US space program manifests the underlying crisis and decline of American capitalism.

Before New Horizons, a half dozen other Pluto missions were scrapped because they offered no obvious military-technical payoff. New Horizons itself was underfunded, and even now, NASA cannot guarantee the resources needed for secondary missions in the Kuiper Belt, after Pluto, although no other spacecraft will have that opportunity for many years, if not decades. Meanwhile, the manned space program is at a standstill, dependent on Russian launch vehicles even to maintain the International Space Station.

The immense capacity for scientific achievement and technological progress is continually perverted by imperialist slaughter, the conflict between nation-states and the subordination of human activity to the profit principle. How much more can and will be achieved, both in space and on Earth, when war and inequality are abolished, along with the capitalist system!