Tutu: The Slow Genocide against the Rohingya in Myanmar (Burma)

The credit that is due to the government of Myanmar for reforms undertaken over the past couple of years does not blind us to the ongoing disavowal and repression of its ethnic minorities, the Rohingya population in particular. 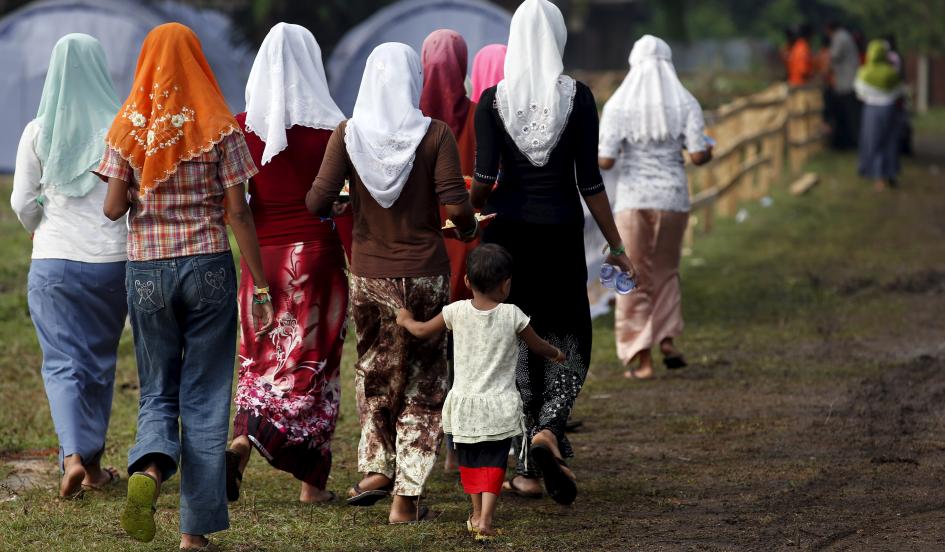 Rohingya migrants who arrived in Indonesia last week by boat walk back after collecting breakfast at a temporary shelter near Langsa on Wednesday. Darren Whiteside/Reuters

A country that is not at peace with itself, that fails to acknowledge and protect the dignity and worth of all its people, is not a free country. Freedom is indivisible. All must be invited. All, a part.

The Rohingya people were not consulted when the British drew the Burmese border on the map. With those strokes of a pen, they became a borderland people; people whose ancestral land traverses political boundaries.

Burma’s post-colonial government, elected in 1948, officially recognized the Rohingya as an indigenous community, as did its first military government that ruled from 1962 to 1974.

Manipulation by the military of ethnic minorities in the west of the country dates back to the late 1950s. At first, the military sought to co-opt the Muslim Rohingya to quell the Buddhist Rakhine after Rakhine separatists had been crushed. The military turned only Rohingya.

In 1978, the Far Eastern Economic Review described the Rohingya as the victims of Burmese apartheid. A few years later, a citizenship law left the Rohingya off the list of indigenous people, describing them as Muslim immigrants from neighboring Bangladesh.

In the context of rising anti-Muslim sentiment in Myanmar, many Buddhists, particularly in Rakhine state, regard the Rohingya as illegal immigrants. More than 100,000 Rohingya are trapped in internment camps. They may not leave “for their own protection.” They hold only temporary identity cards. In February, they lost all voting rights.

The government of Myanmar has sought to absolve itself of responsibility for the conflict between the Rakhine and the Rohingya, projecting it as sectarian or communal violence.

I would be more inclined to heed the warnings of eminent scholars and researchers including Amartya Sen, the Nobel laureate in economics, who say this is a deliberately false narrative to camouflage the slow genocide being committed against the Rohingya people. There’s evidence, they say, that anti-Rohingya sentiment has been carefully cultivated by the government itself.

Human beings may look and behave differently to one another, but ultimately none of us can claim any kind of supremacy. We are all the same. There are no natural differences between Buddhists and Muslims. It is possible to transplant a Christian heart into a Hindu chest and for a citizen of Israel to donate a kidney to a Palestinian.

We’re born to love—without prejudice, without distrust. Members of one family, the human family—made for each other and for goodness. All of us!

We are taught to discriminate, to dislike and to hate.

As lovers of peace and believers in the right of all members of the family to dignity and security, we have particular responsibilities to the Rohingya. 2015 is a big year for Myanmar, with both a referendum on its constitution and a general election on its calendar.

Even as we seek to encourage the country to build on the reforms it has started, we have a responsibility to ensure that the plight of the Rohingya is not lost. We have a responsibility to hold to account those of our governments and corporations that seek to profit from new relationships with Myanmar to ensure their relationships are established on a sound ethical basis.

We have a responsibility to persuade our international and regional aid and grant making institutions, including the European Union, to adopt a common position making funding the development of Myanmar conditional on the restoration of citizenship, nationality and basic human rights to the Rohingya.

Desmond Mpilo Tutu is a South African activist and retired Anglican archbishop who rose to worldwide fame during the 1980s as an opponent of apartheid. Tutu has been active in the defense of human rights and uses his high profile to campaign for the oppressed. He has campaigned for the rights of Palestinians, to fight AIDS, tuberculosis, poverty, racism, sexism, homophobia, and transphobia. Tutu received the Nobel Peace Prize in 1984; the Albert Schweitzer Prize for Humanitarianism in 1986; the Pacem in Terris Award in 1987; the Sydney Peace Prize in 1999; the Gandhi Peace Prize in 2005; and the Presidential Medal of Freedom in 2009. He has also compiled several books of his speeches and talks.