Varoufakis: Troika Forced Syriza [and Greece] into Choice between ‘Suicide or Execution’

21 Jul 2015 – Former finance minister blasts EU, saying: “No one government should ever be treated that way in the context of a club of democratic nations.” 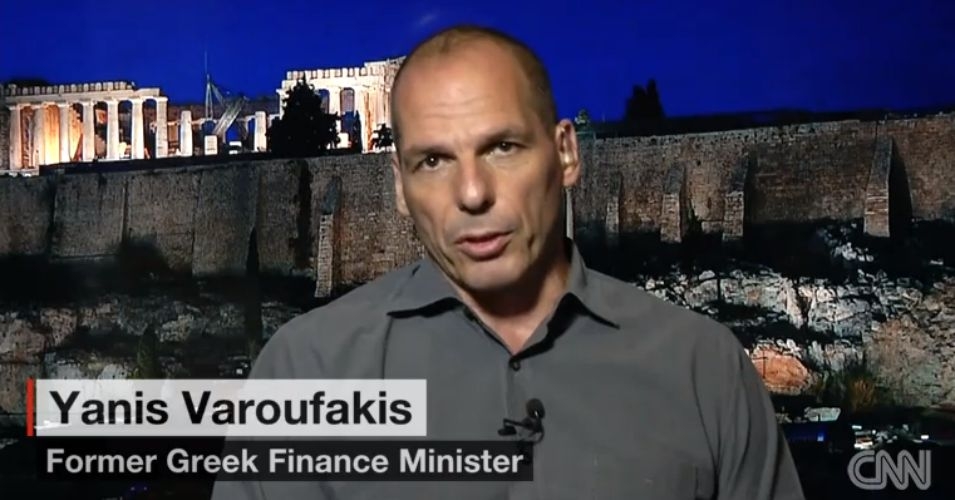 Varoufakis admitted that during negotiations his government did make some mistakes, but mostly in assuming that they were holding “a rational bargaining session.” (Screenshot: CNN)

In his first international television interview since stepping down from his post as Greek Finance Minister, Yanis Varoufakis told CNN‘s Christiane Amanpour on Monday [20 Jul 2015] that European lenders had forced his government to make a choice between “suicide or execution.”

After five months of rigorous negotiations, the outspoken Varoufakis stepped down from his post the night of the Greek referendum. And despite voting against the latest austerity package, Varoufakis said he understood why Prime Minister Alexis Tsipras decided to accept the punishing new terms.

“The truth of the matter is, the very powerful Troika of creditors were not interested in coming to a sensible, honorable mutually beneficial agreement,” Varoufakis said, referring to group that represents foreign creditors, the International Monetary Fund (IMF), the European Commission (eurogroup), and the European Central Bank (ECB).

Varoufakis admitted that during negotiations his government did make some mistakes, but mostly in assuming that they were holding “a rational bargaining session.”

“If you look at the way they have behaved from the very first day [the Syriza government] assumed power,” he continued, “close inspection will reveal… [that] they were far more interested in humiliating this government and overthrowing it—or at least making sure it overthrows itself in terms of its policies—than coming to an agreement that would ensure they would get most of their money back.”

And echoing the recent criticisms leveled at the eurozone “bullies,” he added: “No one government should ever be treated that way in the context of a club of democratic nations.”

Varoufakis conceded that Tsipras “was faced with an incredibly hard choice when he went to the eurogroup summit: commit suicide or be executed, effectively.”

“Alexis Tsipras decided it would be best for the Greek people, for this government, to stay put and to implement a program that this very same government disagrees with,” he said. “People like me thought it would be more honorable, and in the long term more appropriate, for us to resign.”

“But,” he added, “I recognize his argument is equally powerful as mine.”

Ahead of the interview, Varoufakis published a column on Monday assailing what he called Europe’s “vindictive” privatization plan. He also laid out the “Plan B” he had devised for solving the Greek debt crisis, which essentially bundled the country’s public assets into a central holding company, which would be controlled exclusively by the Greek state and used to stimulate the economy.

A portion of the interview is included below: