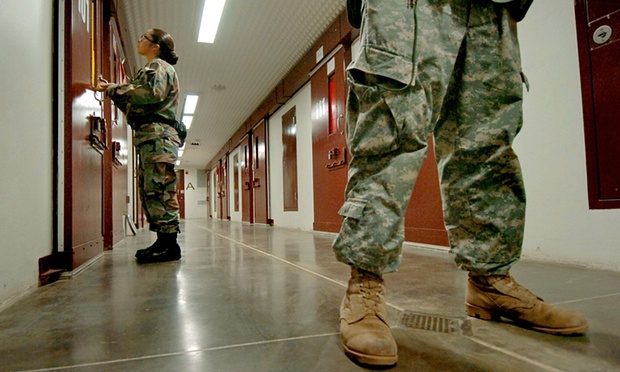 2 Aug 2015 – Opposition is building to intended anti-torture reforms within the largest professional organization of psychologists in the US, which faces a crossroads over what a recent report described as its past support for brutal military and CIA interrogations.

Before the American Psychological Association (APA) meets in Toronto next Thursday [6 Aug] for what all expect will be a fraught convention that reckons with an independent review that last month found the APA complicit in torture, former military voices within the profession are urging the organization not to participate in what they describe as a witch hunt.

Reformers consider the pushback to represent entrenched opposition to cleaving the APA from a decade’s worth of professional cooperation with controversial detentions and interrogations. The APA listserv has become a key debating forum, with tempers rising on both sides.

A recent letter from the president of the APA’s military-focused wing warns that proposed ethics changes, likely to be discussed in Toronto, represent pandering to a “politically motivated, anti-government and anti-military stance”. A retired army colonel called David Hoffman, a former federal prosecutor whose scathing inquiry described APA “collusion” with US torture, an “executioner”.

Tom Williams, who helms the APA’s Division 19, called the Society for Military Psychology, wrote this week to APA officials that he was “deeply saddened and very concerned by what too often appears a politically motivated, anti-government and anti-military stance that does not advance the mission of APA as much as it seems to appease the most vocal critics of APA and Division 19”.

A retired army veteran currently on the US Army War College faculty, Williams blasted “misrepresentations of the PENS [Presidential Task Force on Psychological Ethics and National Security] report that serve an effort to advance an unspoken political agenda”, referring to a critical 2005 APA task force that Hoffman found was stacked with psychologists tied to the Department of Defense.

Reiterating a position the APA took for 10 years before abandoning it after the Hoffman report, Williams said the PENS report “helped ensure torture would not occur”. Larry James, a PENS task-force member who also served as an army colonel and Guantánamo psychologist, wrote separately to colleagues that Hoffman’s findings of collusion to aid torture was an “intentional lie” and a “clear defamatory insult to our military”.

Rather than internal Pentagon reforms, it was congressional intervention, led by torture survivor John McCain and GOP presidential candidate Lindsey Graham, that reigned in US military interrogation. Both McCain and Graham are veterans. Their bill, the Detainee Treatment Act, was a response to Abu Ghraib and passed five months after the PENS report.

Once Williams posted his letter to the APA listserv, Jean Maria Arrigo, a member of the 2005 PENS taskforce, shot back: “To uphold the dignity of Division 19 operational psychologists following the Hoffman report, the burden falls upon Division 19 to censure the task force operational psychologists as APA committee members … I am speaking to you as a person with a vested interest in military honor, not as a detractor of military service.”

Another letter, from a retired army colonel and psychologist, said “executioner Hoffman” received “carte blanche [from the APA] to malign and to conduct a search and destroy mission”.

The former officer, Kathy Platoni, wrote in a dear-colleague letter that a wave of firings and resignations that have swept through the APA after the Hoffman report were unfounded.

“That the APA board of directors allowed this and now have martyred and fallen all over themselves to apologize for crimes against humanity among their own that never occurred and for which not a lick of evidence exists, is bizarre and preposterous. And now we have mass resignations among the APA elite senior leaders … and for what purpose? What do they and APA have to hide?”

After investigating claims that have dogged the APA for years, Hoffman concluded last month that APA officials, including the group’s ethics chief, colluded with the US military and to a lesser extent the CIA to soften its internal prohibitions on torture while insisting publicly that they had done no such thing. Hoffman concluded that for several responsible APA leaders, influence and the prospect of lucrative military contracts provided sufficient motivation.

Nadine Kaslow, one of the chairs of the APA committee liaising with Hoffman, told the Guardian earlier this month she supported ending psychologist support to US military and CIA interrogation and detention operations. Kaslow, a former APA president, was one of the recipients of Williams’ letter.

In a joint response to the Guardian, Kaslow and co-recipient Susan McDaniels, the APA’s president-elect, said that they took Williams’ concerns seriously. But they also signaled a new, post-Hoffman direction for the APA.

“We will review them with the council of representatives as they meet next week to consider the action steps already recommended by the board of directors and a variety of constituency groups, and put forth recommendations of their own,” they said.

“We understand and appreciate the need for a balanced approach that embraces many voices – including those of military psychologists – as the association develops new policies, processes and oversight mechanisms so that ethics and humans rights are clearly at the center of all our decision-making and the problems identified in the Hoffman report cannot recur in the future.”

Longtime critics of torture within the APA consider themselves to have momentum after the Hoffman report, but they also see structural impediments to their project of cleaving psychology from detentions and interrogations. The Pentagon has said it has no plans to recall psychologists from Guantánamo Bay, where they assess the mental health and behavior of detainees subject to forced feedings that detainees and even a Guantánamo nurse have called torture.

“It is unfortunate that a small faction of military psychology leadership is peddling the same discredited falsehoods that APA leaders peddled for the last decade, that APA’s actions were designed to protect human rights,” said Stephen Soldz of the Coalition for an Ethical Psychology.

“Since the Hoffman report deconstructed those claims, this faction is seeking to discredit that report and those who requested it. But these tactics won’t work this time.”

Williams did not return an email seeking comment. Platoni, who said she would not be able to attend the Toronto conference, said she hoped for a “middle ground” that involved civilian colleagues better understanding military responsibilities.

“When you’re in the military, if you’re ordered to fill a position in which detainee operations are involved, you have no say in the matter. You have to perform the duties for which you were trained,” said Platoni, a veteran of both US ground wars in Iraq, Afghanistan and Guantánamo Bay, where she did not interact with detainees.

“After 34 years in the military, I can tell you that almost every psychologist that I served with, whatever their role, was among the most valiant, highly regarded, ethical performers of the duties to which they were assigned.”