Exposing Abuse on the Factory Farm

8 Aug 2015 – While most Americans enjoy eating meat, it is hard to stomach the often sadistic treatment of factory-farmed cows, pigs and chickens.

Farm operators know this, and they go to great lengths to hide these gruesome images from the public. A popular tactic pushed lately by the agriculture lobby is the so-called ag-gag law, which makes it a crime to secretly videotape industrial feedlots and slaughterhouses for the purpose of exposing animal mistreatment and abuse.

These laws, on the books in seven states, purport to be about the protection of private property, but they are nothing more than government-sanctioned censorship of a matter of public interest.

On Aug. 3, a federal judge struck down Idaho’s ag-gag law for violating the First Amendment — the first time a court has ruled on such a statute.

Idaho lawmakers passed the bill last year in response to the release of undercover videos taken by Mercy for Animals, an animal-welfare group, at local factory farms. According to the judge’s decision, one showed farm workers “using a moving tractor to drag a cow on the floor by a chain attached to her neck and workers repeatedly beating, kicking and jumping on cows.” 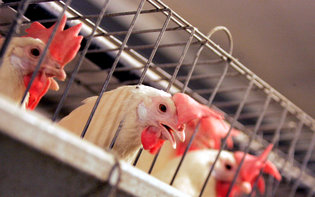 The law’s sponsor complained that the videos exposed the industry to “the court of public opinion,” as though that were a bad thing in a free-market society.

Under the law, a violator, whether a journalist or farm employee, faces up to a year in jail and fines of double the “economic loss” a farm suffers as a result of its abusive practices being made public.

But “food production is not a private matter,” Federal District Judge B. Lynn Winmill wrote in striking down the law. The activists’ undercover methods, he reasoned, “actually advance core First Amendment values by exposing misconduct to the public eye and facilitating dialogue on issues of considerable public interest.”

The judge pointed to the value of undercover investigations on programs like “60 Minutes,” and to one of the earliest and most famous examples of this sort of exposé: “The Jungle,” by Upton Sinclair, who lied to get a job at a Chicago meatpacking plant. The horrors he documented led to major federal food-safety legislation. Under Idaho’s law, Judge Winmill wrote, “Upton Sinclair’s conduct would expose him to criminal prosecution.” As for the state’s interest in protecting private property and business, the judge pointed to existing laws against trespass, fraud and defamation, which do not trample free speech.

In a country that lavishes love and legal protections on house pets, factory-farmed animals are left out in the cold, exempt from almost all animal-cruelty laws. As a result they suffer torture and other mistreatment to a degree that is hard to imagine. The only way to make it stop is to ensure that Americans can see for themselves what goes on behind the factory doors.

A version of this editorial appears in print on August 9, 2015, on page SR8 of the New York edition with the headline: Exposing Abuse on the Factory Farm.