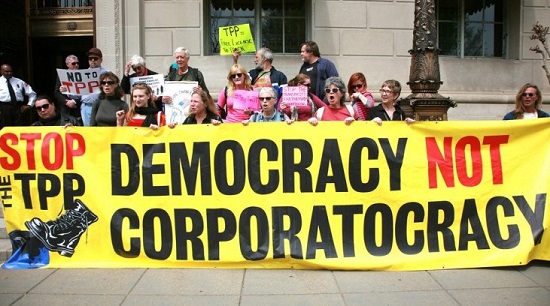 Free trade is one of the principal mantras of capitalism as an historical system. Free trade is preached as the optimal arrangement for expanding production, lowering costs of production and therefore prices for consumption, and increasing income equality over the long run. This all may be true. We shall never know since we have never ever known a world of free trade. Protectionism has always been the dominant mode of economic relations between states.

But, you may think, are not states constantly ratifying treaties that are termed free-trade treaties? Yes, they are. But such treaties are not really based on free trade but rather on protectionism. Let us start with the first basic fact. There is no such thing as free trade that does not include every state in the world-system.

If a treaty includes any number of states running from two states to n-1 states (n being the totality of states at any given time), this means by definition that some other states are excluded from the provisions of that treaty. The collectivity of states within this so-called free-trade treaty are in fact creating a protectionist zone against the excluded state or states.

One of the reasons why it always seems so difficult for states to agree upon a so-called free-trade treaty is that the states involved have to negotiate a trade-off. Each of these states is deciding which protectionist measures it is ready to sacrifice vis-à-vis the limited group of states to be included in the treaty in order to obtain the advantages it would obtain from the readiness of some other state or states to sacrifice some particular protectionist measure.

We can see this how this works by looking at a major negotiation that has been going on for some time under the heading of the Trans-Pacific Partnership (TPP). There are currently twelve states involved in the prospective treaty: Australia, Brunei, Canada, Chile, Japan, Malaysia, Mexico, New Zealand, Peru, Singapore, United States, and Vietnam. This group of 12 began negotiations in 2008 and they set a date of 2012 for completion. The year 2012 is behind us. They now are claiming in 2015 that the current negotiations will be a final phase and presumably completed this year.

If one looks at the list of states involved, it is a curious hodgepodge geographically. In addition, the countries are quite different in size, in GDP, and in importance in the world-economy. There is said to be a long list of potential other countries that may seek to enter once the TPP is functioning. There are however two very large countries that are not being talked about as potential members – China and India. Why is that?

The current and potential list is obviously based first of all on political, not economic, considerations. However, rather than discussing the politics of choosing the outer boundaries of the TPP zone, let us rather look at why it has taken so long to arrive at a treaty that all twelve states will be ready to ratify.

Take the question of dairy products. Canada protects them. New Zealand exports them. Canada is about to have elections. The party that governs Canada currently is afraid of losing these elections. Hence, there is no way Canada will sign on to a reduction of protection for its dairy farmers. New Zealand’s prosperity depends on being able to expand sales of dairy products.

Take another issue that involves New Zealand. It keeps its extensive medical benefits by using generic drugs extensively. So does Australia. Pharmaceutical companies in the United States are anxious to impose severe restrictions on use of generics, which hurt income from protected drugs. They call this “safeguarding intellectual property,” safeguarding being a euphemism for protecting.

To achieve this objective however various other countries in the TPP would not only have to promise multiple unpalatable measures but actually enforce them. The political problem for the United States is how to arrive at wording that will keep these other states in the TPP but not alienate a sufficient number of members of the U.S. Congress to endanger ratification of the TPP. So far, it has proved difficult.

One could go on about protecting sugar or defining what is a truck produced within the TPP zone. The essential point is that the TPP states have now missed the most recent “final” date for an accord. The headline reporting it by The New York Times was “What Was to Be the Last Of the Trade Pact Sessions Ends With Heels Dug In.”

Given various requirements of U.S. Congressional schedules, even if an accord were now to be reached, no vote could be taken in the U.S. Congress before 2016, an election year. It seems at the very least unlikely that the treaty would be ratified. If this is true of TPP, it is even more true of the negotiations for a trans-Atlantic treaty, which are at an earlier stage of discussion.

I return to my fundamental point. So-called free-trade treaties are about managing the protectionist interests of the various parties to these treaties. Whatever they do, the results are anti-free trade. To understand what is going on, we have to start with that, and evaluate any proposal with that in mind.