18 Aug 2015 – A leading Israeli journalist—writing in Haaretz, Israel’s oldest and most-prestigious daily newspaper—says “It’s Time to Admit It. Israeli Policy Is What It Is: Apartheid.” 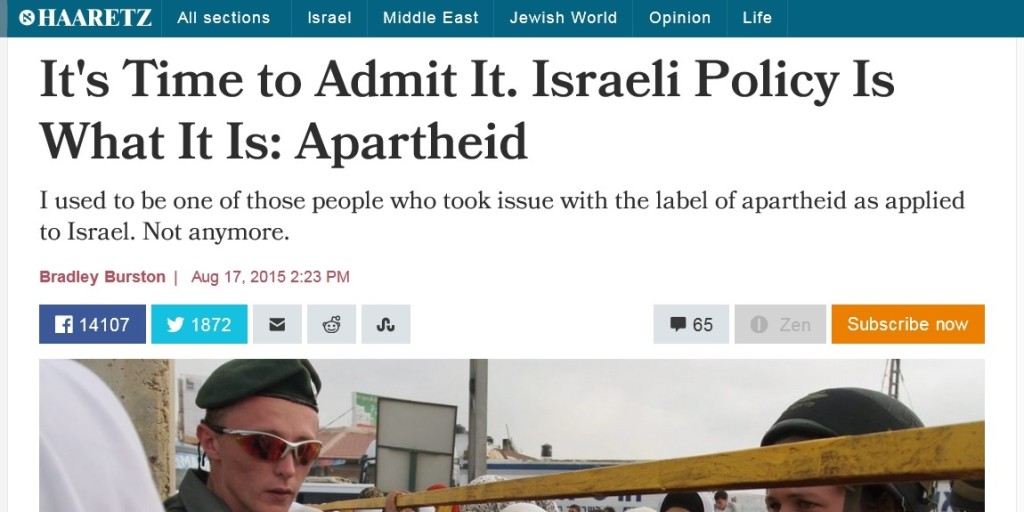 The author, Bradley Burston, a Haaretz columnist and Senior Editor of Haaretz.com, is well-known in the Israeli media. He has all the journalistic bona fides and decades of experience at distinguished outlets under his belt. For years, Burston served as a Gaza and military correspondent for the right-wing Israeli newspaper the Jerusalem Post. Later, he reported for renowned international news agency Reuters.

What I’m about to write will not come easily for me.

I’m not one of those people any more.  Not after the last few weeks.

Not after terrorists firebombed a West Bank Palestinian home, annihilating a family, murdering an 18-month-old boy and his father, burning his mother over 90 percent of her body – only to have Israel’s government rule the family ineligible for the financial support and compensation automatically granted Israeli victims of terrorism, settlers included.

I can’t pretend anymore. Not after Israel’s Justice Minister Ayelet Shaked, explicitly declaring stone-throwing to be terrorism, drove the passage of a bill holding stone-throwers liable to up to 20 years in prison.

The law did not specify that it targeted only Palestinian stone-throwers. It didn’t have to.

Just one week later, pro-settlement Jews hurled rocks, furniture, and bottles of urine at Israeli soldiers and police at a West Bank settlement, and in response, Benjamin Netanyahu immediately rewarded the Jewish stone-throwers with a pledge to build hundreds of new settlement homes.

This is what has become of the rule of law. Two sets of books. One for Us, and one to throw at Them. Apartheid.

An article like this published by an editor of Haaretz, often described as the Israeli equivalent of the New York Times, is a sign—one of many—that political attitudes are changing within Israel.

Burston is no anti-Zionist. He served in the Israeli military as a combat medic. Burston also helped to establish a kibbutz. In a 2010 article he identified as “a supporter of the idea of a truly democratic Jewish state.”

Nor is Burston a staunch leftist. In a 2011 column, he criticized “progressives” for what he claimed were their double standards toward Israel. If one had to make a generalization, Burston’s views can largely be seen as representative of those of many liberal Israelis.

Like many liberal Zionists, nonetheless, Burston is beginning to see more and more signs that the liberal Zionist dream has transmogrified into a nightmare.

The Death Knell for Liberal Zionism

Many polls predicted that the liberal Zionist Union coalition would win the March 2015 Israeli election. Instead, hardline right-wing Prime Minister Netanyahu was re-elected for a fourth term. When Netanyahu completes his present term, he will be the longest-serving prime minister in the history of Israel, having ruled longer than even founder David Ben-Gurion, often described as the “Father of Modern Israel.”

Netanyahu was re-elected on the explicit promise that Palestinians will never have an independent state. He also filled his government with right-wing extremists:

“There was a time when I drew a distinction between Benjamin Netanyahu’s policies and this country I have loved so long,” Burston remarks. “No more. Every single day we wake to yet another outrage.”

As examples of Israeli apartheid, the Haaretz editor writes:

Apartheid means Israeli officials using the army, police, military courts, and draconian administrative detentions, not only to head off terrorism, but to curtail nearly every avenue of non-violent protest available to Palestinians.

Late last month, over the explicit protest of the head of the Israeli Medical Association and human rights groups combatting torture, Israel enacted the government’s “Law to Prevent Harm Caused by Hunger Strikes.” The law allows force-feeding of prisoners, even if the prisoner refuses, if the striker’s life is deemed in danger.

Netanyahu’s Public Security Minister Gilad Erdan, who pushed hard for passage of the bill, has called hunger strikes by Palestinian security prisoners jailed for months without charge or trial “a  new type of suicide terrorist attack through which they will threaten the State of Israel”.

Only under a system as warped as apartheid, does a government need to label and treat non-violence as terrorism.

Burston is by no means the only well-known figure to describe Israel’s policies toward the indigenous Palestinians as a system of apartheid.

South African anti-apartheid leader Desmond Tutu insisted in no certain terms “I know firsthand that Israel has created an apartheid reality within its borders and through its occupation. The parallels to my own beloved South Africa are painfully stark indeed.”

Prominent indigenous and women of color feminists, including acclaimed scholars Angela Davis and Barbara Ransby, visited Israel in 2011 and recalled “see[ing] for ourselves the conditions under which Palestinian people live and struggle against what we can now confidently name as the Israeli project of apartheid and ethnic cleansing.” Several members of the delegation grew up in apartheid South Africa, in the Jim Crow South, or on US Indian reservations and witnessed striking parallels to their own experiences.

Legendary scholar Noam Chomsky, one of the most cited thinkers in human history, has long argued that Israel’s policies toward the indigenous Palestinians are in fact “much worse than apartheid.” “To call it apartheid is a gift to Israel,” he says.

Ben Norton is a freelance journalist and writer based in New York City. His work has been featured in a variety of publications. His website can be found at BenNorton.com.