Wadi al Nasera (Valley of the Christians) encompasses approximately 40 picturesque Christian hamlets in western Syria, located amidst the green plush rolling hills between Homs and the Lebanese border. Thirty of its villages are Christian, four are mainly populated by Alawi Muslims and one, Al Qalaa (aka Hosn village), just under the Crak des Chevaliers medieval fortress, was Sunni Muslim. It was literally pulverized by heavy and sustained government forces aerial bombardment once it became a supply base in 2013 for rebels inside the medieval crusader fortress.

I spent the past week visiting some of the oldest Wadi al Nasara Christian villages which include Marmarita, Al-Hwash , Zweitina, Muzina, Nasra, Mqaabra, al Mishtiaya, Blat,Tanurin, Anaz, Joir al-Afes, Hab Nimra, `Ash al-Shuha, `Amar al-Husn, `Ayn al-Barda, `Ayn al-Ajuzi, `Ayn al-Ghara, Kafra, Mashta Aazar, Al-Qllatia, Kayma, Masraa, Muklous, Bahzina, Joineyat, Al-Talla, Daghla, Amar, Mishtayeh and Rabah, agrees with many who come to Wadi al Nasera (Valley of the Christians) that the valley is most beautiful and welcoming area of Syria or of anyplace in the Middle East that he has visited. Its people who include Syrian Orthodox, Syrian Catholics, Greek Orthodox, Greek Catholics and Armenian Orthodox among others, add to its splendor. Some visitors come repeatedly, others annually for summer holidays or to experience one or more of the valleys seasonal cultural festivals that makes this part of Syria a major tourist attraction.

Nonetheless, Wadi Nasera has suffered much, as has most of Syria from the continuing conflict and the devastating loss of loved ones from terrorist acts. For a variety of reasons, the proportion of Christians in the Middle East has contracted from around 20 percent at the start of the 20th century to around 5 percent currently. Less than 1 percent of the world’s more than 2 billion Christians currently live in the Middle East, and it is likely that number will decrease even further.

From the very start of the current conflict, history and religion have fueled passions on both sides in Syria. This has become more pronounced as the conflict drags on, turning bloodier and more vicious by the month. The main target of the most sectarian-minded rebels isn’t Christians, but rather Alawites, the minority group who make up about 12% of Syria’s population, about the same as Christians until recently. The Alawites are a heterodox sect that branched off from Islam, and are considered by Muslim takfiri extremists more heretical than Christians.

Approximately one quarter of the Christian valley’s population have been forced to flee as refugees, according to Roman Catholic Priest, Father Hanna Salloum, owner of the Al Wadi Hotel in the village of Mishtayeh, who generously gave this observer his time and insites into have life has been like for Wadi al Nasara over the past few years. Soon the places of those who fled the valley were taken by other arriving refugees who correctly believed they would be welcomed in the Valley of the Christians. Father Salloum, a devout Christian and Syrian nationalist, insisted that all the rooms in his large 5-star hotel be made available without charge to refugees fleeing Homs and elsewhere. Arriving Christians, Muslims or non-believers were given shelter gratis on a first come first served basis. For more than one year his hotel was a teeming home to his countryman until jihadists were expelled from their stronghold less than two kilometers from his Al Wadi Hotel. Father Hanna Salloum is my kind of Christian.

Perhaps ten percent of those who fled from the more than 40 villages have returned and it is apparent to this observer that the Syrian army has now secured the Valley. Yet continuing hardships such as shortages of electricity, water, mazout (fuel oil), and general inflation persist. Additionally, this week’s soaring temperatures have caused some 13 deaths, ignited two dozen brush fires and sent two foreign journalists attending this week’s Al Wadi Festival in Homs Governorate to hospital.

According to an aide to His Beatitude, Kyrios Youhanna X, formerly, Youhanna X Yaziji, Patriarch of Antioch and All The East, who briefed this observer on 8/4/2015 at the 6th century monastery of St. George, before the current crisis there were approximately 1.2 million Christians in Syria. Today there are estimated to be fewer than 400,000. The population of Wadi Nasera was reduced by approximately 20% during 2012-2013, many fleeing to Christian areas of nearby Lebanon as well as internally. This main exodus followed the early 2012 arrival of al Qaeda affiliated militants including Jund al Sham. The jihadists occupied the medieval fortress, Crac des Chevaliers which towers above the southern entrance to the Wadi, until the Syrian Army was able to evict them in March of 2014. Villages below were regularly targeted by jihadist snipers and mortars as well as middle of the night terrorists slipping down from Krac des Chevaliers fortress, sometimes using tunnels, to slit throats of unsuspecting villagers. This observer has repeatedly heard from residents of Wadi Nasera that while every house has a light weapon, such as an AK-47, the terrorists were heavily armed with a variety of weapons and it was difficult to overpower them when they attacked. Recently, the population of Wadi al Nasera has swollen by more than 150,000, mainly Christians, who view the Wadi as among the safest places in Syria.

I do not believe the current suffering and atrocities being committed against Christians in Syria will not break the will of Al Wadi Nasera, the Valley of the Christians. Rather, it will fortify their resolution and beliefs in the New Testament. And I agree with the sages whom I have met among this close-knit, vital, highly educated, large family community that the future of the Christians in this great country and beyond is with the Muslims. This has been the case since the advent of Islam and its movement into this region 600 years after the arrival of Christianity. Historically, local Christian communities have sometimes welcomed Muslim ‘overlords’ when they freed them from the oppressive rule of Constantinople or Rome. In many places in Syria the two groups continue to reach out to each other. Even many rebel extremists, to the dismay of skeptics, claim that “personally” they don’t have anything against Christians.

Neither massive emigration of Christians to the West nor establishing a Christian state is a long tern solution to the current conflict. Throughout history invaders have arrived here, they have committed unspeakable atrocities, ruled for a period and disappeared while the Christian community has endured, prospered relatively and, in a sense, prevailed over the invaders. To wit, the Ottoman Turks, who ruled Syria from 1516 until World War I, relegated Christians to a second-class citizen status. Christians were allowed to practice their religion and govern themselves in matters that didn’t concern Muslims. But they were also required to pay special taxes to Constantinople, and there were plenty of restrictions on them when it came to interactions with Muslims. Wahhabism, the ascetic and harshly conservative form of Islam practiced in Saudi Arabia, is even tougher on Christians. And many others seeking hegemony have passed through this country—the Byzantines, Tamerlane, the Mongols, Mamluks, the Persians. Their likes have failed to subjugate the Christians of Wadi al Nasera.

The freed Nuns of Ma’loula temporarily working at St. George Monastary at the entrance of Wadi al Nasara waitng to return to Mar Takla monastery and their orphanage in Ma’loula (photo 8/4/2015 N. Makhoul).

Among the factors unifying the residents of Wadi al Nasera is the presence of a group of Nuns who operated an orphanage at Mar Takla monastery in Ma’loula to the south. The group of Greek Orthodox nuns was kidnapped in December of 2013 and held for three months by Jabhat al and before being released three months later in a prisoner exchange. Their new temporary home is St. George Monastery across from Krac de Chaveliers. This observer was honored to spend time with this charming, passionate, energetic, group of sisters on Aug/4/201*5 and we discussed many subjects. I was happy to share with Mother Superior, Pelagia Sayyaf, head of the Mar Takla monastery in Maaloula and her sisters recently acquired updated information about restoration work being done to their orphanage in preparation for their early return. One of the Nuns asked me about the condition of their large kitchen. By chance, two weeks ago I took a special interest, and some photos which I shared with the Nuns, of the kitchen where I painted some doors. The reason was that as a wannbe chef, I could not fail to examine their 6 foot by maybe 4 foot steel stove which has two large ovens and eight cooking rounds on its surface. They were happy to learn it was in excellent shape and that volunteers had cleaned up the large kitchen. They seem unconcerned that the roof of the kitchen had been hit by a rebel mortar as was no more. The sisters want to return to Ma’loula as soon as possible and hopefully before the end of August. They promise to return regularly to St George Monastery in Wadi al Nasara and stay connected with their new family. 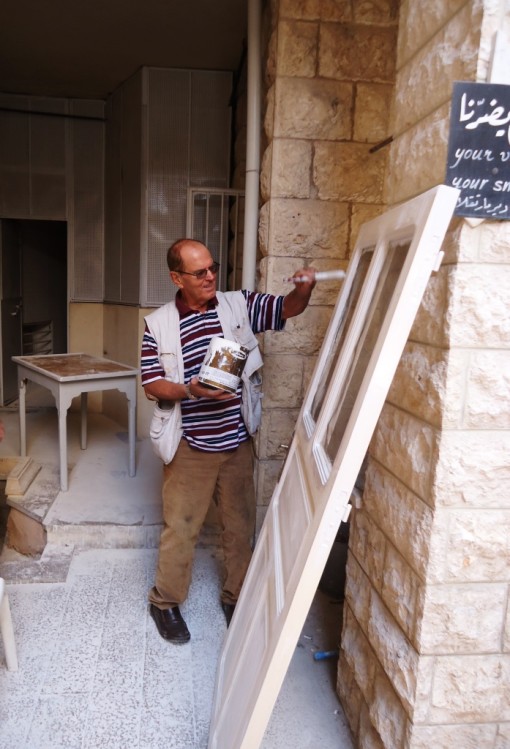 To paraphrase the words of a teacher this observer crossed paths with on 8/5/2015 at the Amigo grocery store on the main street of the village of al-Mishtayeh near, the Al Wadi Hotel at the base of Krac Des Chevaliers, ‘We shall fight for our freedom and fight for our faith. Many may die on the battlefield but no one surrenders. We are the defenders of faiths, ours and others, we will die or be free.”

Anticopyright: Editorials and articles originated on TMS may be freely reprinted, disseminated, translated and used as background material, provided an acknowledgement and link to the source, TMS: The Bravenhearts of Wadi Al Nasera, Syria, is included. Thank you.