The Consolidation of the Mexican Narco-State

17 Aug 2015 – A year ago, Mexico seemed to be on the verge of a profound transformation of its political system. During the months of October and November of 2014, hundreds of thousands of people took to the streets on numerous occasions in a vast uprising against impunity and for social justice. The forced disappearance of 43 student activists from the Ayotzinapa teacher’s college by security forces in Iguala, Guerrero, ripped the veil off of the myth of Mexico’s supposed “democratic transition” and exposed the depth of the corruption embedded in the country’s political class. An enormous wave of international solidarity with the Mexican people spread from Tokyo to Chicago, from Ferguson to Paris and from Buenos Aires to London. 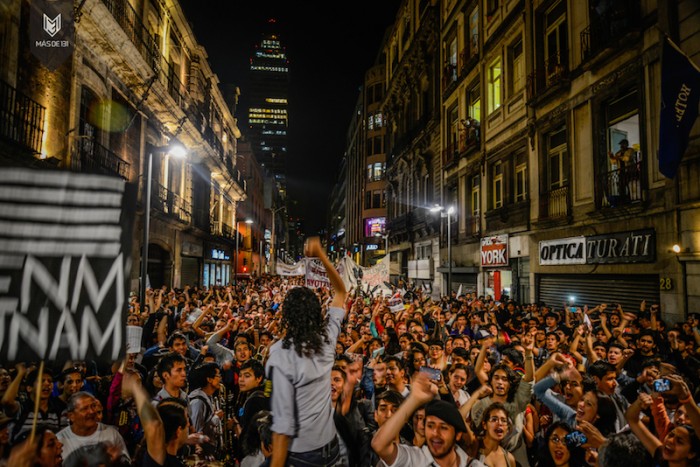 But nothing has happened. Not a single member of Mexican President Enrique Peña Nieto’s cabinet has stepped down. The Mexican Congress has not enacted any relevant legislation which could prevent the occurrence of another tragic act of political repression like the one which took place in Iguala. Only a handful of street cops and minor public officials have been accused for their responsibility in the Ayotzinapa disappearances. And the Mexican government continues to block independent investigators from interrogating the soldiers who were on duty the night of the massacre or allow them access to nearby military bases.

Meanwhile, the massacres, the repression and the impunity continue. On January 6, at least 16 protesters and members of community police forces were killed by federal forces in the State of Michoacán, most in cold blood. That very same day, Peña Nieto was in Washington meeting with his “friend” President Barack Obama, who took advantage of the occasion to ratify the US government’s blind support for the corrupt and repressive Mexican government. “Our commitment is to be a friend and supporter of Mexico,” he said. Obama even went so far as to hold up Peña Nieto as an exemplary human rights defender, asking him to help the United States to “promote human rights, democracy and political freedom” in Cuba.

Three months later, on May 22, federal security forces would once again commit a criminal massacre against the Mexican people. 42 civilians were indiscriminately shot down that day on the border between Michoacán and the state of Jalisco. Meanwhile, Mexican NGOs have revealed that the massacre of 22 youths by the military a year earlier, on June 30, 2014 in Tlatlaya, state of Mexico, was in response to an official directive which calls on the military to “finish off” suspected criminals “at late hours of the night.”

In recent weeks the situation has quickly started to unravel. This past July 19, the military violently burst into the indigenous community of Ostula, Michoacán, to disarm and take prisoner the leader of the local community police force, Semeí Verdía. Eyewitnesses heard the soldiers scream, “Long live the Knights Templars!” (the name of the local drug cartel) as they entered the town. In the process, the military allegedly killed a 12-year-old boy, Hidilberto Reyes, who happened to be making a purchase at a local store.

Ostula is a town with a long tradition of social activism, similar to Ayotzinapa, which has successfully defended itself for years both from narcotraffickers and corrupt police. The real reason for Verdía’s arrest is politics, not public security.

Indeed, the initial charges against Verdía were thrown out almost immediately by the judge since the weapons found on him had been provided by the government itself. Nevertheless, Verdía remains in jail today because the government immediately brought additional trumped-up charges against him in order to keep him behind bars. Just as has occurred with other community police leaders, like political prisoners Nestora Salgado and José Manuel Mireles, the government continues to ally with corrupt police and military officers instead of with community leaders.

Then, two weeks ago, on July 31, a photojournalist, Rubén Espinosa, 31, and an activist, Nadia Vera, 32, were tortured and assassinated in Mexico City (along with three others), creating an international scandal. Both were hiding out in the capital in response to death threats and intimidations they had received in the State of Veracruz as a result of their constant critiques of the corruption and attacks on the press orchestrated by Governor Javier Duarte, a close ally of Peña Nieto. In an interview shortly before being assassinated, Vera publicly held Governor Duarte responsible for any future attacks on her life. Espinosa also pointed the finger at Duarte in a series of interviews before his death.

Back in Guerrero, on August 8, Miguel Ángel Jiménez, the man who last October led the massive community effort to find and excavate dozens of clandestine graves around Iguala in search of the 43 missing Ayotzinapa students, was assassinated in cold blood while riding in a taxi in Acapulco. Jiménez was a leader of the Union of Organizations and Peoples of the State of Guerrero (UPOEG) and was tirelessly committed to bringing to justice the government officials and the narcotraffickers responsible for the constant flow of forced disappearances which have ravaged Guerrero for years.

Meanwhile, this past July 11, Mexico´s most dangerous international criminal, Joaquín “El Chapo” Guzmán, mysteriously escaped from jail through a mile-long tunnel dug under Mexico’s highest security prison. This occurred only two weeks after the United States government had formalized its extradition request to the Mexican authorities. A month has passed now since the escape, and despite the mobilization of tens of thousands of federal police and military officials somehow Guzmán continues to be on the loose. Mexican public opinion is absolutely correct to deduce that this could only possible with the highest level of government complicity.

It is an absolute disgrace that even after recent events in Mexico the Obama administration continues to prop up one of Latin America’s most corrupt and repressive political regimes. For instance, the State Department’s 2014 Human Rights Report openly protects Peña Nieto from international scrutiny and flat-out lies when it states that there are no reports of political prisoners, detainees or assassinations and that the Mexican government “generally respects” freedom of speech and assembly.

The supervising officer for that report, Roberta Jacobson, U.S. Assistant Secretary of State for Western Hemisphere Affairs, has been nominated by Obama to be the next U.S. Ambassador to Mexico. While systematically turning a blind eye to the humanitarian crisis in Mexico, Jacobson has been quick to condemn much lesser human rights violations in Cuba. It is time to drop the double standard and put an end once and for all to the bloody complicity of the United States with a government which systematically massacres, silences and imprisons innocent civilians.

Dr. John M. Ackerman is a professor at the Institute for Legal Research of the National Autonomous University of Mexico (UNAM), Editor-in-Chief of The Mexican Law Review, and a columnist for La Jornada newspaper and Proceso Magazine. You can connect with John via his blog or on Twitter @JohnMAckerman.