Vietnam War Half a Century Later

Jimmy Carter called a war waged in Vietnam by the United States — a war that killed 60,000

Americans and 4,000,000 Vietnamese, without burning down a single U.S. town or forest — “mutual” damage. Ronald Reagan called it a “noble” and “just cause.” Barack Obama promotes the myth of the widespread mistreatment of returning U.S. veterans, denounces the Vietnamese as “brutal,” and has launched a 13-year, $65 million propaganda program to glorify what the Vietnamese call the American War:

“As we observe the 50th anniversary of the Vietnam War, we reflect with solemn reverence upon the valor of a generation that served with honor. We pay tribute to the more than 3 million servicemen and women who left their families to serve bravely, a world away . . . They pushed through jungles and rice paddies, heat and monsoon, fighting heroically to protect the ideals we hold dear as Americans.”

Which ideals might those have been? Remember, this was the bad war in contrast to which World War II acquired the ridiculous label “good war.” But the Pentagon is intent on undoing any accurate memory of Vietnam. Members of the wonderful organization, Veterans For Peace, meanwhile have launched their own educational campaign to counter the Pentagon’s at VietnamFullDisclosure.org, and the Vietnam Peace Commemoration Committee has done the same at LessonsOfVietnam.com.

Already, the Pentagon has been persuaded to correct some of its inaccurate statements. Evidence of the extent of the killing in Vietnam continues to emerge, and it has suddenly become universally acceptable in academia and the corporate media to acknowledge that presidential candidate Richard M. Nixon secretly sabotaged peace talks in 1968 that appeared likely to end the war until he intervened. As a result, the war raged on and Nixon won election promising to end the war, which he didn’t do. There would seem to be at work here something like a 50-year limit on caring about treason or mass-murder. Imagine what it might become acceptable to say about current wars 50 years hence!

And yet, many lies about Vietnam are still told, and many truths are too little known. After Nixon sabotaged peace negotiations, U.S. and Vietnamese students negotiated their own People’s Peace Treaty, and used it to pressure Nixon to finally make his own.

“Suppose Viet Nam had not enjoyed an international solidarity movement, particularly in the United States,” writes Madame Nguyen Thi Binh. “If so, we could not have shaken Washington’s aggressive will.” 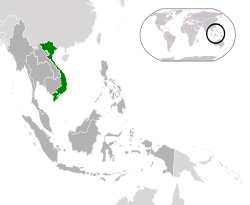 “Be it known that the American and Vietnamese peoples are not enemies. The war is carried out in the names of the people of the United States and South Vietnam but without our consent. It destroys the land and people of Vietnam. It drains America of its resources, its youth and its honor.

“We hereby agree to end the war on the following terms, so that both peoples can live under the joy of independence and can devote themselves to building a society based on human equality and respect for the earth. In rejecting the war we also reject all forms of racism and discrimination against people based on color, class, sex, national origin, and ethnic grouping which form the basis of the war policies, past and present, of the United States government.

“1. The Americans agree to the immediate and total withdrawal of all U.S. forces from Vietnam.

“2. The Vietnamese pledge that, as soon as the U.S. government publicly sets a date for total withdrawal, they will enter discussions to secure the release of all American prisoners, including pilots captured while bombing North Vietnam.”

Nine leaders of the U.S. antiwar movement of the 1960s have put their current thoughts down in a forthcoming book called The People Make the Peace: Lessons from the Vietnam Antiwar Movement. The movement of the 1960s and early 1970s was widespread and dynamic beyond what we know today. It was part of a wider culture of resistance. It benefitted from the novelty of televised war and televised protest. It benefitted from hugely flawed but better-than-today economic security, media coverage, and election systems, the impact of the draft, and — of course — the creativity and courage and hard work of peace activists.

Those contributing to this book, and who recently returned to Vietnam together, are Rennie Davis, Judy Gumbo, Alex Hing, Doug Hostetter, Jay Craven, Becca Wilson, John McAuliff, Myra MacPherson, and Nancy Kurshan. Their insights into the war, the Vietnamese culture, and U.S. culture, and the peace movement are priceless.

Nixon recorded himself fretting about the People’s Peace Treaty with his staff. Two years later, he eventually agreed to similar terms. In the meantime, tens of thousands of people died.

And yet the Vietnamese distinguish clearly, as they always did, U.S. peace advocates from the warmongering U.S. government. They love and honor Norman Morrison who burned himself to death at the Pentagon. They carry on without bitterness, hatred, or violence. The rage still roiling the United States from the U.S. Civil War is not apparent in Vietnamese culture. Americans could learn from Vietnamese attitudes. We could also learn the lesson of the war — and not treat it as a disease called “the Vietnam syndrome” — the lesson that war is immoral and even on its own terms counter-productive. Recognizing that would be the beginning of health.

Anticopyright: Editorials and articles originated on TMS may be freely reprinted, disseminated, translated and used as background material, provided an acknowledgement and link to the source, TMS: Vietnam War Half a Century Later, is included. Thank you.