33 Years After the Sabra-Shatila Massacre Takfiri Calls for “Intifada!” Waft from Lebanon’s Camps

“Palestinians have no reliable friends Abu Ammar! This summer proved it!  Where are the worthless Arabs? Only some foreign implanted “Resistance” elements that for their own hegemonic political purposes want to play the Palestinian card and wear your keffiyeh and pose for photos making the V for Victory sign! This disgusts me Abu Ammar! Palestinians must rely only on themselves. The PLO must return to “Revolution until Victory!”  You should postpone your exit from Lebanon and you must protect the camps. Without the gun to protect them what does Reagan’s olive branch “we will give you back most of Palestine if you leave Beirut” convey? Nothing worth anything in my opinion”!

Thus was the plea to PLO leader Yassir Arafat, made 33 years ago by a distraught and prescient American journalist and Palestinian advocate from Atlanta, Georgia named Janet Lee Stevens. At the time she was four floors underground in Arafat’s Fakhani South Beirut bunker across from Arab University. She and her colleagues were secure from American bombs that rained down 12 hours that day from Zionist aggressors as she made her case.

The Palestinian leadership was preparing to “flee” Lebanon, (Janet’s word for the planned PLO “evacuation with dignity”) Janet emphatically opposed the PLO departure from Lebanon in the summer of 1982 insisting that it would allow a reign of terror against the hundreds of thousands of Palestinians who had no option but to remain behind, deeply mired in the camps. Janet’s appeal was made in the presence of this observer and the late Imad Mughniyeh, 19 years old at the time, and a few others.

Mughniyeh  had joined the Palestine revolution at the age of 14, and according to author Kai Bird may had received military training  from the CIA as part of a US initiative to “Professionalize” Arafat’s security unit. He had been given a job two years earlier with the PLO Force 17 whose mandate included a unit of Arafat bodyguards. After 1982, and disillusioned with the PLO, Imad affiliated with the pre-Hezbollah Islamic Amal.

Like many others, Mughniyeh owed his job to his friend and mentor, the PLO’s “”Red Prince” Ali Hassan Salameh who was assassinated on his way to his nieces’ birthday party at 4 p.m. on January 24, 1979 on Beka Street in the Verdun neighborhood of Beirut.

A German woman, Erika Chambers, posing as an artist and pro-Palestinian activist, but in reality a Mossad agent now living in Israel on a handsome US funded Mossad pension, watched Salameh’s car as it passed under her 8th floor balcony, pushed a button and detonated a parked explosive-rigged Volkswagen Beetle.

Janet’s words to PLO Chairman Arafat were prophetic and are as true today as when she spoke them eight months before her death on April 18, 1983.

There is not a lot of hope in Lebanon’s Palestinian camps this week as foreigners arrive in solidarity, as many do annually; and pay tribute to the more than 3000 victims of the September 1982 Israeli facilitated Sabra-Shatila Massacre. 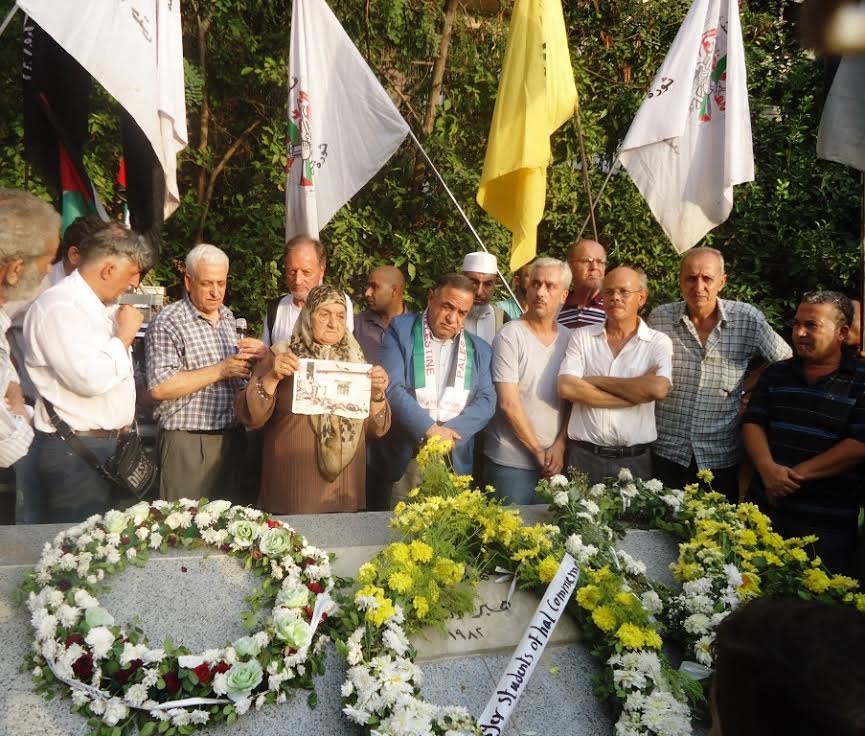 ​On 9/15/2015 the first of three days of commemorative events at Shatla camp in tribute to the victims of the September 16-18 Massacre at Sabra-Shatila. (Photo credit: the Sabra-Shatila Scholarship Program (SSSP)

This past year the Syrian crisis has exported to Lebanon enormous unforeseen demographic and economic pressures on Lebanon and on each of the dozen Palestinian camps and nearly two dozen “gatherings.” Recent UN and EU studies document what virtually all quality-of-life social-economic indexes make plain which is that the approximate quarter million Palestinians actually living in Lebanon are continuing to sink ever deeper into a dark abyss.

The Palestinian camp populations here are not exempt from the politics and violence arriving from Syria. Some of the militia and Islamist movements warring next door are enticing and pressuring camp residents to take up arms and join various religious and secular militias.

It is true that some foreign powers are seeking to influence events in Syria and Lebanon with cash, weapons, and ideology. But as increasingly is being heard in Syria and elsewhere, “Da’sih (ISIS) has many mothers.” Meaning that it is a gross oversimplification and a bit inane to insist that the creation and appeal of Islamist groups and the “terrorist-takfires” is yet another conspiracy  by the Saudi’s, Iranians, Gulf Cooperation Council (GCC)Turks, and/or Americans, EU, NATO or others. It is far more complicated than what the bewildering assortment of water carriers for various paymasters asserts. Indeed, as Iran’s President Rohani repeated last week, some of the funders, too clever by half, are experiencing shock to learn that the evil being spread by groups they may have aided-hoping for sundry positive results—are now targeting and planning to destroy them.

Al Qaeda affiliated groups have been analogized to opportunistic bacteria or virus.  They may be dormant and unnoticed for long periods. But if they receive a certain amount of light, some oxygen, and warm temperature, something to feed on and perhaps attach themselves to they may quickly grow and metastasize as they acquire and with time perfect their deadly capabilities.

Causative of some of these groups that are attracting youngsters and others in Lebanon’s camps are the same factors suffered for decades in this region, and recently they have intensified. Some examples, among others, are lack of jobs, widespread and deepening poverty, feelings of hopelessness and lack of control over one’s life and future, corrupt politicians who do not deliver public services while enriching themselves, abuse by security services and heavy-handed police and armed forces widely believed to be selectively deployed for political purposes.

Particularly deadly in Lebanon’s camps is the growing poisonous Sunni-Shia and ethno-nationalist sectarianism. Adding to these problems, Lebanon’s Palestinian camps often have tap water that is dirty and salty, surface sewage, and electricity cuts on the average of ten times a day. There are generally no street lights, only a few paved roads with many of the dwellings increasingly showing signs of crumbling. Crime, drug-use, infectious and communicable diseases, child respiratory diseases, domestic violence, school dropouts and teenage pregnancies are all increasing.

The current and long overdue upswing in civil activism across Lebanon, seen in the camps as a breadth of fresh air, with its calls for deep change and intifada are in tandem with the spreading rejection of what are considered the Lebanon’s unsalvageably corrupt politicians.  Many of these former warlords, now political lords thanks to  their self-granted amnesty without which many could be in prison for life, appear daily on the TV “news” bulletins and  regurgitate rubbish. This as they work to deepen sectarian divides to keep their particular “wasta sects” docile.

This includes the intensifying Sunni-Shia religious war that is beginning to spread inside the camps. A recent survey by the “You Stink” activist group which seeks to oust corrupt politicians found that approximately 90% of Lebanon’s population surveyed want all the current leaders replaced and believe that massive civil disobedience may be required to get rid of them. Many refugees in the camps want to capitalize on the recently revealed civic activist energy of the new groups to realize their own political rights.

The danger to the Palestinian camps such as Ein el-Helwe is the rising violence.  Two days ago (9/11/2015) eight grenades were thrown in different neighborhoods of the camps. Several gunmen also opened fire, seemingly out of nowhere according to eye-witnesses. Several people were killed last month during Fatah Movement, Jund al Sham and Fatah el Islam gunmen fought. Situated near the city of Sidon, Ein al-Helweh is home to approximately 80,000 Palestinian refugees, including an estimated 10,000 who fled the seemingly endless civil war in Syria, according to camp officials. The Joint Palestinian Security Force (JPSF) set up in 2014 to police Ein al_Helweh is anemic and so far largely ineffective.

Cynically playing the Palestinian card while conspiring to grind down, humiliate, disparage, provoke, marginalize, and deprive Palestinians in Lebanon of their anchored-in-international humanitarian law most elementary civil rights to work and purchase a home is the equivalent of Lebanon’s “leaders” picnicking on Mt. Vesuvius. And what happened  back in AD 79 at  Pompeii and Herculaneum may well happen here as the Takfiris slip into the camps.  An overdue reckoning may explode.

The political “leaders” in Lebanon who are wringing their hands and lamenting the growing number of “Terrorist-Takfiris” working to convince Palestinian refugees to join the “sacred Islamic cause of liberating Palestine” are well advised to reflect on the past five years in this region as well as the  nearly 67 years of repression of Palestinians in Lebanon.

The pressure inside Lebanon’s camps is building as the political temperature rises daily. Those who bleat that Palestine is their bloodstream issue and who circulate  selfies of themselves, wearing the keffiyeh as some  politicians here do, can help avoid an approaching catastrophe on the order of what continues in Syria.

One way is to stop blocking the election of a President and convening Lebanon’s Parliament. And when the MP’s assemble to cut up the legislative agenda pies, put its members to work earning a part of their hefty salaries.  In just 90 minutes the Parliament of Lebanon can repeal the racist 2001 law that outlaws home ownership for Palestinians and after nearly seven decades, grant the third generation of Palestinian refugees in Lebanon he same right to work and home ownership that every reader of these words is granted the moment her or his foot touches Lebanese soil or the tarmac at Beirut airport.

Lebanon’s politicians generally do not want this and neither does Da’ish (ISIS).  Both groups seek to keep the Palestinian’s in Lebanon oppressed for their own political advantage.

Denying justice and blocking elementary civil rights for Palestinians in Lebanon is subverting peace in this region and the “terrorist-takfiri” elements are manipulating this reality to establish bases in Lebanon’s camps.

This, as jihadists prepare an “Intifada” appealing for “Revolution until Victory” on this 33rd anniversary of the Zionist encouraged massacre at Sabra-Shatila.

Anticopyright: Editorials and articles originated on TMS may be freely reprinted, disseminated, translated and used as background material, provided an acknowledgement and link to the source, TMS: 33 Years After the Sabra-Shatila Massacre Takfiri Calls for “Intifada!” Waft from Lebanon’s Camps, is included. Thank you.