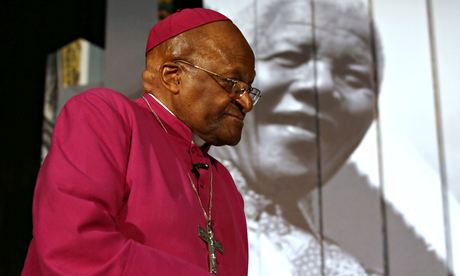 Bishop Desmond Tutu, born 1931, first worked for three years as a high school teacher. Then he studied theology and became an Anglican priest in 1960. From 1962‑66 he pursued further theological studies in England and then taught theology in South Africa.

In 1975 he was appointed Dean of St. Mary’s Cathedral in Johannesburg, the first black to hold that position in a church with a predominantly white congregation. In 1978 he became the first black General Secretary of the South African Council of Churches.

In 1984 he won the Nobel Peace Prize for his nonviolent struggle against apartheid. In 1995, one year after the first democratic elections in which all South Africans were allowed to participate, President Nelson Mandela appointed Bishop Tutu to head the 17-member South African Truth and Reconciliation Commission, which exposed atrocities committed by all sides during the long apartheid regime.

Perpetrators of politically motivated crimes who came forward and honestly told the truth about what they had done and asked for forgiveness were granted amnesty. The hearings were broadcast live on radio, and millions of people listened. Bishop Tutu’s charisma was an important factor in the success of the commission in bringing about a measure of healing to the nation.

When perpetrators and victims faced each other before the commission and a tense audience, he would often begin the hearings by asking everyone to sing together. This took off some of the tension. Here is one example of how he conducted those hearings and helped bring about reconciliation.

Beth Savage, a 50-year-old white woman, who was an opponent of apartheid, had gone with her husband to a whites only club. She was severely wounded in a grenade attack by some young members of the Pan African Congress, so much that after she returned home from the hospital, her children had to feed, bathe and clothe her. She could not even pass through security checks at an airport without setting off alarms because metal fragments were still lodged in her body. After she told her story, Bishop Tutu asked her what she wanted.

“I do not want revenge,” she said, “all I want is to meet the people who did this and ask them why.” Bishop Tutu got up, embraced her, and said, “You are a great woman, we need you in South Africa.” She did meet with those who perpetrated the attack, and they expressed remorse about what they did. She has been meeting with them on a regular basis since. They have become friends.

Anticopyright: Editorials and articles originated on TMS may be freely reprinted, disseminated, translated and used as background material, provided an acknowledgement and link to the source, TMS: Bishop Desmond Tutu, is included. Thank you.