Blowback on a NATO Beach

5 Sep 2015 – We’ve had it coming. And when it came, virtually the whole planet reacted with stunned silence. Sometimes it takes just a photograph to put a noxiously complex version of hell in perspective.

A man holds a poster with a drawing depicting drowned Syrian toddlers during a demonstration for refugee rights in Istanbul, Turkey, September 3, 2015. © Osman Orsal / Reuters

Little did Nilufer Demir, 29, the female photojournalist of the Turkish Dogan News agency know that the moment she saw little Aylan Kurdi, 3, washed ashore at the Ali Hoca Burnu beach near Bodrum, she would be making history.

Aylan is alone, as if suspended by the immense solitude of death, just as his family’s dream of offering him a new life in a new continent away from death and destruction was about to be fulfilled. It’s as if his lone lifeless body at the shores of a NATO beach was also about to prefigure the death of Europe – or the death of a once pan-European dream of solidarity and compassion. 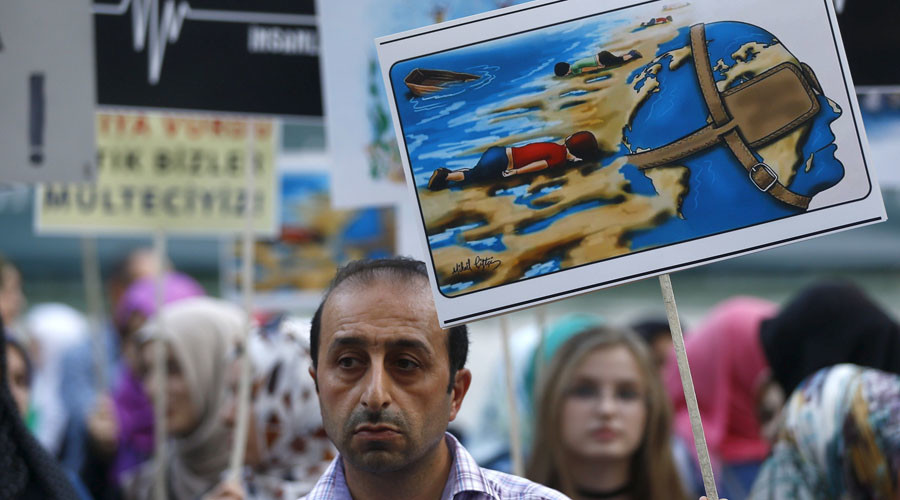 A man holds a poster with a drawing depicting drowned Syrian toddlers during a demonstration for refugee rights in Istanbul, Turkey, September 3, 2015.

Hannah Arendt once wrote movingly about the banality of evil, referring to the mechanism of fascism and Nazism. Aylan’s lifeless body now illustrates the banality of an evil he was trying to flee: the “arc of instability”, a Pentagon self-fulfilling prophecy.

So to put hell in perspective we must retrace some steps of the arc. 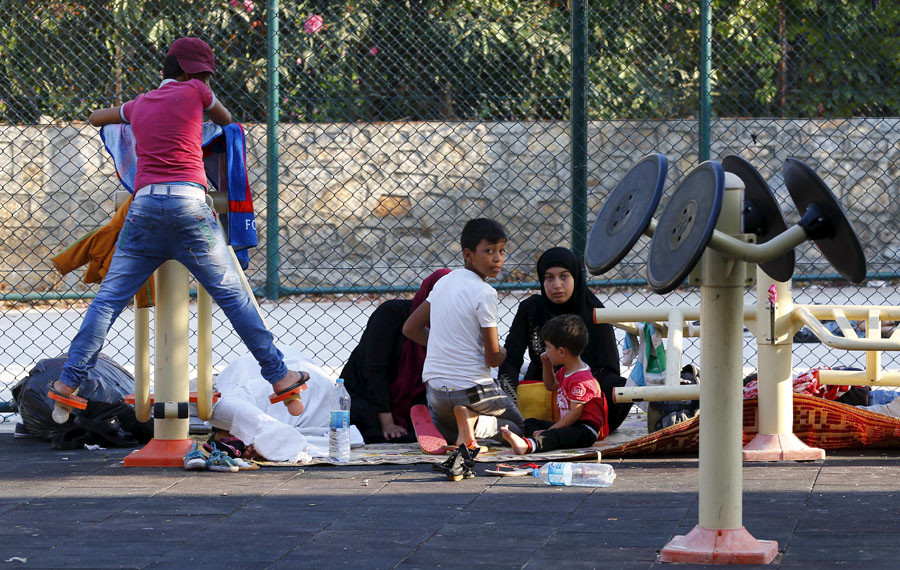 A Syrian family takes shelter at a playground in the resort town of Bodrum, Turkey, September 4, 2015. © Murad Sezer / Reuters

Back to Shock and Awe

We’ve had it coming when the “we’re the new OPEC” Bush administration invaded, occupied and destroyed Iraq – creating the set-up for the establishment of Al-Qaeda in Iraq.

We’ve had it coming when the Petraeus surge bribed Sunnis to half-heartedly fight Al-Qaeda in Iraq – which then took its time to reorganize in the heart of the desert, change its name to Islamic State and plot a comeback.

We’ve had it coming when NATO, enthusiastically “led” by London and Paris, and allied with hardcore Salafi-jihadis, set out to duly “liberate” Libya into a failed state run by militias.

We’ve had it coming when the Obama administration, allied with the usual Persian Gulf monarchical lackeys, sold an Arab Spring myth to the world by encouraging “moderate” rebels to “liberate” Syria into a wasteland.

We’ve had it coming when US intelligence supported or at best “ignored” the jihadi free flow between Libya and Syria.

We’ve had it coming when the most powerful satellite surveillance system ever simply failed to detect a gleaming white Toyota column of the rebranded ISIS/ISIL/Daesh crossing the Syrian desert into Iraq to take over Mosul.
We’ve had it coming when ISIS/ISIL/Daesh – following a willful decision taken in Washington – was allowed to tear Sykes-Picot to shreds, taking over large swathes of both Syria and Iraq by guile and terror tactics.

We’ve had it coming when ISIS/ISIL/Daesh took Kobani, in Syrian Kurdistan, just to be dislodged essentially by PKK/YPG Kurd militias, not by US bombing raids.

We’ve had it coming when ISIS/ISIL/Daesh gloated over its prowess by profiting not only from oil smuggling and a micromanaged theatre of cruelty – videotaped beheadings, the destruction of archeological pearls – but also wreaking havoc enough to vastly increase the numbers of an uncontainable refugee crisis.

Aylan was a Syrian Kurd fleeing from ISIS/ISIL/Daesh.

Aylan was also one refugee among millions fleeing “liberation” bombing and the convoluted ramifications/unintended consequences of GWOT – the global war on terror – in the “arc of instability”, from Afghanistan and the tribal areas of Pakistan to Yemen, Somalia, Iraq, Syria, Libya, Mali.

These refugees are poor but they are also middle-class, like Aylan’s family. Thousands of them die in the Mediterranean, the Mare Nostrum of Roman times now converted into Cemetery Nostrum; 3,500 dead in 2014, over 2,000 since early 2015.

UNHCR detailed fifteen ongoing wars since 2010; eight in Africa (including Libya, Mali, northern Nigeria and South Sudan); three in the Middle East (Syria, Iraq and Yemen); one in Europe (Ukraine – with refugees absorbed by Russia); and three in Asia (Kyrgyzstan, Myanmar and Pakistan).

The absolute majority of refugees are from Syria. By early 2015, UNHCR was already cataloguing no less than an astounding 11.7 million displaced Syrians – from an initial population of 23 million. The situation that European public opinion now seems to be awakening to is so dramatic that UNHCR automatically recognizes as a “refugee” every single person fleeing Syria.

The “West” also seems to have forgotten, but still 4.1 million refugees are Iraqis; 1.5 million of them are internally displaced.

At least Germany, to its credit, is showing political will; Berlin expects to welcome at least 800,000 refugees by the end of 2015. 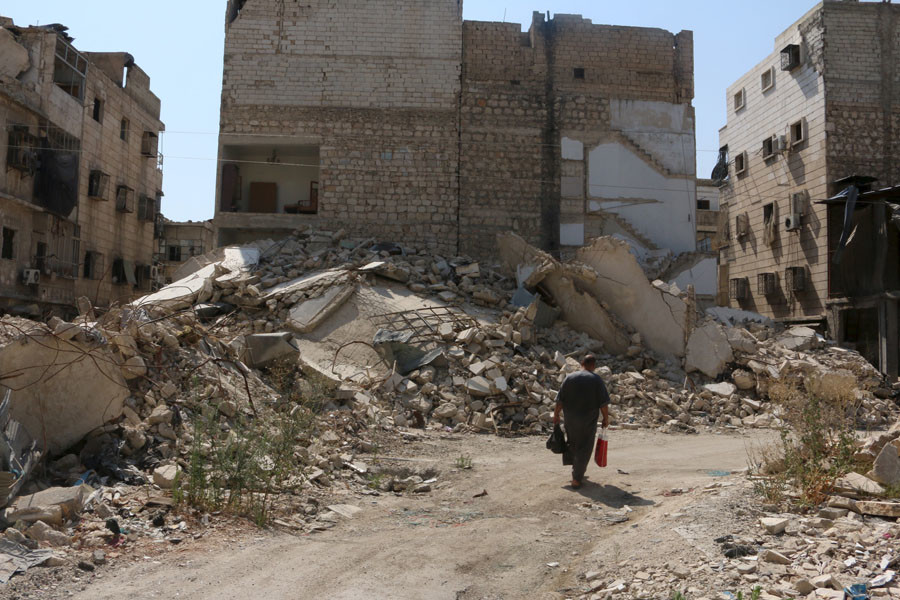 A man walks along a damaged street in the al-Katerji district in Aleppo, Syria July 29, 2015. © Abdalrhman Ismail / Reuters

Welcome to the Bombing King

Yet across Europe, it’s mostly ugly. Denmark wants to pay Turkey to halt Syrian refugees behind its borders. The Netherlands wants to cut off food and shelter for people who fail to qualify as refugees. Britain opposes the European Commission’s refugee quotas. Hungary is building a barbed wire wall of shame along the border with Serbia.

Already four million Syrian refugees are living in Turkey, Lebanon and Jordan.
Absolutely none of these refugees, especially from Syria, Iraq and Libya is seeking asylum – or is being offered asylum – by the immensely wealthy Persian Gulf petromonarchies, whose ideological matrix is Wahhabism/Salafi-jihadism.

Oh, no. No “swarm” (David Cameron’s expression) of refugees disturbing King Salman, responsible for the illegal bombing – with American weapons and profiting from US satellite intelligence – of Yemen, with accompanying humanitarian crisis, and duly received with pomp and circumstance by US President Barack “Drill, baby, drill” Obama this Friday.

No refugees for Qatar, which would rather sponsor global crowd pleaser Barcelona and buy every building in sight from Madeleine to Opera in Paris while actively involved in the total destruction of Syria.

The Pentagon/NATO “liberation by bombing” campaign all across the “arc of instability” shows no sign of losing steam, helped by wealthy Wahhabis and dodgy players such as the government in Ankara. Still, for millions of people, refuge inside an increasingly fearful, intolerant, xenophobic and austerity-devastated eurozone is still a better option than death and destruction.

We’ve had it coming from the beginning. There will be more blowback. An immensely sad, solitary form of blowback – washing ashore, in silence, on a NATO beach.