Debunking the Myth of American Exceptionalism 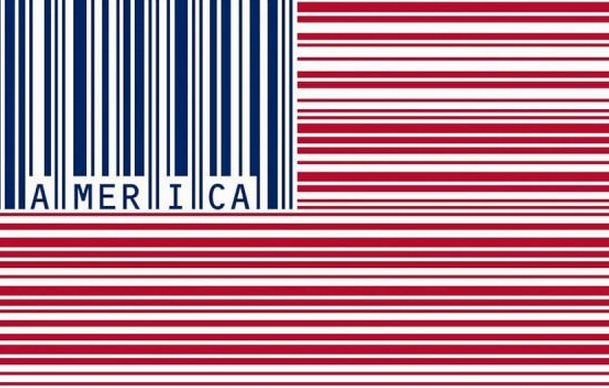 The myth of American Exceptionalism is widely, but perhaps insincerely, believed by most American thought-leaders and political and economic elites, whether they are radical Republican Party members/voters or are members/voters of the moderate “Republican” wing of the Democratic Party.

Members of the democratic wing of the Democratic Party and anybody that espouses Green Party values (whether they are registered members or not) are skeptical of the mass media’s constant reportage on American Exceptionalism.

Oh, America is certainly an exceptional nation, all right, but the reality is that most of the evidence of exceptionalism should be sources of sorrow, shame and embarrassment. All American patriots, including the pseudo-patriots who espouse the classical fascist/nationalist notion of “My nation, right or wrong”, should be on their knees repenting of what America has done on behalf of that misbegotten belief, starting with the “patriotic” genocidal massacres of the aboriginal Native Americans, the quasi-genocide of America’s African slaves, the Monroe Doctrine and Manifest Destiny.

Take the fact that America leads the world in the percentage – and total numbers – of its citizens that are incarcerated (and that includes the statistics from such previously totalitarian communist nations (and now newly capitalist) such as the USSR, Russia and China). 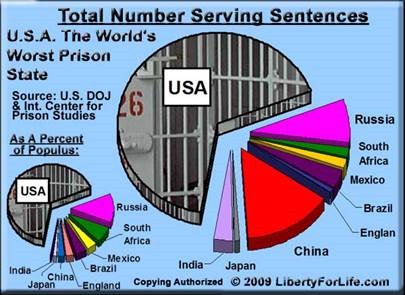 America is – embarrassingly so – exceptional in one major area. It leads the world in military expenditures, spending approximately the same amount that the rest of the world combined spends, despite the fact that there are no nations that have the naval, air or land combat capabilities that could repel or withstand even a single day of full-fledged American military assault (for which the Pentagon probably already has contingency plans). Every American Special Forces soldier knows in his heart of hearts that, compared to his highly lethal, highly trained killing unit, Nazi Germany’s Wehrmacht soldiers and Luftwaffe airmen were pussies.

<<<Exceptional America, With 5% of the World’s Population, Spends more on Militarism Than the Rest of the World Combined>>>

America’s political elites represent only 5% of the world’s population, and yet, because of the Myth of American Exceptionalism, they act like they deserve to rule the world. If the truth were to be told, American politicians are often the laughingstock of the rest of the developed world because of their obvious historical illiteracy and their moral imbecility. Showing no humility or self-understanding, most self-deluded, bullying political candidates (watch any GOP presidential debate for proof) still believe that, because of America’s military and economic power, Americans are somehow exceptional. (These over-privileged millionaire candidates were, as the old saying goes, “born on third base and think that they just hit a triple”.)

But whenever someone has the courage (or temerity) to say out loud that “those emperors of ours have no clothes”, it becomes apparent to everybody that they are largely lapdogs to the elites and therefore obedient to and dependent on the largesse of any number of secret, unelected, corporate bribers/paymasters/lobbyists and afraid of not complying with the wishes of the highly decorated, unelected brass in the Pentagon who are drawing $100,000+ annual military pension payments and don’t want to mess with the gravy train..

<<<Are Corporate Campaign Contributions Bribes or What?>>>

America’s political system is dominated by campaign “contributions” from major “donors” (better characterized as “investments” or “bribes”), with promised “paybacks” that come from the “donee” or “bribee”. As a result, our elected legislators (and whomever is the “current occupant” of the Oval Office) manage to spend/waste more taxpayer dollars complying with the desires of their paymasters and helping cover for the military destabilization of the rest of the exploitable world (under the guise of fostering peace in the world by killing alleged “bad guys with guns”).

A case in point is the ubiquitous multi-billion dollar propaganda campaign with which the Pentagon has been blanketing the TV, radio and print media for the past year or so. Some cunning entity has decided to spend billions of scarce dollars trying to glorify America’s past wars (even the illegal and criminal ones), making “exceptional” heroes of every honorable or dishonorable soldier and veteran, even the sadistic ones who were torturers and sexual abusers. They are even trying to honor and justify the atrocity-producing, inglorious Vietnam War.

The Pentagon is probably sensing an important congressional initiative to cut the excessive, wasteful military spending that has contributed so much to our nation’s $17,000,000,000,000 (17 trillion) national debt and impending national bankruptcy. If the past is prologue, the initiative is doomed to fail if the Pentagon and the war-profiteering corporations have anything to say about it.

The total price for “defending” us over-privileged 5% of the world from foreign enemies is approximately what the rest of the world (combined) spends on their militaries. That sobering reality includes the “defense” spending of China, Russia, Iran and North Korea, our allegedly worst potential enemies, whose citizens don’t want war any more than do most Americans. With unaffordable spending like that, what could possibly go wrong?

Study the two charts below and re-evaluate your impression that America is exceptional. 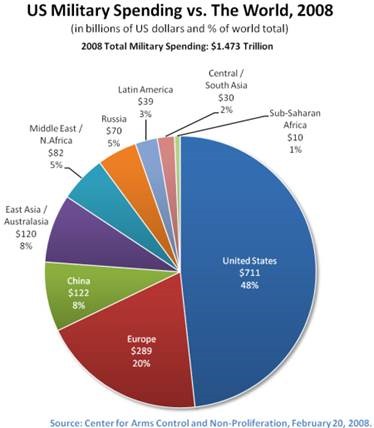 US military spending vs spending on domestic programs of social uplift 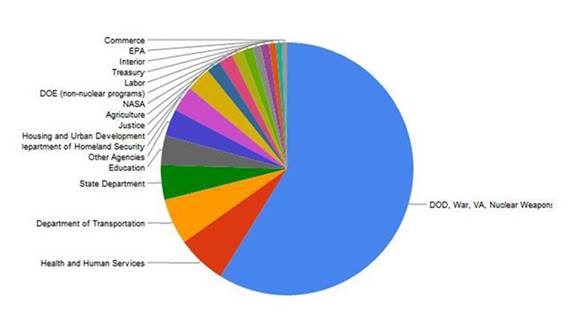 A few statistics and a little re-education will prove the true nature of American exceptionalism, but the reality is other than what the propagandists want us to believe. The United States is exceptional only in ways that should embarrass all Americans.

<<<Qui Bono (who benefits)? (The key forensic question to find out who has a motive for a crime)>>>

And who benefits from the above examples of American Pseudo-exceptionalism?

It doesn’t take much critical thinking to discover that the main benefactors of the propagation of the Myth are the wealthy elites in the banks, Wall Street’s institutional investors (including the foxes in the US Treasury Department’s henhouse) and those corporate predatory lenders that profit from the interest payments from the above noted 1) credit card debtors, 2) college loan debtors, and 3) mortgage debtors. Those “investments” are the reason that these sociopaths are at the top of the income inequality gap.

The elites that have been eagerly snapping up US Treasury debt securities over the many decades of US “borrow and spend” economic stimulation. America’s military buildup was guiltlessly underwritten by those elites, including the gruesome destabilizing overseas wars that created so many economic opportunities. These war profiteers are now safely conspiring behind boardroom doors, counting their money behind gated community walls and probably vary happy to pay armed bodyguards to keep the angry “riffraff” away.

They are collecting their perpetual quarterly interest payments (over $100,000,000,000 (100 billion annually) thanks to the investments they made that paid for the Vietnam War and the other military misadventures (particularly Ronald Reagan’s massive nuclear arsenal buildup in the 1980s that resulted in the de-stabilizing and unaffordable arms race with the USSR). These guys are laughing all the way to the bank and, thanks to the continued propaganda that their bought and paid for media obediently spews out for them, their amoral activities remain unexposed and unpunished.

But that isn’t the whole story. Below is another image that needs to be shown, one that should be worth a thousand words. 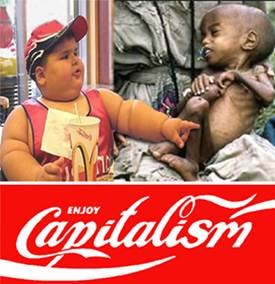 Guess which child is a well-fed, proud-to-be-an-American boy, whose parents (and culture) may think that he has a God-given right to more food than he deserves or needs, and who may never have seen the reality – nor understood the sources – of human suffering and starvation. These otherwise good people are likely to be oblivious to the suffering of the millions of non-American, non-white, non-Christian, homeless, hungry and war-ravaged refugees, because those stories are never shown on the nightly news. Making the connections will not be good for the Myth.

Both hard-to-look-at images are of children who are doomed to die and suffer prematurely for America’s delusional Myth. The parents of either child are, or soon will be, suffering emotionally, right along with their child. And America’s wealthy elites are, not as indirectly as you might think, profiting from the sufferings of both children – not to mention the highly profitable domestic and military agendas that are behind both tragedies.

I end with a very short list of some of the boycott-worthy corporations (that probably have very happy shareholders). Included in the list are such corporate culprits as Coca-Cola, PepsiCo, McDonalds, Burger King, WalMart, Goldman Sachs, Morgan Stanley, JPMorgan Chase, Dow Chemical, Monsanto, Syngenta, Lockheed-Martin, Northrup-Grumman, Pfizer, Novartis, Merck, Lilly, Exxon-Mobil, Royal Dutch Shell, British Petroleum, Halliburton, Deepwater Horizons, Rio Tinto, Glencore and the thousands of other inhumane and non-human, exploitive and extractive companies of their ilk, all of which are knowingly polluting the planet and raking in the profits.

This sample list of corporations are representative of the paymasters of almost every known multi-millionaire Republican presidential candidate that I can think of (plus a few Democrats [but no Greens]). It shouldn’t be hard to imagine that every one of those corporations are eagerly supportive of the GOP’s pro-corporate, anti-environment, anti-worker, union-busting, pro-pollution political platform that keeps wages and expenses low and profits high.

The survival of the planet and of our democracy demands that their agendas be resisted.

Dr Kohls is a retired physician who practiced holistic, non-drug, mental health care for the last decade of his family practice career. He now writes a weekly column for the Reader Weekly, an alternative newsweekly published in Duluth, Minnesota, USA. Many of Dr Kohls’ columns are archived at http://duluthreader.com/articles/categories/200_Duty_to_Warn.

Anticopyright: Editorials and articles originated on TMS may be freely reprinted, disseminated, translated and used as background material, provided an acknowledgement and link to the source, TMS: Debunking the Myth of American Exceptionalism, is included. Thank you.