The Supreme Court determined that Canada is an appropriate jurisdiction and victims of contamination can seek compensation from the oil company. 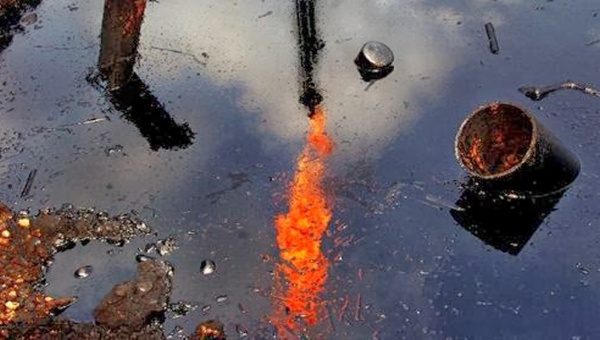 Chevron set fire to over 800 pools of petroleum that they had in Ecuador, causing air pollution. | Photo: noticiasambientales

4 Sep 2015 – The Canadian Supreme Court, in a unanimous 7-0 ruling, determined Friday that victims of the contamination caused by the Chevron oil company in Ecuador can seek compensation from Chevron in Canada.

In 2011, an Ecuadorean court found Chevron responsible for environmental contamination in the Ecuadorean Amazon and ordered the company to pay billions in compensation. A 2013 ruling by the Ecuadorean Supreme Court affirmed the lower court’s ruling and set the compensation at US$9.5 billion.

However, Chevron has refused to pay and as a result the plaintiffs were forced to try to enforce the ruling by seeking the seizure of Chevron’s assets in Canada.

Friday’s decision by the Supreme Court affirms that Canada is an appropriate jurisdiction for the case.

“A finding of jurisdiction does nothing more than afford the plaintiffs the opportunity to seek recognition and enforcement of the Ecuadorian judgment,” wrote Justice Clement Gasconon on behalf of the court.

According to a press release issued by the plaintiffs, Chevron has assets worth an estimated US$15 billion in Canada and produces an estimated US$2 billion to US$3 billion annually in profits.

The case will now will proceed in a lower court.

The plaintiffs are indigenous Ecuadorean people from the Lago Agrio region. Contamination caused by the oil company in that part of the Amazon is estimated to involve over 80 times the amount of oil spilled in the infamous 2010 BP Gulf of Mexico oil disaster.

“This ruling shows that the most vulnerable, the poor, ordinary people also have rights, they also exist and they can now get justice,” Santiago Escobar, an Ecuadorean citizen who helped expose Chevron’s alleged attempts at defrauding the Ecuadorean justice system, told teleSUR.

“Chevron operates throughout the world, extracting oil, making lots of money and then leaving the country without any liability. This ruling will set a precedent in the world and give hope to people and communities struggling against irresponsible corporations worldwide.”

Pablo Fajardo, the lawyer representing victims in Ecuador, responded on his Twitter account, saying, “The Supreme Court of Canada, unanimously delivers a forceful judgment against Chevron. We continue with more strength than ever.”

Texaco, acquired by Chevron in 2001, conducted oil extraction in the Ecuadorean Amazon from 1964 to 1990, and dumped over 16 billion gallons of oil and toxic waste as a cost-saving measure.

There are 30,000 plaintiffs currently involved in the lawsuit against Chevron. The campaign against the oil company has drawn support from a wide-array of people, including famed human rights defender and Nobel laureate Rigoberta Menchu, as well as other indigenous peoples throughout the continent.