Europe’s Refugee Crisis Was Made in America

Washington helped create the conditions with its wars in Iraq and Afghanistan. 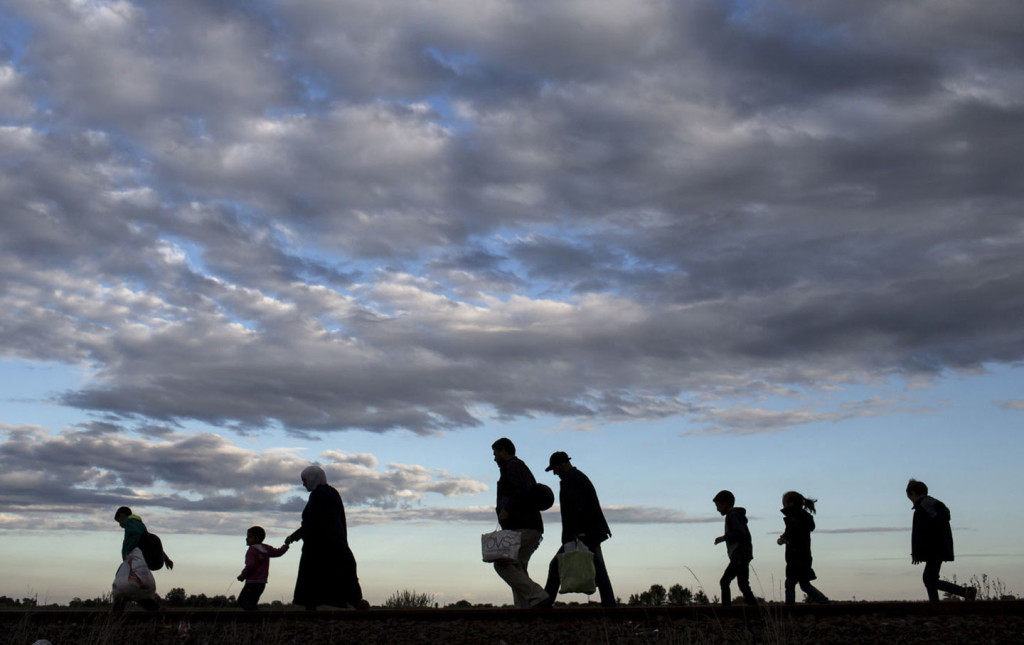 Migrants walk to a collection point in the village of Roszke, Hungary, September 6, 2015, after crossing the border from Serbia. (Marko Djurica / Reuters)

All over Europe and the Mediterranean world, barriers are being breached: the natural and man-made barriers used by nation-states to shut out unwanted travelers; the barriers of fear and grief that keep people from fleeing war or poverty until they have no choice; the barriers of indifference that enable  the rest of us to get on with our lives as if those men, women, and children were no concern of ours. More than 380,000 people have crossed the Mediterranean this year in search of safety, two-thirds of them landing in Greece; at least 2,850 have drowned or are missing at sea. Syrians, Iraqis, Afghans, and others walk for days in the heat, sleep rough on docks or station platforms or by the side of the road, are tear-gassed and beaten at borders and crammed into trains like cattle as they try to make their way north.

The numbers keep on growing, but for those on the edge of Europe struggling with their own troubles, the story is not new. The authorities are overwhelmed, as are the solidarity networks that offer food and water, shelter and medical care. On a continent that seemed divided between north and south by the financial crisis, the refugee crisis has revealed a different rift: between thousands of ordinary citizens, from Greece to Germany to Britain, ready to share their bread and open up their homes, and governments determined to fortify their borders and protect their power, backed by both the anxious and the frankly xenophobic.

It’s taken clashes in Greece and on the Macedonian border, the death of 71 people in a truck in Austria, and public horror at those photographs of 3-year-old Alan Kurdi, small and limp as a rag doll in a Turkish officer’s hands, to prick the European Union into a belated and inadequate response. Germany has taken the lead, opening its borders to Syrians, suspending the iniquitous Dublin III regulation that requires refugees to apply for asylum in the first European Union country they enter, and supporting as a first step a plan to settle at least 160,000 Syrians in EU member states. Germany, said Vice Chancellor Sigmar Gabriel, could accept half a million refugees a year “for several years.” But Hungary, Poland, and Denmark will have none of it. Britain (which funds refugee camps in the Middle East) has offered to take a mere 20,000 people directly from the region in the next five years. The suffering and chaos that result from the failure to act nourish the far right—as well as homegrown jihadis—more effectively than a program of integration ever would.

But this is not a problem for Europe to solve alone. The Syrian civil war has displaced more than 4 million people, most of them to other countries in the region—though conspicuously not to the Persian Gulf states or Saudi Arabia, friend to the West and armorer of Islamist fighters in Syria. The rise of the Islamic State, or ISIS—now terrorizing Syria and Iraq and threatening neighboring countries—was sparked by the aftermath of the Iraq invasion and further fueled by the misguided tactics of the United States and Britain in Syria. Yet the United States has accepted just 1,500 Syrian refugees since the civil war began. Of the 22 presidential candidates, only Martin O’Malley has called for an increase in numbers, up to 65,000. Neither Hillary Clinton nor Bernie Sanders has responded to requests from the UK-based newspaper The Guardian to comment on the issue.

Meanwhile, the people keep coming, and will continue to risk their lives to come. The Syrians entering Europe now are fleeing war, not poverty, but anyone who has spent time among refugees and migrants knows that these forms of violence often go hand in hand. Two billion people live on less than $1.25 a day. The barrier that once protected the rich world from the poor has been crumbling for years, undermined by globalization and the information revolution. No amount of barbed wire or steel can stand it up again.