You may not know the exact title of the song, but chances are you have heard its melody.

In the age of the Internet, the worldwide allure of the song is undeniable. The translated version with French subtitles on YouTube has been watched more than 40,000 times, the Spanish version at least 60,000 times and the Portuguese version 18,000 times. Additionally, thousands of covers of the anthem are currently shared on various social media platforms.

The appeal is even more pronounced within Africa. One of the most viewed non-South African renditions is a cover by the Kenyan Boys Choir. A choir in Cotonou, Benin, and a Congolese church choir have made it part of their repertoires as well.

As an epitome of the diverse African crowd that are seemingly irresistibly drawn to it, the following video is a tribute to Nelson Mandela with the original Xhosa and Zulu lyrics and their English subtitles. The maker of the video ? Heri Rakotomalala,  a web developer from Madagascar based in Canada. (The video has been seen 27,000 times since December 2013):

So what makes this anthem so appealing across the African continent? The harmonious chorus certainly plays a role, as does the uniting message. Both notions are expressed with force when large crowds sing in unison, like at the Ladysmith Black Mambazo concert in the mid-1980s, featuring Miriam Makeba and Paul Simon: 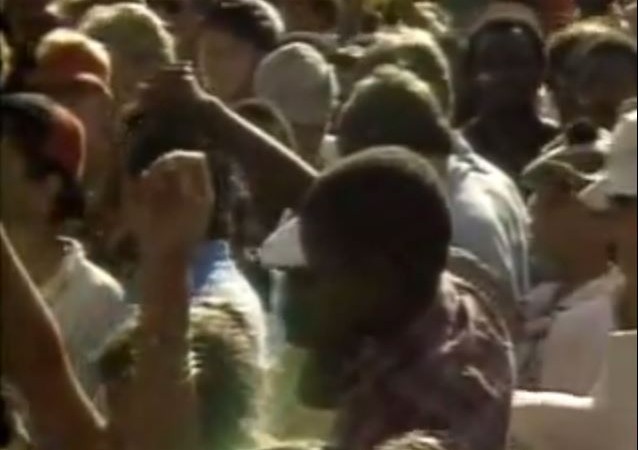 Screen capture of Lady Smith Black Mambazo concert where the anthem was sung by the crowd.

But those are not the reasons that attract more than 1.2 million viewers to the song. As often is the case, it all comes back to the its historical context. The song has long been linked to African anti-colonial movements. It has been a staple of the African National Congress (ANC) in South Africa and was often sung at meetings during the global anti-apartheid movement of the 1970s and 1980s. Bennetta Jules-Rosette and David B. Coplan, scholars at Wits University in Johannesburg, argues that it is Nkosi Sikelel’ iAfrika’s appeal to our emotional core as humans that makes it universal:

Nkosi Sikelel’ iAfrika” (“God Bless Africa”), known as the African anthem, is a powerful signifier for mourning, redemption, and celebration. In the religious versions, the text emphasizes mourning for Africa’s past and a prayer for redemption through Jesus and the Holy Spirit. The secular versions eliminate the reference to Jesus and focus on the spiritual inspiration and uplift needed by Africa’s leaders. Africa metonymically occupies the space of a departed ancestor, living in a timeless eternity while waiting for redemption. The political song transforms this timeless eternity into an active present and an opportunity for future progress.

The origin of the anthem is as fascinating as the social meaning it took on later. The song was composed as a hymn in 1897 by Enoch Sontonga, a Xhosa clergyman at a Methodist mission school near Johannesburg, South Africa. Siemon Allen, a blogger at the Flat International South African Audio Archive Blog, narrates the history of the record:

Sontonga was a gifted song writer who composed tunes for his students to use at public events. The African National Congress eventually adopted Nkosi Sikelel’ iAfrika as their official anthem in 1925. With the adoption of the hymn by the ANC as its official anthem, the song was sung at many official events. But it could also be heard at most gatherings of protest and subsequently became a rallying cry and symbol of resistance. The role of the hymn in this way shifted from a religious to a political context.

The song is popular not only on the the African continent. This Slovenian version (arrangement by Tomaž Kozlevčar) has attracted 120,000 viewers.

Tomaž Kozlevčar explains why he felt compelled to produce the video in a message to South Africans everywhere:

Dear South African friends, honouring the big and immeasurably important steps you and your compatriots have taken in the last decades towards finding the great strength of ethnic and cultural diversity of your beautiful country, we – Perpetuum Jazzile vocal group, where tolerance and multiculturalism stand at the forefront of everything we do – would like to say a big thank you for all your humanity, wisdom, and courage, which blended into one of the brightest contributions to the history of mankind, let alone its future. Moreover, we would kindly ask you to accept a brand new rendition of your beloved Nkosi Sikelel’ iAfrica as our gift of gratitude to you! Finding rhythmic pulse and rich harmonies using our vocals only, we hope the song, created in our homeland of Slovenia, finds a special and harmonious place in your hearts for many years to come.

A French choir in Lyon also took a stab at the anthem:

The producer of the video, Christian Jusselme, is a professor of music at the college Marie Laurencin and Rene Cassin High School Tarare (Rhone). He created a gospel choir in the high school at the demand of his students that specializes in negro spirituals, gospel, soul music and world music.

In the United States, The Princeton University Glee Club also paid homage to Nelson Mandela following his death with a stirring rendition of the anthem:

A now lesser-known song, Special AKA, probably achieved more for social progress against apartheid than Nkosi Sikelel’ iAfrika. But the fact remains that Nkosi Sikelel’ iAfrika echoes at the strings of the heart of Africans and non-Africans like no other songs can. Enoch Sontonga died in 1905 in relative anonymity but his masterpiece lives on in the heart of a whole continent centuries later.

Lova Rakotomalala – Currently the editor of the Francophone region for Global Voices, I am a researcher in biomedical engineering and consultant in Global Health. I am currently attending the Woodrow Wilson School of International Affairs and Public Policy at Princeton U. I am also part of the core team of the Foko , an NGO driven to promote the online exposure of social grassroots projects based in Madagascar. I can also be found at twitter.com/lrakoto and on my personal blog.