1 Sep 2015 – A new report published by the United Nations Conference on Trade and Development on assistance to the Palestinian people warns that the Gaza Strip could become “uninhabitable” by 2020 if current economic trends persist. 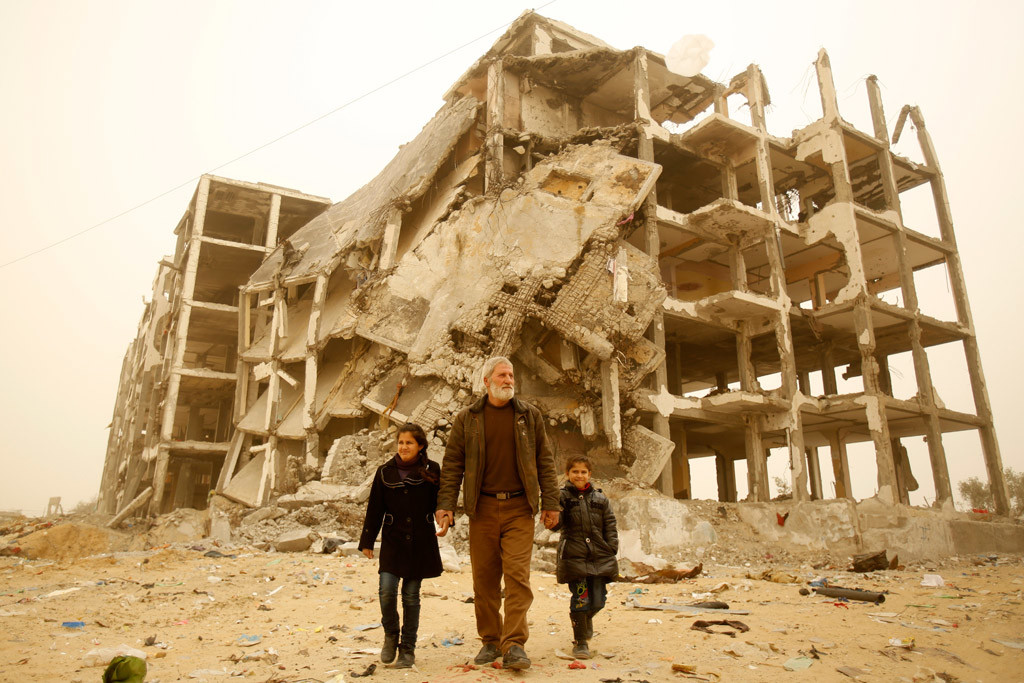 A man holds the hands of his granddaughters near the remnants of the residential towers where the girls used to live, in the city of Beit Lahia, in the northern Gaza Strip. Photo: UNICEF/Eyad El Baba

In addition to eight years of economic blockade, over the past six years, Gaza has endured three military operations that have shattered its ability to export and produce for the domestic market, ravaged its already debilitated infrastructure, and left no time for reconstruction and economic recovery.

According to UNCTAD, conflict has accelerated the “de-development” of the Occupied Palestinian Territory, a process by which development is not merely hindered but reversed.

The report highlights the severe crises in Gaza related to water and electricity, as well as the destruction of vital infrastructure during the military operations in July and August 2014. For example, it finds that Gaza’s 1.8 million inhabitants rely on coastal aquifers as their main source of freshwater, yet 95 per cent of this water is not safe to drink.

In addition to the 500,000 people who have been displaced in Gaza as a result of the most recent military operation, the report estimates significant economic losses, including the destruction or severe damage of more than 20,000 Palestinian homes, 148 schools and 15 hospitals.

The UN estimates that in 2014, unemployment in Gaza reached 44 per cent, the highest level on record. UNCTAD describes the economic well-being of Palestinians living in Gaza as being worse today than two decades ago.

In fact, the report shows that with negative economic growth of minus 0.4 per cent last year, the economy of the Occupied Palestinian Territory witnessed its first recession since 2006 and a fall in income per capita for the second year in a row. The deteriorating situation is reportedly due almost entirely to a range of “discriminatory” economic policies imposed on it.

These include Israel withholding almost $700 million of Palestinian clearance revenue, which comes from taxes on imports into the Occupied Palestinian Territory, compounding a fiscal crisis for the Palestinian National Authority, on whose behalf Israel collects the revenues.

Finally, UNCTAD is warning that donor support remains a necessary but insufficient condition for Gaza’s recovery and reconstruction. Short of ending the blockade, it said donor aid will remain vitally important but will not reverse the ongoing de-development and impoverishment in Gaza.