Only a small percentage of Iran and America’s population has ever met face to face. Almost none of both countries citizens under the age of 35 have ever engaged in long, often fascinating and passionate conversations.  Perhaps an exception being Expats who left Iran decades ago for various reasons and have taken US citizenship.

This partially accounts for the eagerness witnessed in Iran these days by Americans who meet with Iranian students with their seemingly limitless energy and who like to spend hours discussing dozens of subjects after quickly shedding a fair bit of their society’s social decorum.

Other visitors to Iran have commented on the ‘instinctive connections’ foreigners, not just Americans experience as they discover that Iranians have little in common with some Western orientalist notions of what they are supposed to be like.

Students in Iran are very open to sharing their views on everything from countless political and religious subjects to how to apply to American universities for grad school. During visits to Iran it is rare for this observer to meet with students (my favorite Iranians!) not to be asked about student exchange programs and how to obtain an American student visa so they can internationalize their higher education. The same questions are common across Syria and in Lebanon’s Palestinian camps. 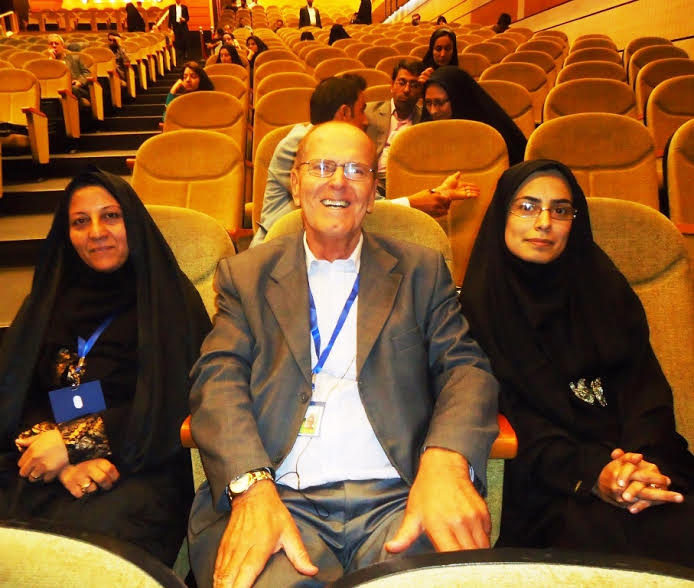 Before the 1979 Iranian Revolution and the 444-day American hostage crisis there were some 52,000 Americans studying in Iran.  The number dropped to approximately 1,600 during the 1980-1990’s and as recently as 24 months ago there were precisely two. As of yesterday there are five Americans studying in Iran perhaps an early sign of a thaw from the recent nuclear agreement.

We have all heard about the excitement from international business and banking interest’s eager to engage across the broad once sanctions are lifted per the Joint Comprehensive Plan of Action (JCPA) agreement and the unfreezing of tens of billions of dollars of Iranian assets held in overseas banks under EU and US sanctions. This observer is consistently amazed chatting with Iranians who are much better informed than he is about many details of this subject.

Three young lady students from different parts of Iran, studying at Shahid Beheshti University, which offers more than 70 programs at Master’s and over 30 at Ph.D. levels, delivered an animated 30 minute short course to their rapt new American friend on how they see the near-term sanctions reality.

They explained that they, along with most Iranians they know are currently holding back on their spending waiting for price drops and the arrival of better quality imported goods.  This despite the fact that President Hassan Rouhani’s administration over the past two years has managed to cut inflation from approximately 40 per cent to 12.6 per cent ending three successive years of economic contraction, with a 3 per cent growth rate.  They authoritatively explained that any real dividends from the nuclear deal for average Iranians will take many months to materialize, and Iran’s economy is still experiencing stagnation and that oil prices have added to the strain by a halving of oil revenues, the country’s economic lifeblood.

Iranians believe that some trade between Iran and the west will no doubt occur in the coming months. Economists tend to agree. But it won’t amount to much anytime soon if AIPAC and its partner, the US Department of the Treasury’s Office of Financial Assets Control (OFAC) succeed in their continuing their anti-Iran campaign which has been revered up since this summer’s Congressional vote in favor JCPA.

AIPAC, sent a letter to Congress right after the vote laying out its new anti-Iran campaign which included Israeli agents, the Washington Institute for Near East Policy  (WINEP) and its “Counselor” Dennis Ross, criticizing President Obama and urging him to transfer to Israel the “mountain-busting”  30,000 pound Massive Ordnance Penetrator (MOP) for use against Iran when needed. The MOP is the world’s largest nonnuclear weapon and designed to destroy hardened targets, bunkers, and locations deep underground. The MOP hits the ground at supersonic speed after being released from a B-2 bomber.

Since Israel does not have the B-2. AIPAC is seeking pledges from agents in Congress and from Presidential candidates that the new administration will provide both to Israel. Five Republican candidates including aides to Mike Huckabee and Senator Lindsay Graham have assured AIPAC that they see “no problem” with Israel’s request.

Also engaged in keeping the pressure on Iranians is Adam Szubin, AIPAC supporter and former director of Treasury’s Office of Foreign Assets Control (OFAC) which enforces sanctions.  Mr. Szubin has recently been appointed the U.S. Treasury’s acting Under Secretary for Terrorism and Financial Intelligence. He has made plain this past month that pressure on Iran will intensify and those who fantasize about doing business with the Islamic Republic, with or without sanctions, will face more hurdles. The latter includes for example, that any foreign banks who knowingly or unknowingly engage in and transaction with any firm doing any business with Khatam al-Anbia (the Iranian construction company owned by the Islamic Revolutionary Guards Corps, or IRGC), they will be barred from U.S. markets.

OFAC and AIPAC have publicly pledged to combat “all of Iran’s other malign activities outside the agreement.”  “They will find themselves back onto the list, and the Iranians I believe understand that,” Szubin stated this past week.

He added, “We do not take the release of one dollar of sanctions lightly. We are committed to countering Iran’s ongoing illicit conduct and will aggressively enforce sanctions that target Iran’s support for terrorist groups, its abuses of human rights or its destabilizing activities in the region. That is why we are intensifying our work alongside Israel to continue to disrupt the front companies, intermediaries and money launderers that enable terrorist organizations such as Hezbollah and Iran’s IRGC Qods Force.”

While the  full-speed-ahead campaign to tighten sanctions in Washington accelerates, little to date have been done toward lessening medical and  quality of life sanctions for either the people of Iran or Syria. As in widely commented upon by medical personnel in both countries, while the US-led sanctions are claimed by OFAC/AIPAC and some in Congress to be ‘truly humanitarian’ because medicines are exempt, the reality is that vital medical supplies are not entering either country because businesses in the west do not want risk huge OFAC fines or being barred from US markets as their lawyers try to understand the murky OFAC regs.

This has contributed to some absurd discussions and lack of common sense actions by OFAC .For example, OFAC has issued a list of medical devices and items that are eligible to be exported to Iran and Syria otherwise sanctioned under a general license. Both countries, but especially Syria, need medicine and medical equipment badly.  There has been plenty of criticism from health workers and medical NGO’s working on the ground  in both countries because of what appears to be arbitrary omissions of necessary and common medical items that should be eligible for import.

One recent example was last week’s discussion of this subject at the President’s Export Council Subcommittee on Export Administration when Kathleen Palma, GE’s senior counsel for international trade explained to OFAC:

“I would note that any kind of condom is on the (exempted) list, even though they tend not to be part of either countries culture, but baby warmers and units for neonatal intensive care are not on the list and hence banned.”

OFAC’s representative assured the lady and the public that after a decade of sanctions, the agency was in the process of reviewing proposals to add more medical items to the exempted list. No time frame was indicated.

Meanwhile, AIPAC is arranging for a new version of a 2012 Federal Law (H.R. 1905) to be submitted to Congress. The new version will exclude Iranian students from being able to receive a U.S. student visa to study in America if the student is seeking to participate in higher education in preparation for a career in Iran’s petroleum, natural gas, nuclear energy, nuclear science, or any related nuclear engineering fields.”

The Zionist lobby, having suffered a rare defeat in Congress recently blames Iran lovers and Israel haters and will seek to keep Americans from getting to know Iranians and that includes students.  The lobby fears that when the Iranian and American public associated, they will quite likely become valued friends and this is anathema for the regime still occupying Palestine.

America loses if AIPAC/OFAC succeeds and forces retention of the US sanctions that are similar to some kinds of terrorism according to some international lawyers because they target civilian populations for political purposes including regime change.

Every American visitor to Iran, one imagines, quickly comes to realize not just how much Americans have in common with Iranians which is a whole lot. But how beneath the thin skin of political rhetoric occasionally from both people’s leaders we can achieve a special relationship based on shared values and mutual respect.

This will be to the profound benefit of both peoples.

Anticopyright: Editorials and articles originated on TMS may be freely reprinted, disseminated, translated and used as background material, provided an acknowledgement and link to the source, TMS: How AIPAC-OFAC Are Working to Maintain Sanctions Targeting Iran and Her Students, is included. Thank you.