It’s Not the Chinese Economy That’s on Life Support

Western markets are only panicking about China because their own economies are so fragile. 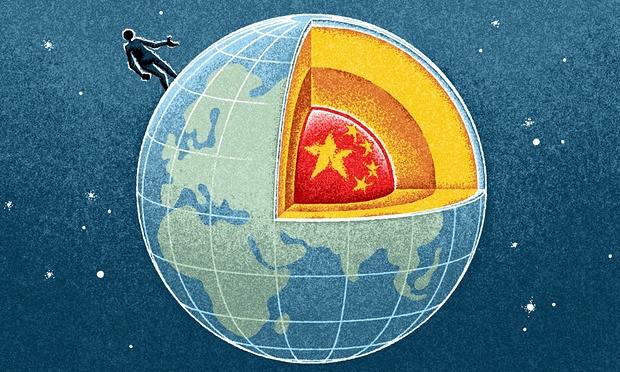 14 Sep 2015 – The west’s bears have always well outnumbered the bulls when it comes to the Chinese economy. A new problem is all too often seen as an intimation of impending crisis, a hard landing, consequent social instability, and perhaps the eventual collapse of the regime. Dream on.

The bears, it goes without saying, have a dreadful record. After 35 years of extraordinary economic growth, China is still growing at 7% annually. True, that is lower than before, but still at a rate that dwarfs anything in the west.

One of the great weaknesses of so much western economic commentary is that it fails to look much beyond the next quarter’s, or even month’s, results. In contrast the Chinese understand where they have come from, where they are and where they need to go. Nor are they complacent: the Chinese leadership readily admits it faces quite new economic challenges.

It is instructive then to look at China’s global role since the financial crisis. When the western economies were on their knees in 2007-08, the Chinese economy rode to the rescue. Although the actions of the Beijing government were primarily motivated by self-interest – avoiding being dragged down by the crisis – they also had the effect of saving the western economies from a fate far worse.

Confronted by the near-collapse of their western markets,, which accounted for around half of Chinese exports at the time, China embarked on a huge $586bn stimulus programme to boost domestic demand and offset the loss in demand for their exports. It worked. The Chinese growth rate continued to expand at around 10% and thereby provided a major boost to the global economy.

Furthermore, following those dark days, the Chinese have allowed their currency, the renminbi, to steadily appreciate, by more than 25% against the dollar since 2005 and considerably more against most other currencies. As a result Chinese exports have become considerably less competitive and have fallen. Meanwhile its current account surplus has dropped dramatically, from 10.1% of GDP in 2007 to 2.1% last year. Imagine the effect on other economies if the opposite had happened and the renminbi had been devalued by 25%.

The growing importance of the Chinese economy for the health of the global economy is illustrated by the fact that America’s GDP has grown by just over 10% since 2008, while over the same period China’s has increased by about 66%.

That said, the Chinese readily accept that the stimulus programme has led to a multitude of acute problems: chronic over-investment in industries responsible for infrastructure, excessive debt, a property market overhang and growing financial problems in local government.

They are also deeply aware that the stimulus has served to delay the most urgent economic challenge of all: a structural shift in the Chinese economy. As a result, Beijing has found itself fighting on two very different fronts at the same time: the severe short-term problems posed by the stimulus programme and the long-term imperative of a structural shift.

The rebalancing of the Chinese economy is making surprisingly rapid progress. In 2014, the share of services in China’s GDP was 48.2%, comfortably ahead of the 42.6% accounted for by manufacturing and construction, with the gap steadily widening. Despite the fall in the growth rate to around 7%, employment has remained buoyant: the reason is that the service sector absorbs relatively more people than manufacturing, since it is more labour-intensive, together with the fact that the working-age population is declining annually by 3 million.

There is also now much evidence that the Chinese economy is becoming increasingly innovative. Online shopping, led by Alibaba, already accounts for more than 10% of retail sales and is growing at 40% per annum. China’s express delivery and internet financial services are world-class and in sectors such as advanced machinery equipment, electrical machinery and smartphones Chinese firms are rapidly catching up with the global leaders: Xiaomi, for instance, is now selling more smartphones in China than Apple. Nor should we ignore China’s energy revolution: wind, water and solar power now account for nearly a third of its total electricity generation capacity, a remarkable achievement.

The western preoccupation with headline GDP figures overlooks this deeper structural shift. Ultimately it is the ability of the Chinese economy to make the transition from a labour-intensive, investment-led, export-oriented economy to one based on value-added production and domestic consumption that will be crucial to its long-term future.

This, however, should not deflect attention from the short-term risks. China’s chronic debt problem – partly corporate (especially in infrastructural-related industries, such as steel, that have 30-40% excess capacity); partly property (the result of an explosion in construction, with many buildings remaining empty); partly financial (the growing inability of borrowers to pay back their debts, especially in the shadow banking sector) – could lead to a massive deleveraging and consequent economic contraction.

One of the great problems facing the Chinese leadership is that it is facing several serious challenges all at the same time. If it backtracks on restructuring and rebalancing to provide short-term economic stimulus and shore up the growth rate, this will only store up much more serious problems for the future. If it mishandles the debt problem China could conceivably have the hard landing that it has so skilfully avoided over the last few decades. In short, the new Chinese leadership is confronted with serious overload. Add to this China’s enormously ambitious infrastructure project, One Belt One Road, America’s blatant attempt to contain China and China’s more assertive foreign policy, especially in east Asia, and the danger of over-reach becomes apparent.

China’s leadership, unsurprisingly given the circumstances, has made one serious error: its ill-conceived and mistaken intervention to try to reverse the sell-off on the Shanghai Stock Exchange, from which it now appears to have largely backtracked. In the event, however, it was the resulting plunge in western markets that was far more revealing and significant. Its message was threefold. First, the west is concerned about the state of China’s economy. Second, it was a dramatic illustration of just how important China now is to the global economy, in many ways greater than the US. Even five years ago such an event would have been unimaginable: China has arrived big time. And third, it reminded everyone of the underlying fragility of the western economy, the fact that it has never recovered from the financial crisis, that the latter ushered in a new era of what Larry Summers has called secular stagnation.

The western world continues to depend on a life-support system, namely zero interest rates, combined with Chinese growth. What if the latter falters? That is why western markets have suddenly started panicking. In Beijing there is concern, not panic. Their challenges seem manageable in comparison.

Martin Jacques is the author of When China Rules the World: The End of the Western World and the Birth of a New Global Order.