Tribalism and sectarianism afflict Western societies too. So why do they seem to be tearing the Middle East apart? 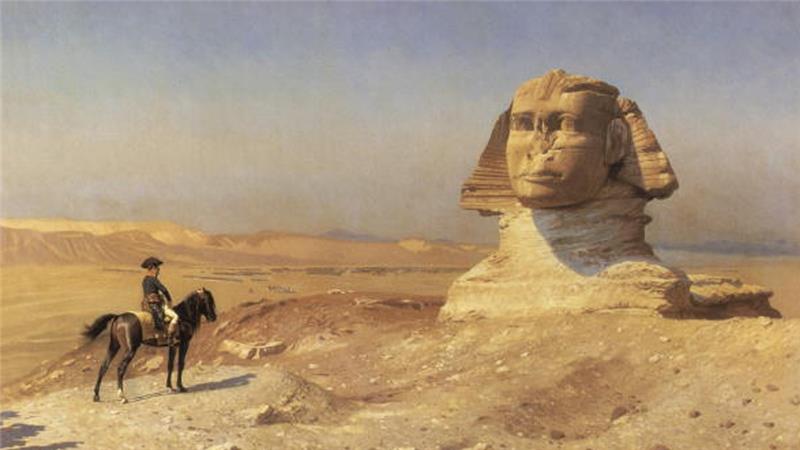 Napoleon Bonaparte at the Sphinx during the Egypt campaign in 1798, painted by Jean Leon Gerome, c 1868 [Getty]

14 Sep 2015 – The disintegration of Iraq, Syria, Yemen, and Libya – and the increasing likelihood of the redrawing of their maps once the dust settles – are widely regarded by the West and the Arab world as a symptom of tribalism and sectarianism that the  imperial powers were unable to contain through the “artificial borders” they imposed.

While it is true that many of the conflicts in the region have taken on a tribal, sectarian, or even religious dimensions – or a combination of the three – they did not start out that way. The idea that centuries-old, Sunni-Shia animosities are behind the violence in, say, Syria or Yemen , are simply self-serving myths and half-truths.

Yet, the media and politicians continue to fixate on this conviction, echoing the late Egyptian diplomat Tahseen Bashir’s infamous quip that: “Egypt is the only nation-state in the Arab world. The rest are just tribes with flags.”

While a number of countries in the region are small enough to qualify as a tribe with a flag, this is not unique to the Arab world. And I’m not just thinking of Africa and other developing societies there.

Despite the Enlightenment era’s focus on individualism and the shining light of reason, the West, after all these centuries, has not shaken off many elements of its traditional tribalism, and new forms of tribalism have also emerged.

As a small example, take Belgium: the country of which I am a naturalised citizen. Not belonging to either of its two main linguistic communities, I have often been baffled by the amount of mutual bitterness and distrust on view.

The quiet conflict between Flemings and Walloons that has been simmering for over a century could easily be framed in “tribal” terms – what is (ethno-)nationalism, after all, except a broader form of tribalism? However, to frame it as so would be to oversimplify an extremely complex situation.

As for “artificial borders”, Europe, like the Middle East, is replete with them. The two world wars were, at least partly, a case of border insanity.

Belgium is a prime example of how fake European frontiers are. Following Napoleon’s defeat at Waterloo in 1815 and the dissolution of the first French empire, what is today Belgium was handed over to the Dutch king, William I.

Like Sunnis in modern-day Iraq, the Protestant minority controlled the state, though all citizens theoretically enjoyed legal equality.

Some 15 years later, as the revolution fomented in neighbouring France, the Catholic majority of the southern Netherlands revolted in what became known as the Belgian Revolution.

How much of it was sectarian and religious, and how much was a reaction to William I’s unlimited (despotic) power and his bulldozer approach to modernisation (imposing modern notions of equality on his traditionalist subjects and stripping the Catholic Church of its centuries-old privileges) is hard to ascertain.

Sectarianism was the apparent driver of the conflict back then. Language is today.

Responding to the uprising, the great European powers agreed to give Belgium its independence, drawing lines in the mud, similar to those they would draw later in the Middle East’s sand. Belgium was destined to serve as a buffer zone (read: regular punching bag) between Germany, France, and the Netherlands.

And faultlines like this abound across Europe. In fact, there isn’t a country in Europe whose borders are not artificial, whose past frontiers do not overlap with those of its neighbours, or whose population is not a messy mix of peoples.

This raises the question of how and why it is that European states manage to keep their tribal undercurrents in check, while the Middle East is apparently being torn asunder by the very same forces.

That’s because it is not. If it were, then Egypt should be – due to its apparently more homogeneous nature and far clearer regional boundaries, not to mention the head-start it got as a modern nation-state – the most stable country in the region.

Tribalism is the symptom, rather than the cause, of the Middle East’s ills. Unlike the generally much older nation-state experiments in Europe, many Arab states have failed and others are on the brink of failure.

This is due to a complex mix of poor governance, corruption, authoritarianism, economic and gender inequality, poverty, under-education, foreign domination, overpopulation, environmental stress, and more. The vacuum left by this enormous, state-shaped black hole has enabled the demons of tribalism and sectarianism to rear their ugly heads.

That does not mean that the West is immune. It is simply cushioned by effective governance, relative prosperity, greater freedom, and the painful memory of the totally destructive power of modern-day tribalism, both between nations and within them.

But there is no room for complacency. Disintegration can come fast, like a chain reaction. Order can quickly descend into disorder, and the most “civilised” can rapidly descend into the most “barbaric”.

Many of the ingredients of that sort of unravelling are already in place, but the secret combination that unleashes mayhem has not yet been mixed in. Early signs of this include the growing “tribalism” within and between European states, including the Greek-German standoff and the rising spectre of far-right nationalism from France to Hungary – not to mention huge levels of youth unemployment, growing hardship, and inequity.

Across the Atlantic, the United States has among the greatest inequalities in the advanced industrialised world, enormous interracial tensions, massive gun crime, mass incarceration, growing class divisions, and longstanding tensions between the north and south that could rapidly erupt given the right catalyst.

While Western societies  today appear robust enough to deal with these challenges, the chance still exists that, with time, the “never again” of yesteryear will become the “not again” of tomorrow. Let’s hope that does not happen.

Khaled Diab is an award-winning Egyptian-Belgian journalist, writer and blogger. He is the author of Intimate Enemies: Living with Israelis and Palestinians in the Holy Land. He blogs at www.chronikler.com.