There’s Nothing Collateral About a Toddler Washed Ashore

The heartbreaking pictures of three-year-old Aylan Kurdhi symbolize everything that is wrong with war. Following #KiyiyaVuranInsanlik (humanity washed ashore) is a painful confrontation with what some might call the collateral damage of war. When we look at the images of this toddler through the tears in our eyes, it is time to deconstruct some myths about war. Aren’t we used to hearing and believing that war is part of human nature, wars are fought for freedom and defense, wars are inevitable, and wars are fought between militaries? These beliefs about war sound really insipid when a toddler is lying face down on a beach, dead, far away from his home where he should have been playing and laughing. 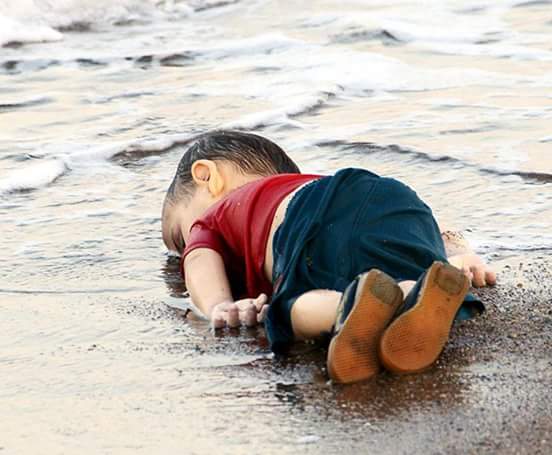 Wars are based on and justified by a series of myths. We are at a point where peace science and advocacy can easily refute all of the justifications made for war.

Did Aylan have to die because wars are a part of human nature? No, war is a social construct, not a biological imperative. In the Seville Statement on Violence, a group of leading behavioral scientists refuted “the notion that organized human violence is biologically determined.” Just as we have the potential to wage wars, we have to potential to live in peace. We always have a choice. In fact, most of the time humanity has been on earth, we have been without war in most places. Some societies have never known war and now we have nations who have known war and left it behind in favor of diplomacy.

Did Aylan have to die because the war in Syria is fought for defense? Certainly not. The war in Syria is an ongoing, complex series of militarized violence that has led to large numbers of casualties. Very broadly speaking, it was rooted in a drought (hint: climate change), lack of jobs, identity politics, raising sectarian tensions, internal oppression by the regime, initially nonviolent protests, promotion by war profiteers, and ultimately the taking up of arms by some groups. Of course, regional and global powers like Saudi Arabia, Turkey, Iran, or the United States have played different roles at different times depending on their interests. The continuing fighting, the constant flow of weapons, and the military projections have nothing to do with defense.

Did Aylan have to die because war is the last resort? A recent study shows that people assume and expect that decisions to use force are made when no other options exist. However, no war can satisfy the condition of absolute last resort. There are always many better and more effective nonviolent alternatives. Are they perfect? No. Are they preferable? Yes. Some immediate alternatives in Syria are an arms embargo, support for Syrian civil society, the pursuit of meaningful diplomacy, economic sanctions on ISIS and its supporters, and a humanitarian nonviolent intervention. More long-term steps include withdrawal of U.S. troops, an end of oil imports from the region, and dissolution of terrorism at its roots. War and violence will continue to lead to more civilian casualties and further escalation of the refugee crisis.

Was Aylan collateral damage in a war fought between armies? To be clear, sanitizing the idea of something like the unintentional death of innocents in warfare with the technical term collateral damage was rightfully labeled an “anti-term” by the German news magazine Der Spiegel. Peace advocate Kathy Kelly has experienced many war zones and reflected that “the havoc wreaked upon civilians is unparalleled, intended and unmitigated.” There is an increasing amount of evidence demonstrating that modern warfare kills far more civilians than soldiers. This becomes especially true if we get rid of notions like “surgical” and “clean” warfare and examine the direct and indirect deaths resulting from the destruction of infrastructure, diseases, malnutrition, lawlessness, victims of rape, or internally displaced people and refugees. Sadly, we now have to add the category of children washed ashore.

Of course, there are those who say that overall the world is becoming a better place. Scholars like Steven Pinker and Joshua Goldstein are known for their respective work identifying the decline of warfare. In fact, I am among those who are inspired by the idea of an evolving Global Peace System where humanity is on a positive path of social change, constructive conflict transformation, and global collaboration. Like Pinker and Goldstein, I’ve always insisted that we must not mistake such global trends for a call to complacency with the state of the world. On the contrary, we must tirelessly work to strengthen the positive trends that weaken the war system. Only then will we have a chance to avoid tragedies like that of Aylan lying face down on a beach in Turkey. Only then will my two and a half-year-old son have a chance to meet and play with a boy like Aylan. They would have made great friends. They wouldn’t have known how to hate each other. That only happens if we teach them how to.

Patrick. T. Hiller, Ph.D. is the Director of the War Prevention Initiative of the Jubitz Family Foundation and syndicated by PeaceVoice. He is a Conflict Transformation scholar, professor, on the Governing Council of the International Peace Research Association, on the Coordinating Committee of World Beyond War, and a member of the Peace and Security Funders Group.

Anticopyright: Editorials and articles originated on TMS may be freely reprinted, disseminated, translated and used as background material, provided an acknowledgement and link to the source, TMS: There’s Nothing Collateral About a Toddler Washed Ashore, is included. Thank you.