The establishment of an independent climate tribunal to hold wealthy nations accountable emerged as a central goal of conference in Bolivia. 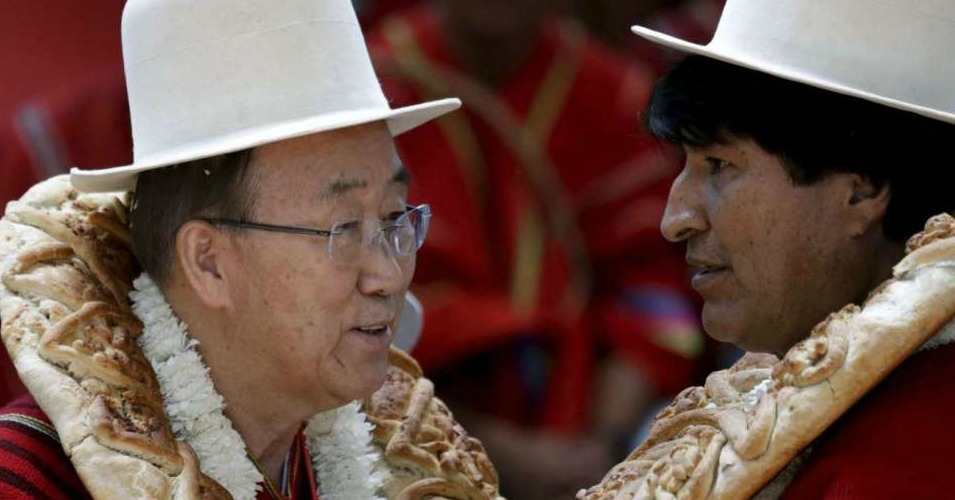 “Caring for Mother Earth is a moral issue,” UN Secretary-General Ban ki-Moon (left) told the World People’s Conference on Saturday. “We must change how we use Mother Earth’s resources, and live in a manner that is sustainable.” Here, he is pictured with Bolivian President Evo Morales. (Photo: Reuters)

12 Oct 2015 – Decrying capitalism as a “threat to life,” an estimated 7,000 environmentalists, farmers, and Indigenous activists from 40 countries convened in the Bolivian town of Tiquipaya for this weekend’s World People’s Conference on Climate Change, aiming to elevate the demands of social movements and developing countries in the lead-up to upcoming United Nations-led climate talks.

“Capitalism is Mother Earth’s cancer,” Bolivian President Evo Morales told the crowd, which also heard over the course of the three-day conference from United Nations Secretary-General Ban ki-Moon as well as other Latin American leaders.

The people’s summit, which concluded Monday afternoon, produced a 12-point declaration (Castellano) that will be presented during the COP21 climate negotiations taking place November 30-December 11 in Paris, France, during which 200 countries will attempt to cement an agreement to curb global warming. The COP21 agenda has been criticized for its sidestepping of issues like the role of capitalism in climate change and for the robust involvement of multinational corporations in the talks.

According to a translation, the Declaración de Tiquipaya calls for, among other things:

“We demand that the Paris Agreement does address the structural causes of capitalism,” the declaration reads. “It does not have to be an agreement that reinforces the capitalist model, through more market mechanisms, allowing volunteer commitments, encouraging the private sector and strengthening patriarchy and neo-colonialism.”

In advance of the Bolivia summit, the World People’s Conference website elaborated further:

The world is being buffeted by multiple global crisis that manifests itself in a climate, financial, food, energy, institutional, cultural, ethical and spiritual crisis. These are the manifestations of unbridled consumerism and a model of society where the human being claims to be superior to Mother Earth… It is a system characterized by the domination of the economy by gigantic transnational corporations whose targets are the accumulation of power and benefits, and for which the market values are more important than the lives of human beings and Mother Earth.

Though the establishment of an independent climate tribunal emerged as a central goal of the Bolivian summit, Reuters noted on Monday that the idea “is a non-starter with almost every other country going to the Paris talks.”

Even the European Union, which as recently as December argued for a strong, legally binding deal, “is increasingly talking about a’ pledge and review’ system,” Reuters wrote, “under which national commitments would be re-assessed every five years against a goal of halving world emissions by 2050.”

As for Bolivia, teleSUR reports: “The South American nation has taken it upon itself to advocate for climate change issues on behalf of other developing nations,” with environmental activist Moira Zuazo telling the publication that “70 percent of the Bolivian people say that development is less important than Mother Earth and we are listening to them.”