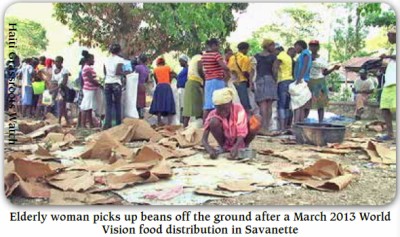 21 Oct 2015 – On October 14, the United Nations Security Council voted unanimously to extend the mandate of its occupying force in Haiti by one year, until October 15, 2016. The force, for which the French acronym is MINUSTAH, will continue at the current troop levels of up to 2,370 soldiers and 2,061 police.

While these numbers are significantly reduced from 2010—when MINUSTAH had nearly 9,000 soldiers and 3,700 police—the reduction and the possibility of withdrawal next year are contingent on the ability of the Haitian National Police (PNH) to take on the job of suppressing the population. The UN expects the PNH to have at least 15,000 “fully operational serving police officers” by 2016, and Haiti’s Ambassador to the UN promised the Security Council that he would make good.

As of August 31, the PNH had a total headcount of 11,900. It is meant to replace not just MINUSTAH, but also the former Haitian military which had acted as a domestic police force. The military was disbanded by Jean-Bertrand Aristide in the 1990s after a series of coups.

This week’s Security Council Resolution 2243 warns at length that “adjustments to the force configuration should be based on the situation on the ground … and should take into account the results of the Secretary General’s strategic assessment, the importance of maintaining a secure and stable environment and the impact of social and political realities on Haiti’s stability and security.”

Similarly, a September 2011 email forwarded to Hillary Clinton by her Chief of Staff, Cheryl Mills, demonstrated the motives of the US and other foreign governments. The email, available in an archive on the web site of the Wall Street Journal, relays the concerns of US State Department Special Coordinator Thomas Adams about a possible withdrawal of 250 Brazilian troops from MINUSTAH. Adams reported that at a meeting with Brazilian officials he had “asked for Brazil to join us and others in pressing the GOH to provide greater support to the HNP buildup and join us and other donors in providing technical assistance in this regard.”

The US and other imperialist governments are concerned not just about the outcome of the elections, however, but also their legitimacy in the eyes of the Haitian people. The first round of legislative elections on August 9 saw a “measly” voter turnout of 18 percent, in the words of the Wall Street Journal. According to a WSJ columnist, “U.S. officialdom is perturbed by the violence and low voter turnout … It’s worried that Haitians again will stay home on presidential election day.”

Bigger worries than elections are also troubling the imperialist politicians. The UN Secretary-General’s semi-annual report on Haiti for the period ending August 31, 2015 counted 399 public protests between March and August, up from 215 in the preceding 6-month period and 117 in the period before that. Demonstrating how closely the protests are being monitored, the report breaks them down into size categories and the percentage of total protests in each category.

The Secretary-General’s report to the Security Council also gives details on the operations of MINUSTAH and the PNH. MINUSTAH police set up 2,259 checkpoints during the six-month period and carried out 18,774 vehicle patrols. Another 11,257 “routine patrols” were carried out by MINUSTAH soldiers, 836 of them performed jointly with the PNH.

The PNH, having received training and vehicles from MINUSTAH, “executed operations” that included “intelligence, planning, command and execution.” While these raids are presented in the report as a means of “disbanding gangs,” the UN has a history of armed suppression of protests.

In an address to the UN Security Council one week before it voted to extend the MINUSTAH mandate, Haitian Ambassador Denis Régis promised that the government of Michel Martelly would “continue working in strict collaboration with the Security Council and the Secretariat for the full realization of the mandate entrusted in MINUSTAH.”

In addition to “security,” the Security Council Resolution offers up human rights as a pretext for the continued occupation. It “strongly condemns” gang violence against children, the sexual abuse of women and girls, and gender-based violence. Yet MINUSTAH itself has been guilty of these crimes, and, incredibly, the Resolution “requests the Secretary-General to continue to take the necessary measures to ensure full compliance of all MINUSTAH personnel with the United Nations zero-tolerance policy on sexual exploitation and abuse.”

According to a Human Rights Watch report summarizing the events of 2012 in Haiti, at least 60 allegations of sexual abuse had been made against UN forces in the preceding five years. These included a case in which two Pakistani soldiers were court-martialed on a UN base for having raped a 14-year-old boy. Haitian authorities were informed only after the trial.

Cholera was introduced into Haiti in 2010 by MINUSTAH troops from Nepal because of UN negligence. Instead of admitting responsibility—either legal or moral—the UN has hidden behind a mixture of committees, short-term programs, and verbiage about “coordination with other actors to continue to support the Government of Haiti in addressing the structural weaknesses.”

Nonetheless, the Secretary-General’s own report states that from January through July there were 20,509 suspected cases of cholera and 175 deaths in Haiti. Prime Minister Evans Paul and UN Special Representative Sandra Honoré have “reinvigorated the High-level Committee on Cholera,” according to the report, but only 13 percent of the needed funding for an existing national plan had been disbursed as of August 31. The report asks only for “greater donor support.”

The lack of timely donations from imperialist governments has not kept the UN from spending on MINUSTAH. The approved UN budget for the fiscal year ending on June 30 of next year is US $380.4 million. The proposed PNH budget for 2015-2016, which includes the training of an additional 1,500 new officers, is $193.2 million. If the Haitian government were to pay for these security outlays, they would amount to nearly a quarter of its annual budget.