IDF Punish Families of Attackers by Destroying Their Homes 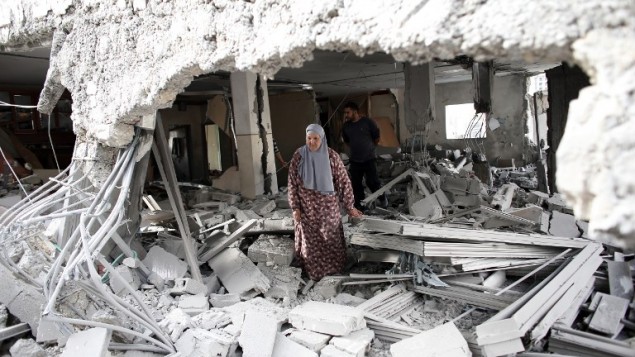 A Palestinian woman walks amid the rubble of a house after Israeli security forces demolished the homes of two Palestinians behind attacks in the Palestinian neighbourhood of Jabal Mukaber in East Jerusalem, on October 6, 2015. Photo by Thomas Coex / AFP

The IDF distributed seven notices to the families of terrorists notifying them of Israel’s intention to demolish their homes shortly.

Israel is fast-tracking the demolition of homes belonging to the families of Palestinians accused of or involved in attacks on Israeli Jews.

These demolitions have long been condemned as illegal collective punishment — a war crime — against civilians under occupation.

The measure is only used by Israel against Palestinians. Even in cases where Israelis are convicted of killing Palestinians — rare though such convictions are given pervasive impunity — their family homes are never demolished.

This step is but one of many draconian measures Israel has taken as part of Netanyahu’s “fight to the death against Palestinian terrorists,” which evolved from the “war” on stone-throwers the prime minister declared a few weeks ago.

The morning after the emergency meeting, Israeli forces blew up the homes of the families of Ghassan Abu Jamal and Muhammad Jaabis, both of whom are dead and suspected of carrying out separate fatal attacks on Israelis late last year. The men had been shot and killed on the spot.

More demolition orders have been recently issued against other Palestinian families. While Israeli legal proceedings were initiated months ago, the orders were issued apparently to appease the Israeli public’s anger after the killings of two Israeli settlers in the occupied West Bank earlier this month and a stabbing in Jerusalem that killed an Israeli soldier and a West Bank settler last week.

Reports indicate the Israeli military may be preparing to demolish the homes of men it accuses of carrying out the killing of the two settlers in the West Bank, even though the men Israel has detained have not received any sort of trial or due process.

Shaked, the justice minister, notorious for her unbridled racism and calls for genocidal violence against Palestinians, has been a vocal critic of Israel’s high court. She views it as too soft on Palestinians. But she will likely find no resistance from the court to accomplish her new assignment.

Last summer, following the abduction and killing of three Israeli youths in the West Bank, Israel revived its practice of demolishing the homes of innocent family members of Palestinians accused of or involved in violent attacks against Israelis.

It had been almost entirely suspended for nine years.

Amnesty International has written to Netanyahu, calling on him to halt the demolitions, saying they are a clear form of collective punishment.

A group of human rights organizations, headed by HaMoked, is urging the Israeli high court to end the practice, arguing that it is a grave violation of international law.

The Fourth Geneva Convention protecting civilians in times of war states that no one living under military occupation “may be punished for an offence he or she has not personally committed.”

It adds that “collective penalties” and “reprisals” against the population and their property are prohibited.

The United Nations Security Council, General Assembly, the International Commitee of the Red Cross and the International Court of Justice in The Hague, among others, have all affirmed repeatedly that Israel’s occupation is governed by the Fourth Geneva Convention. 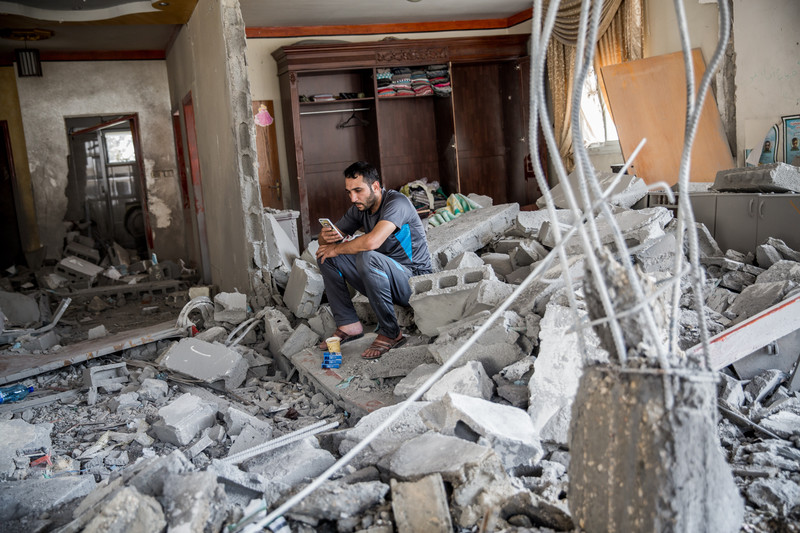 A member of the Abu Jaber family sits in the ruins of the East Jerusalem family home that was demolished by the IDF on 6th October 2015. A member of the family, Ghassan Abu Jaber, killed four worshippers in an attack on a synagogue last year. Photo by Yotam Ronen /ActiveStills

However, far from opposing these revenge tactics against families — including those with young children and elderly people — the Israeli high court has been its most consistent champion.

Indeed, the 2005 suspension came only after a military committee, formed in the face of international condemnation and internal pressure, concluded that punitive demolitions achieved the opposite of deterrence, its ostensible aim.

But the court has backed the military every step of the way as it has repeatedly breached that line. And when Netanyahu moved to reintroduce the practice last year, the court predictably decided in his favor, citing decades of prior rulings in support of home demolitions as a legitimate form of deterrence.

“There is no dispute that [these] decisions would severely injure uninvolved parties, including young children,” the Israeli judges wrote, referring to the military’s decisions to demolish homes. Yet the court ruled that such decisions must be left to the discretion of military commanders.

Since it first ruled on the issue in 1979, the high court has repeatedly approved home demolitions, which were adopted from the repressive emergency regulations introduced by the British during the 1940s.

In 1994, it expanded their use, ruling that the state could demolish the former home of a dead man. And in 1996, the court allowed Israel to extend the practice to houses belonging to Palestinians within present-day Israel.

Aharon Barak, the reputedly liberal Israeli chief justice at the time, ruled that the emergency regulations “remain valid even when they conflict with the provisions of the Basic Law: Human Dignity and Liberty” — the closest document Israel has to a bill of rights. Years later, however, Barak did question his position.

The high court has always been most pliant in meeting the needs of Israeli politicians: during the second intifada of the early 2000s, the court allowed the military to deny Palestinians the right to a hearing before their home was demolished.

While the current reprisals against the Palestinians population are being implemented by the most far-right government in Israeli history, its most liberal institution long ago paved the way.

The blasts also destroyed two adjacent apartments that were home to 11 people, including 7 children.

On Tuesday, 6 October 2015, Israeli security forces blew up two housing units in East Jerusalem and sealed another as collective punishment for attacks perpetrated by relatives of the people living in the three homes.

In the East Jerusalem neighborhood of Jabal al-Mukabber, authorities blew up the home of Nadia Abu al-Jamal, the widow of Ghassan Abu al-Jamal, who perpetrated the attack on the synagogue in Jerusalem’s Har Nof neighborhood, killing four worshippers and wounding seven others. Abu al-Jamal himself was killed in a shootout with police officers. Nadia Abu al-Jamal and her children had left their home after Israel’s High Court approved both the demolition and the family’s deportation from East Jerusalem last July. Despite Israel’s pledge to the Supreme Court to do “everything in its power to prevent damage to adjacent units”, which was given in a petition human rights organizations HaMoked and Addameer filed on behalf of family members, the blast destroyed an adjacent apartment on the same floor, where Ghassan’s brother, Mu’awiyah, lived with his wife and three children.

Security forces blew up another home in Jabel al-Mukabber. This house belongs to the family of Muhammad Ja’abis, who killed an Israeli civilian in August 2014, by running him over with a car. Ja’abis was subsequently shot and killed by the police. The explosion took place in a unit located in the top floor of the home, which is currently occupied only by Muhammad Ja’abis’ mother. The blast, however, caused extensive damage to the bottom floor of the house, where Ja’abis’ brother Shaker lives with his wife and four children. The structure itself is no longer habitable and the Jerusalem Municipality posted signs warning of the danger in its vicinity. The force of the blast also caused damage to other units in nearby houses, where more of Muhammad Ja’abis’ siblings live.

The ruins of the Ja’abis family home and the warning posted by the authorities that the structure is unsafe. Photo by ‘Amer ‘Aruri, B’Tselem, 7 October 2015

In Abu Tur, the authorities sealed a room in the family home of Mu’taz Hijazi, who seriously injured right wing activist Yehuda Glick, in an attempt on his life in October 2014. Hijazi was later shot by the police. The sealed room had been occupied by one of his brothers. Thirteen people, including seven children, lost their home in these three actions. Most of them did not live in the units that were slated for demolition. This figure excludes Nadia Abu al-Jamal and her three children, who were forced to leave their home earlier and have been deported from East Jerusalem.

B’Tselem has documented the destruction of homes adjacent to ones demolished with explosives in the past. In an extensive research project conducted in 2004, B’Tselem found that about half the homes demolished between 2001 and 2014 were never alleged to house suspected attackers. These demolitions resulted in 1,286 people – over and above those living in the homes slated for demolition – losing their homes.

Since the beginning of the occupation, the Israeli military has demolished hundreds of homes as a means of punishing family members of Palestinians who carried out attacks against Israelis or were suspected of doing so. This policy has left thousands of people, including young children, homeless, despite the fact that they themselves were neither guilty nor suspected of committing an offense. In 2005, the military decided to halt this policy after a committee appointed within Israel’s security establishment found that its disadvantages outweigh its advantages. House demolitions resumed in July of 2014, after three yeshiva students were kidnapped and killed in the Bethlehem area earlier that year. The justification given for resuming the policy was that there had been a radical change in the situation. Since then, Israel has demolished four homes and sealed two as a punitive measure.

The policy of demolishing the family homes of attackers constitutes collective punishment, which is prohibited under international law. Despite the fact that this measure is extreme and despite the clear view held by legal scholars in Israel and abroad that the it is illegal, it has been repeatedly sanctioned by Israel’s High Court. Demolishing or sealing a home is a draconian, vindictive measure directed at entire families who have done nothing and are suspected of nothing.