Surgical Strike: NATO’s Bombs Fall like Confetti, Not Containing Conflict but Spreading It

Syria, Isis, Iraq … there are no easy solutions. But killing innocent civilians in Afghanistan and elsewhere draws more people into insurgencies. The US bombing of a hospital in Afghanistan is just one symptom of comprehensive military failure.

9 Oct 2015 – ‘The strike may have resulted in collateral damage to a nearby medical facility.” This is how an anonymous Nato spokesperson described Saturday’s disaster in Afghanistan. Let’s translate it into English. “We bombed a hospital, killing 22 people.” But “people”, “hospital” and “bomb”, let alone “we”: all such words are banned from Nato’s lexicon. Its press officers are trained to speak no recognisable human language.

The effort is to create distance: distance from responsibility, distance from consequences, distance above all from the humanity of those who were killed. They do not merit even a concrete noun. Whatever you do, do not create pictures in the mind.

“Collateral damage” and “nearby” also suggest that the destruction of the hospital in Kunduz was a side-effect of an attack on another target. But the hospital, run by Médecins Sans Frontières, was the sole target of this bombing raid, by a US plane that returned repeatedly to the scene, dropping more ordnance on a building from which staff and patients were trying to escape. Curiously, on this occasion, Nato did not use that other great euphemism of modern warfare, the “surgical strike” – though it would, for once, have been appropriate. 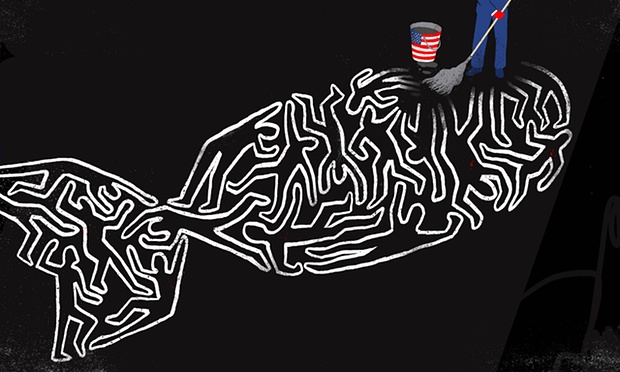 Everything the US and Britain touches ‘now turns to dust, either pulverised directly by drones and bombers, or destroyed through blowback in the political vacuums’ they create Illustration: Sebastien Thibault

Shoot first, suppress the questions later. The lies and euphemisms add insult to the crime. Nato’s apparent indifference to life and truth could not fail to infuriate – perhaps to radicalise – people who are currently uninvolved in conflict in Afghanistan.

Barack Obama’s promise of an internal investigation (rather than the independent inquiry MSF has requested) is as good as the US response is likely to get. By comparison with both his predecessors, and his possible successors (including Hillary Clinton), Obama is a model of restraint and candour. Yet his armed forces still scatter bombs like confetti.

There are hardly any circumstances when bombs – whether delivered from planes or drones, by the US, UK, Russia, Israel, Saudi Arabia or any others – improve a situation rather than exacerbate it. This is not to say that there is never an argument for aerial war, but that if such a step is to be contemplated the consequences must be examined more carefully than anything else a government does. Yet every month we see reports of airstrikes that appear reckless and impulsive.

Of course the Taliban, Isis and al-Qaida not only kill civilians carelessly, but also murder them deliberately. But this surely strengthens, rather than weakens, the need for a demonstration of moral difference.

An analysis published last year by the human rights group Reprieve revealed that attempts by US forces to blow up 41 men with drone strikes killed 1,147 people. Many were children. Some of the targets remain unharmed, while repeated attempts to kill them have left a trail of shattered bodies and shattered lives.

Because the US still does not do body counts – or not in public, at any rate – the great majority of such deaths are likely to be unknown to us. As the analyst Paul Rogers points out, the US Air Force dropped 1,800 bombs while helping Kurdish fighters to wrest the town of Kobane in northern Syria from Isis. It used 200kg bombs to take out single motorbikes. Of the civilian population killed in this firestorm, we know almost nothing, but they do not appear to have been the cause of much grief, or even reflection. An air force major involved in the bombing enthused that “to be part of something, to go out and stomp those guys out, it was completely overwhelming and exciting”. Sometimes this professed battle for civilisation looks more like a clash of barbarisms.

Every misdirected bomb, every brutal night raid, every noncombatant killed, every lie and denial and minimisation, is a recruitment poster for those at war with the US. For this reason, and many others, its wars appear to be failing on most fronts. The Taliban is resurgent. Isis, far from being beaten or contained, is growing and spreading: into north Africa, across the Middle East, and in the Caucasus (a development that Vladimir Putin’s intervention in Syria will only encourage). The more money and munitions the west pours into Syria and Iraq, the stronger the insurgents appear to become. And if, somehow, the US and its allies did succeed, victory over Isis would strengthen the Assad regime, which has killed and displaced even greater numbers. What exactly are the aims here?

By invading Iraq in 2003, destroying its government and infrastructure, dismantling the army and detaining thousands of former soldiers, the US, with Britain’s help, created Isis. Through bombing, it arguably helps to sustain the movement. Everything it touches now turns to dust, either pulverised directly by its drones and bombers, or destroyed through blowback in the political vacuums it creates.

There are no simple solutions to the chaos and complexities western firepower has helped to unleash, though a good start would be to stop making them worse. But a vast intelligence and military establishment that no president since Jimmy Carter has sought to control, the tremendous profits to be made by weapons companies and military contractors, portrayals of these conflicts in the media that serve only to confuse and bamboozle: they all help to ensure that armed escalation, however pointless and counter-productive, appears unstoppable. Russia’s involvement in Syria is likely to provoke still greater follies.

There are no clear objectives in these wars, or if there are, they shift from month to month. There is no obvious picture of what victory looks like or how it might be achieved. Twelve years into the conflict in Iraq, 14 years into the fighting in Afghanistan, after repeated announcements of victory or withdrawal, military action appears only to have replaced the old forms of brutality and chaos with new ones. And yet it continues. War appears to have become an end in itself.

So here comes the UK government, first operating covertly, against the expressed will of parliament, now presenting the authorisation of its bombing in Syria as a test of manhood. Always clear in his parliamentary strategy, never clear in his military strategy, David Cameron seeks to join another failed intervention that is likely only to enhance the spread of terrorism.

Astonishing advances in technology, in military organisation and deployment: all these have made bombing much easier than it used to be, and the consequences harder to resolve.

Published in the Guardian 7th October 2015