The Making of a Sociopathic Killer: A List of Risk Factors for School Shooters 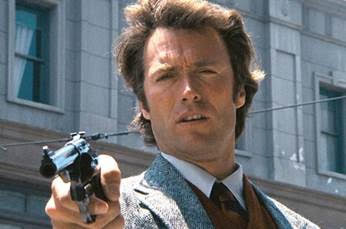 Ho hum, there was another mass shooting at another school a few days ago.

This one was at an Oregon junior college. It happens to be the 142nd school shooting since Sandy Hook (see: http://everytown.org/article/schoolshootings/ for the entire list), and no mainstream journalist is asking (or, if he knows, his editors are not allowing him to reveal the answer to) the pertinent question that people who truly want to understand the epidemic need to know: “What brain-damaging, addictive psych drug(s) was this brain-altered shooter taking or withdrawing from?”

There is an immense amount of evidence that legally prescribed psychiatric drugs are major contributors to acts of violence. This evidence has been gathered (and even published [in peer reviewed journals and alternative media outlets that don’t take advertising revenue from Big Pharma]) by a number of science writers, pharmaceutical industry whistle-blowers, courageous neuroscientists, good investigative journalists and a multitude of silenced psychiatric drug survivors. The range of acts of violence by Drug-intoxicated psych patients range from self-harm to suicidal thinking to suicidal attempts to homicidal thinking to mass murder, and the media is silent on the psych drug connection. (For more on the large variety of aberrant behaviors strongly linked to the so-called SSRI antidepressants, go to www.ssristories.net.) 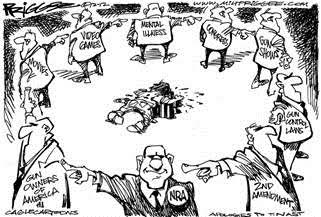 It is important to acknowledge that the mainstream media’s uber-wealthy corporate media owners profit mightily from Big Pharma’s prime time advertising. It is also important to acknowledge that these media elites also profit mightily from their Wall Street investments in the pharmaceutical industry sector. Given those realities it is just good business sense to suppress any unwelcome information that would adversely impact their corporate or personal bottom lines. And so the McCarthy-era black-listing of truth-tellers, uncorrupted scientists, authors, whistle-blowers and real journalists is the norm wherever corporations and the wealthy elite rule.

The four lists below identify particular personality traits and behaviors (as well as issues of family, school and social dynamics) that the FBI regards as important risk factors for many forms of violence, especially in the case of the American childhood and adolescent school shooters. The complete file, which is entitled: THE SCHOOL SHOOTER: A THREAT ASSESSMENT PERSPECTIVE, from which I have excerpted (and edited, in some cases) what I regard as the most useful information, can be accessed by googling the title.

As a physician that practiced holistic, non-drug, mental health care during the last ten years of my family practice career, and who has studied our uniquely American School Shooter epidemic, I agree with the content of these lists. However, as I will point out, item D3 (The Effects of Drugs and Alcohol) is woefully – and deceptively – inadequate.

I have personally and very carefully listened to the horrific stories of over a thousand psychologically-traumatized (and subsequently drug-intoxicated) patients who sought my care. All of them had been labeled with a large variety of “mental illnesses of unknown cause”. Many of my patients confessed to me that I was the first doctor to have asked about their stories, listened to them or even seemed to care about the origins of their mental health issues. Virtually all of my patients had been told by their psychiatrists that they would have to be on drugs for the rest of their lives.

Virtually all of my patients had tried to stop or cut down on the drugs that they knew were sickening them. Each time they tried to stop the offending drug, they experienced totally new withdrawal symptoms, but when they saw their psychiatrist, rather than acknowledging that they were suffering serious withdrawal symptoms from their dependency-inducing drug, they were told that their “mental illness of unknown cause” was coming back. Too often they were also told that they resume the drug, possibly at a higher dosage and even have a new drug added to counteract the new symptoms. And, all-too-often they were shamed for not being compliant with “doctor’s orders”.

The cartoon below, from a colleague of mine, health care journalist and brilliant cartoonist Martha Rosenberg, author of the important book, “Born With a Junk Food Deficiency: How Flaks, Quacks, and Hacks Pimp the Public Health”, illustrates the hazards of the merry-go-round of “trial-and-error” mental health care. For more of her cartoon work, google “Martha Rosenberg cartoons” Her insightful articles are featured on many internet websites (google “Martha Rosenberg articles” to read them.). 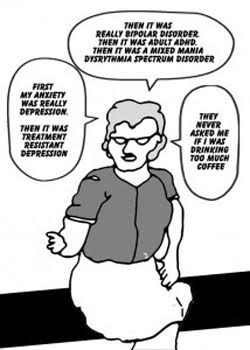 Because of my insider experience dealing with many survivors of psychiatry and the psycho-pharmaceutical industry, I have learned a lot about the dark side of those two industries. I have chosen to perform my ethical duty to warn potential future victims by pointing out the dangers of the widespread use of brain-altering psychotropic drugs, which have often been prescribed “off label”, in various untested dosages and untested combinations of drugs, which have NOT been approved by the FDA for use in the 18 or younger population, the average age of America’s school shooters, (whose brains have not fully developed).

<<<Consistently – and Intentionally(?) – Ignoring the Teachable Moments That Follow Each Mass Shooting>>>

In my various past writings (many of which are accessible by googling “Duluth Reader Duty to Warn”), I have repeatedly pointed out much of the overwhelming – albeit black-listed by most of the mainstream media – evidence that psych drugs and the tendency to commit violence. Such drug-induced violence is well-known is the illicit drugs, whose molecular structures are no different than the legal drugs. The violence can be inflicted on the drugged person himself (cutting, suicidality) and/or on others (aggression, homicidality), particularly in the drug-altered brains of the vilified mass school shooters who are typically both homicidal and suicidal. (It is important to note at this point that depressed people may be suicidal, but they are never, never homicidal until they are on brain-altering drugs or withdrawing form them.)

The powerful corporate media, with its powerful pharmaceutical industry connections, must shoulder a share the blame for America’s lack of understanding about gun/drug violence by its intentional failure to report on the reality of violence-inducing psychiatric medications. (It is a provable fact that virtually all of the school shooters, where good investigative journalism had been done, had been taking or withdrawing from psych drugs immediately prior to the carnage).

As is the norm with our dumbed-down and distracted society these days, most every tragedy that could and should have made use of the classical “teachable moment” by exposing all of the corporate culprits that have contributed to so much despair among our hopeless, futureless, jobless, abused, neglected, over-indulged, unloved, sleep-deprived, mal-nourished, over-vaccinated, over-drugged and bullied children, whose main reason for living has been their addictive screen-time, their addictive, first-person shooter video games, their isolated FaceBook “friendships” and the media’s glorification of war and violence. Instead, the media gives us shallow, irrelevant human interest stories and useless proclamations from our politicians and denials from various pro-gun industry trade organizations that keep our attention away from the real root causes.

The research that the FBI did should be helpful for concerned people who are truly interested in the early identification and therefore possible prevention of some future school shooting tragedy. The claim can be made that they are relatively rare (only 124 actual incidences over the last 3 years!) but this is another area where our spiritually-wounded “Exceptional America” is # 1 in the world. And what can be prevented is much more that the weekly, celebrated mass shootings that increases viewership and readership, but the personal, secret, emotional suffering that is all around us in the tinder box, ready to explode, that is our society, our families, our schools, and our mean streets.

The reasons for the American epidemic of military, domestic and interpersonal gun violence are many and complex, but also so believable, and no other country in the world is even a close second. We should all be ashamed of our nation, but the industrial-strength root causes that are the largest part are corporate causes that stem from our corrupt capitalist economic system.

The brain-altering, over-drugging of American adolescents (that follows close behind the brain-damaging over-vaccination policies that affect so many of our babies, toddlers and children) are serious parts of the puzzle. But, because those two unique American policies are also serious threats to several highly profitable American industries, they have been effectively protected .from exposure. Exposing those taboos subjects would be stepping on big toes that have the power to intimidate, black-list, hire, fire and worse.

Again, be sure to note that the REAL issue of psychiatric drug-induced violence is absent from this list!

A) Student Personality Traits and Behaviors

1) A Preoccupation With Violence (and themes of hopelessness, despair, hatred, isolation, loneliness, nihilism, or an “end-of-the-world” philosophy. School writings may contain recurrent themes of violence.)

6) Signs of Depression (The student shows features of depression; unpredictable and uncontrolled outbursts of anger, a generalized and excessive hatred toward everyone else, and feelings of hopelessness about the future. Other behaviors might include psychomotor agitation, restlessness, inattention, sleep and eating disorders, and a markedly diminished interest in almost all activities that previously occupied and interested him. The student may have difficulty articulating these extreme feelings.)

7) Narcissism (The student is self-centered, lacks insight into others’ needs and/or feelings, and blames others for failures and disappointments.)

13) Pathological or Exaggerated Need for Attention

19) Seeks to Manipulate Others

22) Change of Behavior (The student’s behavior changes dramatically. His academic performance may decline, or he may show a reckless disregard for school rules, schedules, dress codes, and other regulations.)

5) No Limits or Monitoring of TV and Internet

1) Student’s Attachment to School (Student appears to be “detached” from school.)

2) School’s Tolerance for Disrespectful Behavior (Bullying is part of the school culture and school authorities seem oblivious to it, seldom or never intervening or doing so only selectively. Students frequently act in the roles of bully, victim, or bystander (sometimes, the same student plays different roles in different circumstances). The school atmosphere promotes racial or class divisions or allows them to remain unchallenged.)

1) Media, Entertainment, Technology (The student has easy and unmonitored access to movies, television shows, computer games, and Internet sites with themes and images of extreme violence.)

2) Peer Groups (The student is intensely and exclusively involved with a group who share a fascination with violence or extremist beliefs.)

Dr Kohls is a retired physician who practiced holistic, non-drug, mental health care for the last decade of his family practice career. He now writes a weekly column for the Reader Weekly, an alternative newsweekly published in Duluth, Minnesota, USA. Many of Dr Kohls’ columns are archived at http://duluthreader.com/articles/categories/200_Duty_to_Warn.

Anticopyright: Editorials and articles originated on TMS may be freely reprinted, disseminated, translated and used as background material, provided an acknowledgement and link to the source, TMS: The Making of a Sociopathic Killer: A List of Risk Factors for School Shooters, is included. Thank you.