Beirut and Paris: A Tale of Two Terror Attacks

Where was the global sympathy when a terror attack left at least 44 people dead and 239 others injured in Lebanon? 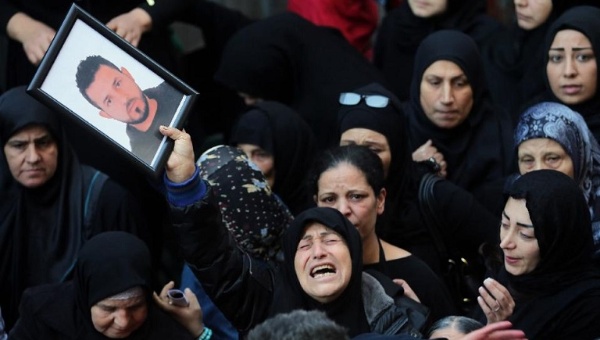 Unlike with the Paris attack, the world was silent when Lebanese mourned their dead after a deadly suicide attack killed at least 44 people and injured hundreds in Beirut a day earlier. | Photo: AFP

14 Nov 2015 – As news arrived yesterday of terror attacks in Paris that ultimately left more than 120 people dead, U.S. President Barack Obama characterized the situation as “heartbreaking” and an assault “on all of humanity.”

Presidential sympathy had been conspicuously absent the previous day when terror attacks in Beirut left more than 40 dead. Predictably, Western media and social media were much less vocal about the slaughter in Lebanon. And while many of us are presumably aware, to some degree, of the discrepancy in value assigned to people’s lives on the basis of nationality and other factors, the back-to-back massacres in Beirut and Paris served to illustrate without a doubt the fact that, when it comes down to it, “all of humanity” doesn’t necessarily qualify as human.

Of course, there’s more to the story than the relative dehumanization of the Lebanese as compared with their French counterparts. There’s also the prevailing notion in the West that — as far as bombs, explosions, and killings go — Lebanon is simply One of Those Places Where Such Things Happen. The same goes for places like Iraq, to an even greater extent, which is part of the reason we don’t see Obama mourning attacks on all of humanity every time he reads the news out of Baghdad.

The situation in Iraq is also obviously more complicated — not to mention the ones in Afghanistan, Yemen, and other locations on the receiving end of U.S. military atrocities. Why doesn’t it break the president’s heart to order drone attacks and other life-extinguishing maneuvers?

Short answer: because it’s not the job of superpowers to engage in self-reflection. Thus, Obama’s selective vision enables him to observe in the case of Paris: “We’ve seen an outrageous attempt to terrorize innocent civilians.”

Our sincerest prayers with those who have been killed & injured through acts of violence. #Paris #Baghdad #Beirut pic.twitter.com/cPD8ilVqgT

It bears mentioning that, in the case of Beirut, the city’s multi-sectarian composition has allowed for varying intra-metropolitan gradations of humanity, available for detection by the Orientalist eye. It’s safe to surmise that, had the recent suicide bombings taken place in, say, an upscale Beirut nightclub, beach resort, or other Lebanese venue about which the superficial Western media love to exclaim, the human fallout may have aroused more audience interest.

Indeed, had the victims been more “like us” than the otherized, eerie- and criminal-sounding inhabitants of Beirut’s southern suburbs where the bombings occurred — incessantly described by the sheeplike media as a “Hezbollah stronghold” or “Hezbollah bastion” — they’d have stood a much greater chance of breaking our hearts.

Hell, we might have even seen references to Beirut’s romanticized former identity as the “Paris of the Middle East.”

Following yesterday’s attacks in the Paris of Europe, meanwhile, Facebook users in the vicinity of the city were encouraged to check in as “safe” — an option not made available the previous day to Facebook users in Beirut. In her own Facebook status today, Professor Laleh Khalili of the School of Oriental and African Studies in London noted that, while the online social networking service had also offered the safety check-in after this year’s earthquakes in Nepal, Chile, and Afghanistan/Pakistan, the same “button is not offered to people in Palestine or Syria or Iraq or Lebanon and countless other zones of destruction.”

“What might including Paris in the rank of ‘natural’ disasters mean other than a stripping of its politics, a kind of anti-politics that sees this as a story of good vs. evil or of suffering but without a history? Those other places are ‘political’ and their victims cannot be invoked in [Facebook’s] supposedly ‘neutral’ milieu.”

As for the clearly political repercussions of the Paris massacre, which French President François Hollande has blamed on the Islamic State group, persecuted refugees and minorities naturally stand to bear the brunt of the inevitable racist and xenophobic backlash — a godsend for right-wing European politicians and organizations, keen to exploit the bloodshed to the max in the service of their own sociopathic visions.

My thoughts with #Paris & #Beirut & the #refugees who will inevitably bear the immediate brunt of these attacks.

In its live updates on the aftermath, the British Guardian reported today that “Poland has announced it will no longer take refugees via an EU program, in a deeply controversial statement which linked the [refugee] crisis to the killings in Paris.”

Unfortunately, however, there are a whole lot of people who won’t see such a move as controversial at all. And as the obstacles to refugee existence multiply, what’s often forgotten is that events like the Paris massacre pale quantitatively in comparison to the situations many refugees are fleeing — ones in which the West itself is often implicated.

In a world far superior to the one we have, the scenario might qualify as an assault on all humanity.

The fact that it doesn’t is truly heartbreaking.

Belén Fernández is the author of “The Imperial Messenger: Thomas Friedman at Work,” published by Verso. She is a contributing editor at Jacobin magazine.