Even War Has Rules

11 Nov 2015 – No one disputes that the United States military attacked a hospital in the city of Kunduz, Afghanistan, in the pre-dawn hours of Saturday, Oct. 3. The airstrike on the Doctors Without Borders facility, the Kunduz Trauma Center, was devastating, with at least 30 people killed. Patients in the only intensive-care unit in the region were burned to death in their beds. Medical staffers were killed by shrapnel bombs that tore off their limbs. At least one person was decapitated. As people fled the burning building, the U.S. AC-130 gunship slaughtered them from above with automatic fire. Doctors and other medical staff were shot while running to reach safety in a different part of the compound.

The Kunduz Trauma Center had been in the same place, performing thousands of surgeries and treating tens of thousands of people in the emergency room, for four years. Doctors Without Borders, known internationally by its French name, Medecins Sans Frontieres, or MSF, had repeatedly provided the exact GPS coordinates of the hospital complex to U.S. and Afghan government officials. “As a precondition of opening the hospital, we negotiated with both the U.S., Afghan, NATO, as well as opposition forces, with the Taliban. We received the support of all of those groups to operate this hospital,” Jason Cone, the executive director of Doctors Without Borders USA, told us on the “Democracy Now!” news hour. “Part of that was sharing our GPS coordinates with the various parties. We shared them as recently as September 29th.” 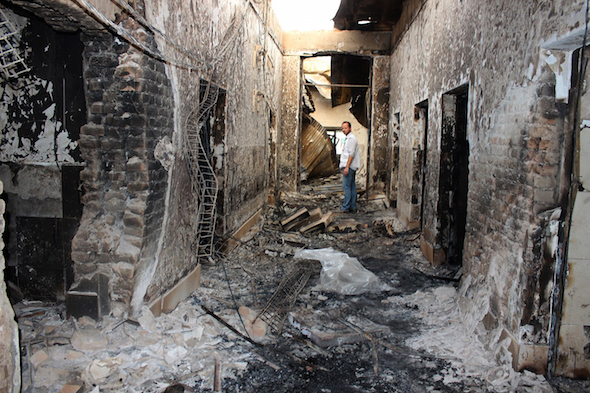 Sept. 29 was an important day in Kunduz. Battles for control of the city had been raging since April. On Sept. 28, a Taliban force reported to be only 500 strong routed 7,000 Afghan National Army troops, capturing Kunduz. This was the first major city that the Taliban had taken since the U.S invasion and occupation began in October 2001, when the Taliban were driven from power. MSF knew that the front line of the conflict had come to their door, and that there would be many more casualties flooding the hospital. “It was probably the most well-lit structure in the entire city of Kunduz, which has about 300,000 people in it, because we were running generators that night,” Cone said.

When asked if the attack constituted a war crime, Cone employed the precise language of the humanitarian-aid worker: “There’s been a lot of discussion about whether or not this was a mistake. This is not necessarily the threshold that has to be crossed for this to constitute a grave breach of international humanitarian law. If the military fails to distinguish between military and civilian targets, as is in this case, from our standpoint, from everything we know, then they’re guilty.”

MSF conducted an extensive internal review and shared it with the U.S. government, NATO and the Afghan government. The next day, they released it to the public. “It’s part of our efforts to cooperate with the investigation. There needs to be an independent and impartial investigation conducted into the bombing,” Cone explained. MSF has asked the U.S. government to accept the services of a Swiss-based group, the International Humanitarian Fact-Finding Commission, which was founded 24 years ago specifically to investigate possible war-crimes violations. To date, the commission has never been put to use on an investigation. Meanwhile, the perpetrators of the attack—the U.S. government, NATO and the Afghan government—are conducting their own investigations. MSF’s public demand for an independent investigation is being supported by a global petition that has so far garnered more than 500,000 signatures.

Three weeks after the attack in Kunduz, another MSF hospital was struck, this time in Yemen. The hospital was hit multiple times over a two-hour period last week, even though the roof was marked with the MSF logo and its GPS coordinates had been shared multiple times with the Saudi-led coalition. Every indication is that the Saudi Arabian military, using U.S.-provided bombers and arms, launched the strike.

“It certainly is a breach of humanitarian law,” Cone said of the Yemen attack. “For us, this is about just reinforcing the fact that there are the Geneva Conventions that govern the laws of war … we need to understand that governments still respect these rules, because it’s the rules that allow us to send people into these war zones and treat the victims.”

The horror of the Kunduz hospital attack will never leave MSF nurse Lajos Zoltan Jecs. She was sleeping in the hospital safe room when the bombs hit: “We tried to take a look into one of the burning buildings. I cannot describe what was inside. There are no words for how terrible it was. In the Intensive Care Unit six patients were burning in their beds. … We saw our colleagues dying. Our pharmacist … I was just talking to him last night and planning the stocks, and then he died there in our office.”

Neither hospital attack has been mentioned in any of the U.S. presidential debates or forums so far. We need a full investigation of these crimes, to hold those responsible accountable. And we need a full debate, in this presidential year, to determine whether attacks like these, that only perpetuate terror, will be allowed to continue.

Amy Goodman is the host of “Democracy Now!,” a daily international TV/radio news hour airing on more than 1,300 stations. She is the co-author, with Denis Moynihan, of The Silenced Majority, a New York Times best-seller.