12 Nov 2015 – On November 10 (Japan time), the captive industry’s inextricable link to the slaughter of dolphins and small whales in the infamous cove was on full display once again in Taiji, Japan.

That morning, two Risso’s dolphins were transported from the Taiji Harbor pens, where they had been held since being captured from a pod of 15 Risso’s – the rest of whom were brutally slaughtered – on November 4 (Japan time). The Risso’s were lowered into tiny, dark, wooden, coffin-like crates and loaded onto transport trucks. Dolphins and whales, highly intelligent and sound-sensitive animals who rely on sonar – are often transported by truck or plane hundreds or even thousands of miles in this horrible way by the captive industry. 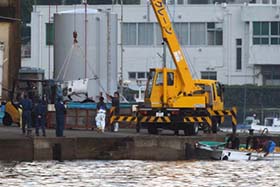 One of the two Risso’s dolphins is transferred via sling into a transport truck.
Photo: Sea Shepherd

As the two Risso’s dolphins were sent to face a lifetime of imprisonment in captivity, 11 hunting boats departed Taiji Harbor to search the ocean for more victims. At approximately 9:00am (Japan time), Sea Shepherd’s Cove Guardians saw six vessels of the fleet coming together, as they began to drive a pod toward the cove. But greed knows no limits in Taiji, and three boats soon broke from the drive formation and traveled further out to sea in their greedy quest – another pod had been spotted.

After facing a long and stressful drive, the first pod was held by the boats just outside the cove as the second pod was driven toward the same “final” destination. As the two pods were merged, the killers completed their push into the cove, with a total of 14 bottlenose dolphins, including at least two babies, captured. The exhausted and panicked pod was left to swim, huddled together, in the cove for longer than an hour as greedy buyers and trainers arrived from the harbor. 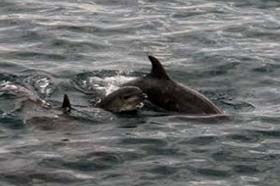 A mother and juvenile bottlenose dolphin spend their final moments together in the cove.
Photo: Sea Shepherd

Five dolphins, one juvenile among them, were stolen from the sea and from their pods for a stark, barren future in captivity, six were slaughtered, and the three remaining members of the shattered dolphin family pod were driven back out to sea. Two of the three released were small babies, left with little chance of survival on their own.

Sea Shepherd’s Cove Guardians continue to monitor the captive dolphins in the Taiji Harbor pens, which are now nearly full with prisoners, being trained to perform tricks. The Cove Guardians have documented that dolphins recently added to the pens have relented to the conditioning forced upon them by trainers, and have begun to eat dead fish. The total number of dolphins taken captive thus far during the 2015-2016 season now includes 55 bottlenose and two Risso’s.

Though it is not the trainers who actively take the lives of the dolphins, they too have blood on their hands. Sea Shepherd’s Cove Guardians have documented time and time again that the captive selection process takes place simultaneously to the killing – hunters and trainers working side-by-side to choose the “prettiest” dolphins to be taken captive, and the trainers knowing full well that those whom they toss aside will be mercilessly stabbed to death before the eyes of their family. 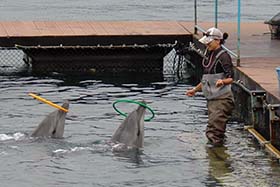 Until the highly profitable international trade in live dolphins and whales for captivity is ended, the waters of the cove will continue to run red with blood. While one slaughtered dolphin is butchered to produce approximately $600 USD worth of meat, just one trained captive dolphin can be sold by the hunters for as much as $250,000 USD. The Taiji Fisherman’s Union claims that this hunt is about culture; the numbers tell a different story.

The captive industry continues to feel the backlash from a public that no longer wants whales and dolphins confined to concrete tanks, and the day is coming when cetacean captivity will end. It is only then that this bloodshed will stop. We hope that you will stand with Sea Shepherd and our Cove Guardians by pledging not to support any aquarium, marine park or other facility that holds cetaceans captive. Let’s break the cycle that flows from Taiji to tanks.