20 Nov 2015 – Lately, the cabinet of Japan’s Prime Minister, Shinzō Abe, is clearly running amok. It is sable rattling, militarizing the Constitution and arming Japan to its teeth. It is picking up fights, unnecessarily, mainly to show its allegiance to the handlers in Washington and in the European capitals. 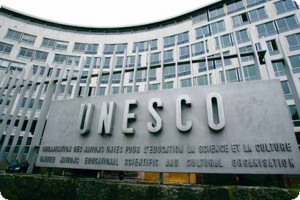 Now, according to The Guardian, “Japan threatens to halt UNESCO funding over Nanjing massacre listing”:

“Japan has threatened to withdraw its funding for UNESCO after the UN body included disputed Chinese documents about the Nanjing massacre in its Memory of the World list, despite protests from Tokyo.”

In late 1937, over a period of six weeks, Imperial Japanese Army forces brutally murdered hundreds of thousands of people in the Chinese city of Nanking (or Nanjing). The horrific events are known as the Nanking Massacre or the Rape of Nanking, as between 20,000 and 80,000 women were sexually assaulted.

Only a lunatic would try to dispute that the Nanjing massacre actually took place. And even Abe’s cabinet is not really disputing it. But Japan is “crossed” that it was not “consulted”. And it also refuses to admit that it actually massacred about 300.000 Chinese people in Nanjing alone.

Japan’s arrogance knows no boundaries. So called “liberal” daily newspaper, Asahi Shimbun, recently insulted China’s academics and journalists, claiming that they cannot really access the numbers of the Nanjing victims, because they have “no freedom” to independently do so. As if most of the Japanese media and academia would be anything else than some sclerotic and subservient group of collaborators with the West.

But back to UNESCO! The Memory of the World is one of the last great projects of this once progressive and anti-imperialist organization. This is where the countless crimes against humanity are immortalized, as well as the brave and determined resistance against the Western supremacy, colonialism and wars. And going through the list it gets clear that most of the crimes were actually committed by the extreme right-wing regimes backed by the Western imperialism: from Chile, Paraguay and Argentina to Angola, South Africa and elsewhere.

The list also includes the 1955 Bandung Asia-Africa Conference in Indonesia, as well as many cultural heritage forms, from all over the globe.

From the beginning, the West and its allies were always disgusted with UNESCO and its positions. They have been doing everything possible to reduce its funding to an absolute minimum, and to diminish its influence on the world.

In the past, the United Nations Educational, Scientific and Cultural Organization (UNESCO) used to make attempts to function like an independent progressive global brain, connecting some of the greatest educationalists, thinkers, scientists and artists of the planet.

UNESCO was greatly influenced by the Cuban education system, by Marxist ideology and by the anti-colonialist and anti-imperialist struggle in Africa and all over the World.

Throughout the history, UNESCO’s staff consisted of many important internationalist and anti-imperialist thinkers. This fact, unsurprisingly, infuriated Western and pro-Western imperialist powers. In 1956, South Africa withdrew from the organization and it was not until the fall of the apartheid that the country rejoined, in 1994 under the leadership of Nelson Mandela.

The United States left UNESCO in 1984, declaring, “The organization was riddled with corruption and overly influenced by the Soviet Union”. The U.S. Department of State wrote on its official site: “The United States joined UNESCO at its founding but later withdrew in 1984 because of a growing disparity between U.S. foreign policy and UNESCO goals.”

In the 1980’s, the United Kingdom and Singapore left as well.

The situation changed only after the organization was so-called “reformed”, especially under the leadership of yet another Japanese pro-Western bureaucrat lackey, Director-General (1999-2009), Koichiro Matsuura. Educated in the US, this Japanese career diplomat took over the Paris-based organization in 1999. Since then Mr. Matsuura had been relentlessly lobbying for the United States to return, while purging “hardline” anti-imperialist cadres from the ranks of his organization. Under his leadership, UNESCO became toothless, submissive to the West, and technocratic. He managed to strip it of all ideological principles. In short: he turned UNESCO into yet “another UN agency”.

“There is absolutely nothing we can do”, several UNESCO staff members told me in Paris, during the Matsuura reign. “This is perhaps the end of the organization, as we know it. It is the end of its independent and progressive global stand.”

The New York Times reported in 2002 (“How the head of UNESCO got Washington to rejoin”):

“Director-General Koichiro Matsuura… has spent three years lobbying energetically in Washington to convince administration and lawmakers that this rehabilitated UN agency could be a valuable world forum — notably for the United States… In other words, he said in an interview, America has gone as far as it can go in reforming Unesco from the outside, and now it is time for Washington to keep up the pressure from inside the organization it left 18 years ago, when it charged that the organization was riddled with corruption and overly influenced by the Soviet Union…”

The New York Times wrote this without any irony or sarcasm. This is how the world was supposed to function. “A valuable world forum — notably for the United States!” Is this what the UN agency was supposed to represent? For a Japanese bureaucrat that was the case, perhaps, but for the world?

Even in the past, UNESCO was periodically forced to abandon its internationalist and often pro-Communist positions. As described by Charles Dorn and Kristen Ghodsee in their academic report “The Cold War Politicization of Literacy: Communism, UNESCO and the World Bank”:

“Throughout the Cold War era, UNESCO director generals struggled to both develop a clear strategy for eliminating illiteracy and obtain the funding necessary to fully implement their literacy projects. Moreover, as with other UN agencies, such as the World Health Organization, Cold War tensions exposed UNESCO to U.S. criticism that it had come under Communist inﬂuence and that the goals of Fundamental Education were “contrary to American ideals and traditions.” Furthermore, after the widely recognized success of Cuba’s “mass” literacy campaign in 1961, UNESCO faced increasing pressure from the Johnson administration to redeﬁne its literacy programs as “functional” (the term used to refer to vocationally oriented literacy) rather than “mass” (the term used to refer to literacy that was meant to achieve a political or social goal such as consciousness raising), the latter having become associated with Cuba and communism.”

In 2011, Palestine became a UNESCO Member State after 107 member states voted for and 14 voted against. According to the Israeli newspaper Haaretz (4 November 2011):

“Laws passed in the United States in 1990 and 1994 mean that it cannot contribute financially to any UN organization that accepts Palestine as a full member. As a result, it withdrew its funding which accounted for about 22% of UNESCO’s budget.”

Almost immediately, Israel had frozen payments to UNESCO, and imposed sanctions on the Palestinian Authority. So much for the democracy and autonomy inside the United Nations agencies! The West and its allies sent clear message, once again: “You do as we say, or we would starve you to death”.

And so UNESCO got the worst deal imaginable: The US has remained as a Member State, spreading its demagogy and influence, but at the same time it refused to pay its dues, hiding behind some grotesque and supremacist “laws” that it, the US, had erected several decades earlier.

In the Middle East, Western and Israeli interests continuously infiltrate UNESCO, pushing for cooperation with the “opposition”, while the organization tries to work directly with the government of Syria.

And now Japan is threatening to withhold further 10 percent of the funding.

One of UNESCO staff members is concerned about the recent developments:

“This is a very difficult time for the organization and it would become even more so if Japan decided to withdraw its dues or reduce them. US and Israel stopped contributing four years ago, as Palestine became a full member of UNESCO. That is more than 20 percent of the cut. Japan now contributes the largest sum: around 10 percent. For Japan this is not actually even a matter of money but of denying its horrid deeds committed in China during World War II.”

When I think about UNESCO, I imagine my good friends who went to fight for a better world, for the rights to education and culture. UNESCO staff went to all corners of the globe, some ravished by Western imperialism. Many of them went because they were true internationalists, true anti-imperialists, and true revolutionaries.

I also remember that beautiful villa in Santiago de Chile, where UNESCO staff offered political asylum to the members of Allende’s government, right after the US-sponsored military coup of General Augusto Pinochet, on 9-11-1973.

Since those days, the West and its lackeys forced UNESCO to change!

But not everything is lost. There are those who still believe in the mission of the organization; those who are willing to fight for the original UNESCO, which existed before those people like Matsuura turned it into “a valuable world forum — notably for the United States!”

President Rafael Correa of Ecuador, during the plenary meeting, made a speech, in front of 195 Member States at the 37th General Conference of UNESCO, 20 November 2013. His discourse was poetic, philosophical, Latin, full of original pathos on which the organization was formed during its early days:

“UNESCO’s mission is to contribute to the consolidation of peace, to the eradication of poverty, to support sustainable development and intercultural dialogue but this hinges on less charity and more justice. If knowledge were not privatized but placed at the service of humanity as a whole, it could boost the development of the poorest countries. They do not need charity as much as they need skills, science and technology. Nobody is more aware than I am of the fact that—in view of the forces at play in the world today and of the present condition of humanity—this is utopian. But UNESCO was created for Utopia. As Uruguayan writer and the author of the Open Veins of Latin America, Eduardo Galeano, once said, ‘Utopia is on the horizon. I move two steps closer; it moves two steps further away. I walk another ten steps and the horizon runs ten steps further away. As much as I may walk, I’ll never reach it. So what’s the point of utopia? The point is this: to keep walking’.”

As he told me in Montevideo, Eduardo Galeano had two muses: Reality and Utopia. UNESCO used to share them with the master of South American letters.

UNESCO staff should insist on defending original values of its organization. It should be once again serving humanity, not the bullies in Washington or Tokyo!