South Sudan: ‘A Level of Human Suffering I Have Never Seen Anywhere Else’

Children are paying the highest price for 22-month conflict that has displaced millions of people and pushed the world’s youngest country close to famine. 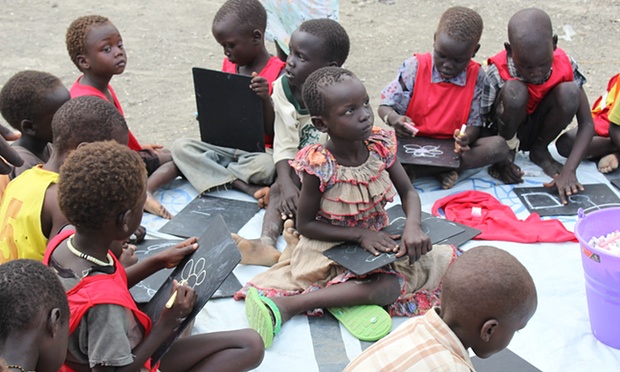 In the schoolyard at the Malakal protection of civilians camp children sketch on slates with chalk. Photograph: Unicef

28 Oct 2015 – Under a pink mosquito dome in a shack among the filthy alleyways of sector two of the Malakal protection of civilians (PoC) camp lies 11-day-old Pul.

Tiny, perfect, sleepy, and naked save for the beads around his neck and wrist, Pul is oblivious to the state of his homeland, a country born a little more than four years before him.

Outside the smoke-filled tarpaulin hut where he lives with his parents, aunt and six siblings, 45,000 people are sheltering under the protection of UN peacekeepers.

Malakal, which sits a few kilometres away on the banks of the White Nile, was once South Sudan’s second city, home to more than 150,000 people, a cross-border trading hub and an international airport.

Today, after almost two years of civil war during which it has passed back and forth between government and rebel hands like a grubby banknote, the population has dwindled and no one seems quite sure how many people live there besides the government troops, the women selling coffee and alcohol, and those still hanging on in the hope of peace or earning a little money.

The ruined airport, which once offered flights north to Khartoum, is patrolled by blue-helmeted Rwandan soldiers, who amble across the pale orange ground carrying Kalashnikovs and grenade launchers.

Their presence reassures those living in the nearby camp. Behind the razor-wire fences and huge bags of earth that make up its perimeter, the people in the PoC count their blessings and their rations of sorghum and lentils.

They are hiding from a war that has killed tens of thousands of people, displaced 2.2 million inside and outside the country, left 4.6 million severely food insecure, and decimated an already weak economy.

The fighting has often slid into horror and depravity over the past 22 months. On Wednesday, a long-awaited report from the African Union (AU) laid out the atrocities that have accompanied the conflict, from rape and murder to the mutilation of dead bodies, forced cannibalism and the existence of mass graves.

“The commission found cases of sexual and gender-based violence committed by both parties against women,” said the report. “It also documented extreme cruelty exercised through the mutilation of bodies, burning of bodies, draining human blood from people who had just been killed and forcing others from one ethnic community to drink the blood or eat burnt human flesh.”

It came less than a week after three UN agencies said that the fighting was choking humanitarian access to those most in need, warning there was a “concrete risk of famine” in some areas within weeks. 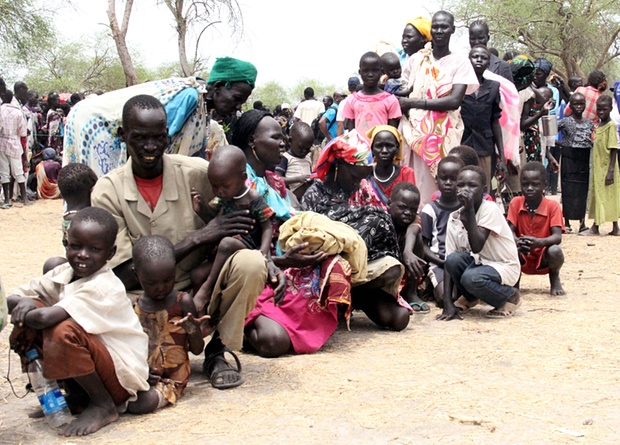 Residents displaced due to fighting between government and rebel forces in Malakal wait at a World Food Programme outpost. Photograph: Denis Dumo/Reuters

Deals to end the fighting in the world’s youngest country tend to have a mayfly-like lifespan; in early October, the regional bloc overseeing the mediation process, said the two sides had violated ceasefire agreements 53 time in 19 months.

Unsurprisingly, the guarded optimism that greeted the signing of August’s peace agreement between President Salva Kiir and his former deputy, Riek Machar, has been short-lived.

The slaughter that began on 15 December 2013 after Kiir, a Dinka, accused Machar, a Nuer, of plotting a coup, quickly tore the country apart along sectarian lines.

However, the AU report has dismissed suggestions of an attempted uprising, saying that the violence appears to have begun after a skirmish between Dinka and Nuer members of the presidential guard led to the government-organised killings of ethnic Nuer civilians and soldiers.

The fuels that have fed the fighting since then are as various as they are explosive and the conflict has been shaped and reshaped by generations-old grudges between and even among different groups, by cattle-raiding, by local militias, by shifting loyalties, and by the proxy war fought by its neighbours, Sudan and Uganda.

The enmity between Kiir and Machar – two heroes of the secession struggle – has also served to underscore the absence of John Garang. A decade after he died in a helicopter crash, the soldier-turned politician who helped propel South Sudan towards independence is sorely missed and deeply revered, his face beaming down from the portraits that hang on walls across the country and staring up from its banknotes.

Most of the unity he built up during the 22-year fight for independence has been murdered over recent months. The carnage sank to its cruellest depths in May this year, when pro-government forces killed 129 children in Unity state over the course of three weeks. Survivors said boys had been castrated and left to bleed to death so they would not live to seek revenge, girls as young as eight were gang-raped, and others were thrown alive into burning buildings. 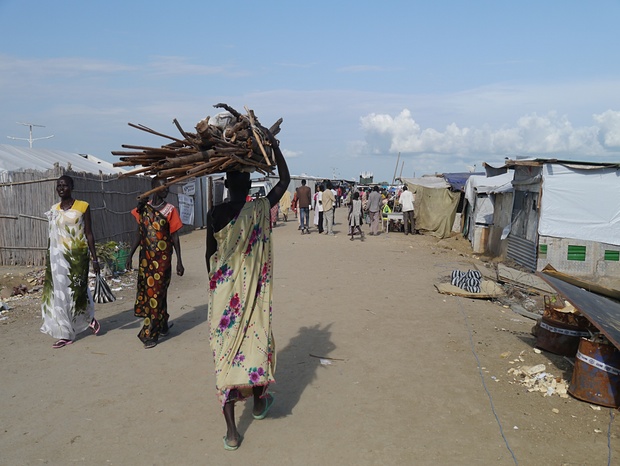 The IDP camp in Malakal, South Sudan. Photograph: Sam Jones for the Guardian

Even the Malakal camp, with its well-armed foreign peacekeepers, is not immune to the violence. Sometimes sticks and knives come out as trouble between the Shilluk, Nuer and Dinka flares up in an almost instantaneous echo of the sectarian killing outside. And sometimes the guns refuse to acknowledge the sanctity of the PoC.

Luny, an 11-year-old boy who fled to the camp with his family last year, lost his elder brother to one such breach.

“There was fighting outside the camp and a bullet came in and hit him,” he says. “His name was Yumlat and he was 15. We used to play and talk together and I miss him a lot. When he died, my mother said she wanted to die, too. She felt it would be better.”

Even after his brother’s death, though, Luny and his family feel that the PoC is still safer than the home they left in a village in Upper Nile state. For the most part, the camp’s residents exist together in relative peace, the Shilluk in sector one, the Nuer and Dinka in sector two.

In the mornings, UN staff register the dozens of daily new arrivals who are still coming from Wau Shilluk, a town across the river that has recently opened up to humanitarian agencies after being cut off by months of fighting.

Some of the children go to school, others plunge into the dark green river to catch tiny fish, and the occasional beer can, with mosquito nets. Women desperate to supplement their rations or earn a little money venture beyond the safety of the razor wire to gather greens where they face the twin threat of rape and crocodiles.

And, like life, commerce goes on, even under the most pitiful circumstances. From early in the morning, the thoroughfares of the PoC become a bazaar for the near-destitute.

On wooden crates, tables and tarps spread on the ground, garlic is sold by the clove and salt in tiny plastic twists. There are potent green and red chillies, onions, okra, tiny limes, chunks of meat shimmering with flies, Kenyan cigarettes, squares of banana bubble gum, small dried fish and nails and bits of scrap metal for use in homes or whatever other ingenious and thrifty schemes the camp dwellers can dream up.

For those whose doors are sturdy enough to support them, there are shiny new padlocks; for those with shoes, there are tubs of polish.

In the afternoons, hundreds of the camp’s 25,000 children head for the Unicef schoolyard that doubles up as a child-friendly space when classes are over. Some play football or dance and sing along to an Italian song about sardines, others draw pictures. The youngest sketch flowers in chalk on slates, while the older ones graduate to paper and sketch 4x4s, houses and churches.

One boy appears to be drawing from memory: flying over a South Sudan flag and a house, a helicopter drops bombs on red stick people who twist and fall to the ground. 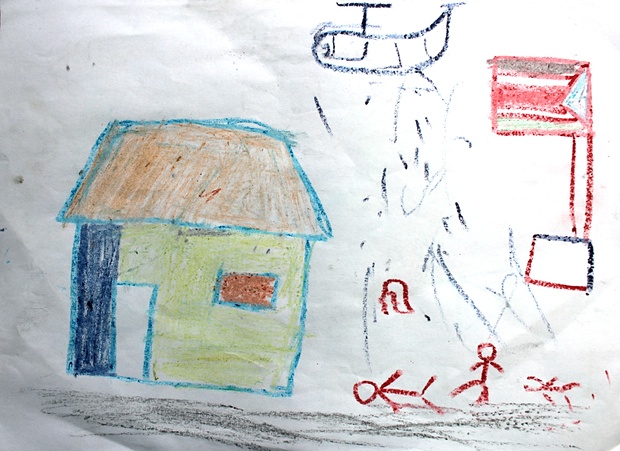 A drawing by a child at the IDP camp in Malakal, showing his experiences. Photograph: Unicef

Ettie Higgins, Unicef’s deputy representative to South Sudan, has worked in Darfur, Somalia, Central African Republic and Syria. But she has never seen a humanitarian emergency as fast-moving or as unpredictable as that of South Sudan.

“People are extremely malnourished,” she says. “We’re seeing massively high rates of malnutrition among mothers who have been feeding everything to their children, including the tubers of waterlilies. The mothers are arriving at [the Bentiu protection of civilians camp in the northern Unity State] and literally collapsing at the gate. That is something – that level of human suffering and desperation – that I have never seen anywhere else.

On every level, adds Higgins, it is children who are paying the highest price for the conflict: about 15,000 are estimated to have been recruited as child soldiers; almost 1,500 have been killed in the fighting, and thousands more have died from malaria, cholera, diarrhoea and malnutrition. She says the numbers will only rise if the fighting does not stop and aid agencies cannot reach those areas most acutely in need of help.

But Higgins is all too aware of South Sudan’s place in the hierarchy of forgotten wars – somewhere below Yemen, somewhere above Central African Republic.

“I know it’s coming at a time when we’re seeing horrific pictures coming out of the migrant or refugee crisis – and I know it’s a more difficult story to tell – but it is no less worth telling,” she says.

“That’s part of the tragedy of South Sudan. People don’t always want to know about it or take the time to understand it.”

Franz Rauchenstein, who spent 18 months in South Sudan as the head of the delegation of the International Committee of the Red Cross, argues that the faltering August peace deal still remains the country’s best chance.

“It is a very fragile situation and it requires leadership from both parties and also continued pressure from the international community,” he says. “That pressure must not be diminished and there also needs to be humanitarian support.”

Until the fighting stops in places such as Unity State, Rauchenstein adds, humanitarians will remain absent and frustrated, “tilting at windmills” as and when lulls in the violence allow them back in for a rushed drop of supplies.

Renewed fears of famine and the accusations made in the AU report will only increase the pressure on Kiir and Machar to settle their differences for the sake of their country.

They will also test the truth of the comparisons made on the president’s website: “Due to his [Kiir’s] close comradeship with the late Dr Garang, he is perceived as the embodiment and assurance of the future of the peace agreement spearheaded by the fallen hero. Indeed, many political analysts and opinion leaders worldwide describe him as the Biblical Joshua who took the mantle of leadership from Moses just as the Israelites were on the verge of entering Canaan and capably established the then fugitives in the Promised Land.”

For now, the hundreds of thousands of fugitives forced from their homes and scattered around the young country have little more than hope and, if they are lucky, some food rations.

Inside his tent, Pul stirs for a feed and his mother, Nyandong Gik, explains how his name was chosen.

“It means whole,” she says. “Everyone outside is fighting, but in here we are whole and together.” 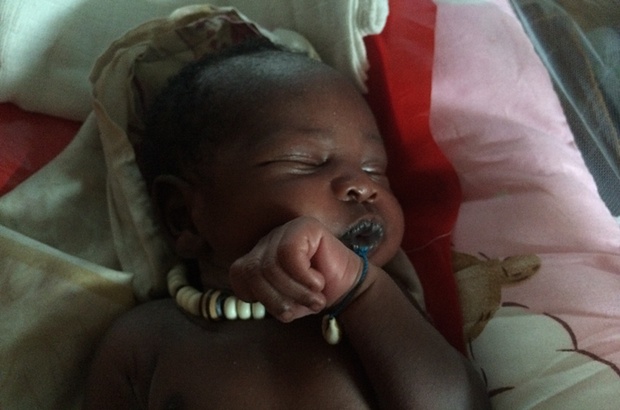 Baby Pul at the IDP camp in Malakal. Photograph: Unicef