The View from the Doctors Without Borders Hospital 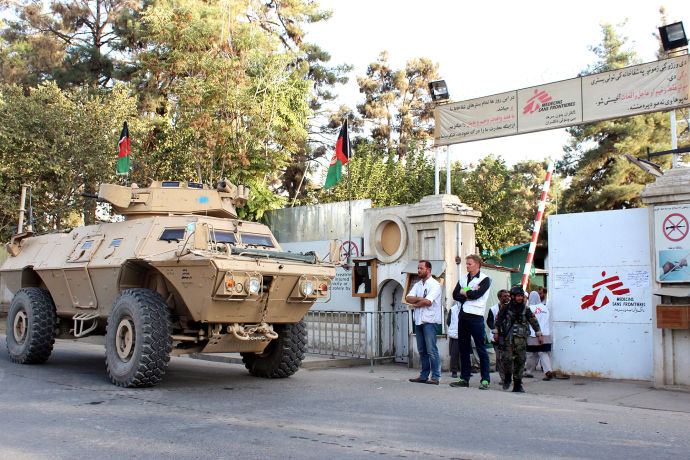 Christopher Stokes, the general director of Doctors Without Borders (second from the left), stands by the gates of the organization’s hospital in Kunduz, Afghanistan, on October 15th. The hospital was bombed by U.S. forces earlier in the month.

6 Nov 2015 – The first part of the Doctors Without Borders hospital in Kunduz, Afghanistan, to be hit when an American AC-130 fired bombs at it, just after 2 A.M. on October 3rd, appears to have been the intensive-care unit. There were eight patients there; two were children. According to witnesses interviewed by the group, known internationally as Médecins sans Frontières, for a preliminary report on the incident, some patients and medical workers in the I.C.U. were killed directly by that first strike; others burned to death in the fires that followed. As the strikes continued—hitting the operating theatres, where two patients died; the administration building; and the main wards—doctors, nurses and patients tried to help others even as they ran for shelter. The first indication that staff members, who were sleeping in an administrative building, had of the scale of the devastation was when a nurse stumbled in; he was covered in blood, “with his left arm hanging from a small piece of tissue.” Some of them set up makeshift operating tables on a desk and a kitchen counter. Others began making phone calls, desperately trying to get the attack halted.

At 2:19 A.M., an M.S.F. representative who was in Kabul called the headquarters of the Resolute Support mission to say that someone was bombing the hospital. Resolute Support is the name for the over-all NATO operation in Afghanistan, including American troops; it is led by General John Campbell, of the United States. The Resolute Support command knew all about the hospital. Along with every other armed force in the area—including the Afghan military, international troops, and even the Taliban—it had been part of the negotiations that established the hospital’s neutral status and no-weapons policy. This is what allowed M.S.F. to run the only trauma hospital in northeast Afghanistan. Just three days before the attack, amid heavy fighting in Kunduz, M.S.F. had reiterated its exact G.P.S. coördinates to everyone involved. (Indeed, according to the M.S.F. report, on October 1st a United Nations military-civilian liaison reminded M.S.F. to stay within those coördinates.)

But even after the phone call to Resolute Support, the attack continued. Witnesses described seeing people who, as it seemed to the witnesses amid the confusion, were being shot at from the air as they ran (this is one of many points that deserve further investigation). A piece of shrapnel decapitated one hospital staff member. At 2:47—almost half an hour after the first call—the M.S.F. representative texted the Resolute Support headquarters to say that at least one person was confirmed dead and that many more were unaccounted for. Five minutes later, there was a text back: “I’m sorry to hear that, I still do not know what happened.” At 2:56, the M.S.F representative tried again, sending word that the attack had not stopped and that the group believed there were heavy casualties. At 2:59 came the reply, “I’ll do my best, praying for you all.”

Did the United States military do its best? At least thirty people died in the attack: at least ten patients, thirteen staff members, and seven whose bodies were so burned or mutilated that they can’t be identified. Other people are still missing. After a few days of obfuscation and apologies, the U.S. military indicated that Afghan forces had asked for a strike on the site. (At the time, I wrote about at least five unanswered questions occasioned by the military’s statements; rather than being answered, they have become more urgent.) President Obama has apologized for the deaths and promised that the military’s own investigation will be thorough. The M.S.F. report correctly notes that it cannot know what happened in the military chain of command—what it has, it says, is “the view from the hospital”—but it is also right in saying that an independent investigation is necessary.

The calls to Resolute Support were not the only attempts to contact the military: at 2:32 A.M., the M.S.F. office in New York called a contact at the Department of Defense; at the same moment, the group’s representative in Kabul called the civilian-military liaison and, at 2:45, was told by the liaison that word had been distributed on “several channels”; at 2:50, M.S.F. reached out directly to the Afghan Interior Ministry. There were more rounds of texts and calls, between Kabul, New York, and Washington, at 3:04, 3:07, 3:09, 3:10—and then, at 3:13, a text saying that incoming had stopped.

But the telling thing about those calls is not that there was a frantic effort in a war-fogged hour to tell the military that it was making a mistake that it didn’t succeed in rectifying. Indeed, the calls make that scenario harder to accept. For one thing, they illustrate the breadth of M.S.F.’s contacts—they didn’t have to look up the numbers or figure out whom to call. The medical staff in Kunduz were not some do-gooding sojourners who had wandered into a war zone and were hit by a stray bomb; they were known, and appear to have known what they were doing. The report notes that, on the night of the attack, the hospital, in addition to having flags on its roof, was the only compound in the area that had electric power, making it particularly conspicuous and distinctive. The group had been diligent in making arrangements that allowed it to do what international law recognizes as protected work.

Medical facilities are supposed to be off-limits, even when they are treating wounded combatants on both sides of the conflict, as the M.S.F. facility was—a fact that all parties had long known. (The majority of the patients treated at the hospital since it opened, in 2011, were victims of non-violent trauma, such as car accidents; that balance had shifted, though, as the Taliban took control of much of the city in recent fighting.) The night of the attack, the preliminary report notes, there were a hundred and five patients in the hospital. By its estimate, three or four were members of the Afghan government forces, another twenty or so were affiliated with the Taliban, and about eighty belonged to neither force.

In that sense, the most troubling call might have been one that the group got on Thursday, October 1st, from a person the report describes as “a US government official in Washington, D.C.” The official asked if a large number of Taliban fighters were “holed up” in the hospital and if the staff was in danger. The official was told that this was not the case: the hospital was functioning normally and at full capacity, and while some of its patients had been fighting for the Taliban, “MSF also expressed that we were very clear with both sides about the need to respect medical structures as a condition of our ability to keep working.” Those structures included a no-gun policy, which its guards enforced by searching anyone coming in, and which, the report found, was fully in place at the time of the attack. According to the witnesses interviewed, there were no armed men on the ground or fighting in the vicinity when the attack began. But the call from Washington suggests that there may have been some whispering, or accusations, or an alarm raised about the group—in other words, that the hospital may have become somebody’s target and was not just collateral damage in a misdirected action. If this is so, it is possible, as M.S.F. has suggested, that a war crime was committed.

As the report notes, “there were many different forces fighting in the area around our hospital: special forces, regular army, police and the armed opposition,” each of which may have “different understandings or interpretations” of humanitarian law.

Similarly, the report notes that the hospital staff got the sense that two of its Taliban patients were regarded as important. From the beginning, in Afghanistan, one of the known problems for the U.S. has been that we’ve got caught up in rivalries that we don’t understand. It would be a poor excuse if we’ve done so again. “What we demand is simple: a functioning hospital caring for patients, such as the one in Kunduz, cannot simply lose its protection and be attacked,” Joanne Liu, the international president of M.S.F., writes in a letter accompanying the preliminary report. Knowing why the hospital was attacked is necessary for the group to continue working. In 2014 alone, M.S.F. treated twenty-two thousand patients in Kunduz. It employed foreign doctors but also hundreds of local staff members. One of them was a janitor named Najibullah Momand who, as the Times reported, was working in the compound on the day of the attack—he had even donated blood (he was Type O) to a two-year-old girl who came in with her family when their car was caught in the crossfire between Afghan and NATO forces and the Taliban. Her older sister had died, but the doctors were working to save her when the AC-130 flew over the hospital. An hour later, Najibullah was dead, and so was the little girl.

Amy Davidson is a New Yorker staff writer. She is a regular Comment contributor for the magazine and writes a Web column, in which she covers war, sports, and everything in between.