The ‘Where to Invade Next’ filmmaker argues that even if the U.S. banned guns, its lack of a social safety net would still turn many toward violence: “We just need to modify [the NRA’s slogan] to, ‘Guns don’t kill people — Americans kill people.'” 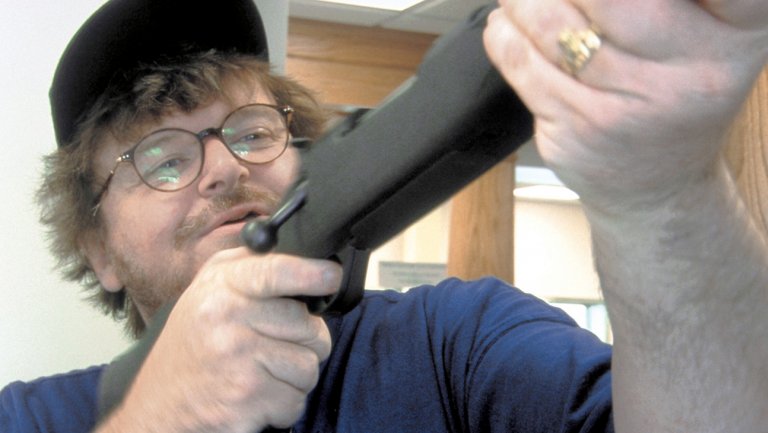 22 Dec 2015 – When Hamlet debuted on the stage of the Globe Theater in May of 1600, a funny thing happened — no one went home and killed their uncle. In fact, in the weeks and months afterward, there was no rash of uncle killings throughout London. The same thing had happened over two thousand years earlier — after the debut of Oedipus Rex, thousands of Greeks (as far as we can tell) did not go home and have sex with their mothers.

With the recent spate of mass shootings — at the community college in Oregon, the Planned Parenthood in Colorado and the county building in San Bernardino — the debate has begun anew, like it has ever since the tragedy at Columbine High School in 1999: do we need stricter gun laws, and do we need to decrease the violence we show in the movies and on TV, as a way to help prevent these tragedies?

There is no question that fewer guns will result in fewer gun deaths. This has been proven in every country that has decided to decrease or remove guns from civilian ownership. In the 1980s and ’90s, Australia had a series of mass shootings, including an awful one at a school in Port Arthur. The conscience of the country was so moved by that slaughter — that’s right, “slaughter,” like the slaughter in Colorado Springs, the slaughter in San Bernardino, etc. — that Australia outlawed nearly all guns. Total number of school shootings since that law passed: zero.

Less guns also mean less successful suicides. It should be pointed out that over half of the nearly 30,000 gun deaths each year in this country are from suicide. If you want to make sure you will die by your own hand, using a gun is the tried and true way to accomplish such a task. But many who attempt suicide don’t really want to die, and by using pills or even slashing their wrists there’s usually a greater that 50% chance that they will live, that someone will save them. There’s not much saving going on when there’s a bullethole in one’s head.

The other pertinent fact regarding gun-related homicides is that more than 60% of murders involve people who know each other — usually it’s a domestic situation between spouses, boyfriends/girlfriends or family members. An argument breaks out and somebody “loses it” and goes and grabs the gun. If guns in these heated situations had not been so easily accessible, many deaths would have been avoided.

We will probably never be able to rid ourselves of the more than quarter-billion guns that are in our homes. But any effort to reduce this number would reduce the level of killing.

Unfortunately, even if we had stronger gun laws, we would still have a few thousand gun deaths in this country. That’s because we have a problem no law can solve. Canada has strict gun laws, but they also have an estimated five million hunting rifles and shotguns in their homes — and they don’t go and shoot each other on a daily basis like we do. In 2013, they had a total of 131 gun murders in a nation of 35 million people. We have nine times their population, but fifty-fives times their gun killings. How can this be?

Which brings us to Hollywood. I don’t think I’m making any big revelation here when I point out that the Canadian kids (and adults) are watching the same exact violent movies, playing the same exact violent video games and watching the same exact violent TV shows as their neighbors, the Americans. So why don’t their students — other than on the rare, rare occasion — continually walk into their high schools and colleges and start firing away? It’s not that the Canadians don’t get angry — have you even been to a hockey game? You cannot say that violent Hollywood movies somehow magically affect only American youth, but no one else. The Japanese cannot get enough of blood and gore in movies, ours and their own. Total number of gun murders in Japan in 2012: three.

It’s not the movies or the video games or the gruesome crime scene photos on CSI that drive us Americans to kill each other. It’s fear. Why would one want to own a gun in the first place? Well, fear of being robbed or assaulted or killed. Wanting to protect yourself or your family. You know, “just in case.”

But in case of what? Remember, the statistics show that the most dangerous threat to you is sitting over there on the couch right now. We have nearly 123 million homes in the US. There are only about 600 home invasions here each year that result in a gun-related death. And in nearly half of those incidents, the deceased was killed by the gun that was in the house to protect… the deceased!

It’s the fear of getting killed that is getting a lot of us killed. But it’s also other fears that are winding us up and making a few of us go crazy enough to take off on a shooting rampage. Unlike in other civilized countries where people take care of each other — with free health care, generous compensation for the unemployed, free or nearly-free college education, strict laws on credit card debt and junk mortgages, serious help and treatment for the mentally ill, aid for aging and infirm people and the list goes on and on. From Ireland to Italy to Norway, from New Zealand to South Korea to Morocco, governments all over the world have discovered that the real way to reduce violence is to simply take care of each other.

What separates us from everyone else is the way we force the members of our society to live in a constant state of fear: fear of going broke, fear of losing your job, fear of getting sick, fear of getting old and being without. We know that there’s no safety net for us here in the USA. We are the “pull yourself up by your bootstraps” nation, the “you take care of yours and I’ll take care of mine” and the “your problems are not my problems” society. Most of us find a way to cope with all of this. We suck it up and take the ulcer for the team. But then there are the few that can’t. And with easy access to any kind of gun — and as much ammo as they want — they find a way to act out their frustration and aggression. Not because they saw Kill Bill. But because they live in the home of the brave. That is something we can change.

But first, it will require some of that “bravery.”

Michael Moore is an Oscar-winning filmmaker whose latest documentary, Where to Invade Next, is on the Academy’s shortlist and opens Dec. 23, 2015.