We Are Going Backwards; COP21 Is the Opposite of Progress

10 Dec 2015 – Naomi Klein speaks with Frank Barat about the limits of the Paris climate talks and how climate change is an accelerator that makes pre-existing problems worse. This interview was originally published in the French publication Ballast. 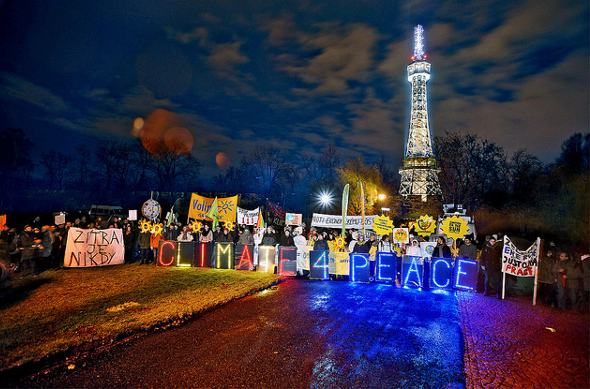 People’s climate march in Prague, 29 November 2015. Friends of the Earth International under a Creative Commons Licence

Frank Barat for Ballast: We’re here in Paris. I live in Brussels. Two of the most talked about cities of the last few weeks. Both cities are under what governments call ‘A state of emergency’. Our security is paramount to everything else apparently. The French and Belgian governments are now discussing passing laws that are very similar to what the patriot act is in the USA. Less civil liberties and more surveillance. How close are we to a new type of shock doctrine?

Naomi Klein: It is not that new. We are in it, not close to it. Some of what we are seeing is worse than what happened after 9/11. Bush did not ban marches and protests across the board. There were certainly increased police presence and more restrictions but this idea of just a complete blanket ban of demonstrations in cities, I don’t remember ever seeing that in North America. What Brussels has experienced is so extreme. So I think this is very familiar, using a crisis and using people’s fear to push through policies that they already wanted to push through like restrictions on privacy, on movement for people, restricting refugee entry, all of this, it is a pretty classic example. The fact that it is unfolding in Paris during the climate summit is really exposing the subjectivity of what gets declared a crisis and what does not. We are here to discuss an existential crisis for humanity and it has never received crisis treatment from elites. They give loads of wonderful speeches but they do not change laws. It is exposing the double standards in a very naked way. In the name of security, they would do almost anything, but in the name of human security, of protecting life on earth, there are loads of talk but no serious regulations of polluters and even the deal themselves they want not to be legally binding. So we are actually moving backwards. The Kyoto protocol was legally binding and now we are moving towards more volunteer, meaningless, non-regulations.

F: Why would a climate deal be our best hope for peace?

N: The first part of it is simply that climate change is already driving conflict. So is the quest for fossil fuels. In terms of the Middle East, our thirst from fossil fuels is a major driver for illegal wars. Do we think Iraq would have been invaded if their major export had been asparagus [as journalist Robert Fisk once asked]? Probably not. We wanted that prize in the west, Iraq’s oil. We wanted this on the world’s market. It was certainly Dick Cheney’s agenda. This destabilized the whole region, which was not particularly stable to begin with because of earlier oil wars and coups and support for dictatorships. This is also a region that is one of the most vulnerable to climate change. Large parts of the Middle East would become unliveable on the emission trajectory that we are on. Syria has experienced the worst drought of its history in the run up to the outbreak of civil war. It is one of the factors that destabilized the country. There is no possibility for peace without very strong actions on climate. What drew me to this issue was understanding that if we are going to take climate change seriously it is going to require a redistribution of wealth, of opportunities and technologies. In this book I begin quoting Angelica Navarro who is a Bolivian trade and climate negotiator, talking about how climate change called for a Marshall Plan for planet earth. For countries that have their resources systematically plundered, like Bolivia and are on the front lines of dealing with the impact of climate change, it requires kind of a writing past wrongs, the transfer of wealth and turning the world right side up that I think are pre-conditions for a more peaceful world.

F: How do you put to the masses of people that to change course, we have to deconstruct capitalism? I think that for most people it is too difficult a change to imagine?

N: In Canada we did this exercise of trying to use climate change and the fact that it puts us on a deadline. Not only do we have to change but we have to change now and if we do not make the most of this remaining decade, it will indeed be too late. What does this mean for healthcare, education, indigenous rights, inequality, what would it look like for refugee rights to take climate change seriously? Our team hosted a meeting of 60 movement leaders and we drafted a document called The Leap. We are really hoping that it would help break through this problem. We found in Canada that the only way to break through is to do it. To get together and act. Everybody is working on such urgent issues. If you are an anti poverty activist or a refugee rights activist, you do not have any spare time. It is only when climate change does not distract from your issue and in fact brings another layer of urgency and a really powerful tool and argument and brings you new allies as well, then people have that space to go, ‘oh yeah, ok, this is actually hopeful, this is not a distraction.’

There are a couple of things we did in Canada. One, we organized a march under the banner ‘jobs, justice, climate’. It was not a theoretical exercise but really an organizing one. How do we talk to people in trade unions about climate in a way that really resonates, how do you talk to people who are just fighting for basic services, for housing, and transit, what would it mean for the Black Lives Matter movement, what are the messages that are different? It really helped. Then we drafted and launched the LEAP manifesto. Not that it is perfect, but it is a start. To me it is shocking the extent to which the anti-austerity movement and the climate movement in Europe do not seem to talk to one another. You could have [Greek Prime Minister Alexander] Tsipras suddenly talking about climate change this week, for the first time from what I can tell since he took office.

These issues are the same stories, so why is it that it seems far off, right? I do not think it is a hard argument to make. I think that people are creatures of habit. There is a lot of fear around talking about climate change. It has been so bureaucratized. A little bit like trade used to be. When we first started talking about free trade deals there was all of this talk about having a degree in international law to understand it as it was so bureaucratic. It was designed to repel public participation. But somehow people started to educate themselves and found ways to talk about it and really understood how it impacted their lives and the things that they understood. They realised they had a right to participate in this conversation. I think that why climate change people are afraid of making mistakes about the science. You have got three levels of bureaucratic language. The scientific, the policy and the UN language. It is very difficult to understand. The UN one is a nightmare. Look at the schedule for the Cop21! It is not in any language anybody could recognize. All of that is part of the reason why even though it is obvious to connect climate to austerity somehow it is not done.

F: I am mostly working on Palestine where climate change and austerity hardly get a mention…

N: Certainly, Palestine people know that water is a major driver and that water scarcity is one of the clearest impact to climate change in the region. Climate change is an accelerate. If you have a pre-existing problem, climate change will make it worse. Look at New Orleans under hurricane Katrina. If you have a society with out of control police and criminal justice system, if you have crumbling public infrastructure, and that you lay on top of that climate change, you have hell on earth. All these things start to go crazy, you have got vigilantes on streets shooting black people – all goes nuts, right?

F: You were talking about trade before. The Transatlantic Trade and Investment Partnership (TTIP) talks are held in secret, but apparently not for everybody as it was recently exposed by the Guardian that Exxon Mobil had access to confidential papers and actually wrote the energy chapter. How much does this say about the world and the democracies we supposedly live in?

N: This is what we are seeing at the COP21, right? It has always been the case that transnationals have been part of negotiations (like the Intergovernmental Panel on Climate Change process for example). In France you actually have the clearest example of the intersection of austerity and corporate influence over climate. Although the Hollande government said that it did not have enough money to organize the COP themselves and that they had to bring in all these corporations to sponsor it, Suez and the rest, all big nuclear energy companies and the rest of it, they have they own ideas and agendas about climate change, solutions 21. GMO seeds, Private water, nuclear energy, offshore winds all of these corporate solutions to climate change. Then the civil society spaces where there was going to be the amplification of people’s solutions, community controlled renewable energy, energy co-operatives, agro farming, all of that space has been dramatically restricted. It isn’t just about the loss of that space, this was always going to be a fight between false corporate solutions and real people solutions and one side of that fight has just really been silenced and constrained while the other one is inside the bubble.

F: Christiana Figueres, Executive Secretary on the UN Framework Convention on Climate Change, wrote recently in the Guardian that ‘The political will to act on climate change has arrived’ and that ‘we will look at Paris as a turning point in this century towards a brighter future.’ Is she bluffing? Is it a means to put pressure on the deciders? Or do you agree with her?

N: (Laughs) I think she is a believer and that she is doing her best. We are seeing some serious engagement, but I think it is really unfair to say that we are turning the corner to that bright future when the targets add up to 3 degree Celsius warming, which is catastrophic.