17 Dec 2015 – Many United States citizens are appalled at recent remarks by Donald Trump and other bigoted politicians advocating policies against Muslims that are eerily reminiscent of Nazi policies toward the Jews. The parallels between the 1930s-40s in Germany and the United States in 2015 are frightening. It is clear to many citizens that the rise of bigotry and fascism in our nation cannot be allowed to continue unchallenged. Organized resistance is essential. In this effort, revisiting the history of resistance to the Nazis offers us some tantalizing concepts. 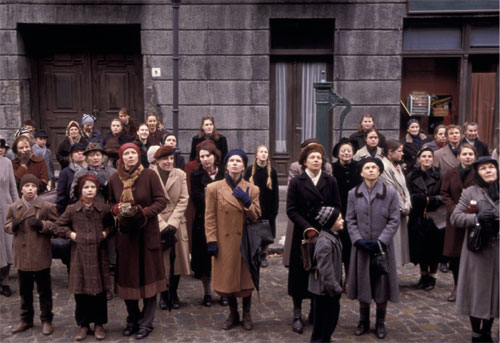 In 2003, a film about the situation in the Rosenstraße came into cinema.

Those of us who choose nonviolent action as a form of making change are often challenged with the question, “But what about the Nazis?” The stories of nonviolent resistance are far more numerous than most people suspect. One of the most interesting successful stories comes from the heart of Germany itself when the women of Berlin rose up to demand the return of their Jewish husbands.

In 1943, Joseph Goebbels promised Adolf Hitler that Berlin would be Judenfrei – Jew-free – in time for Hitler’s birthday. On February 27, without warning, Jews were snatched off the streets and from workplaces and held in buildings temporarily before they were loaded onto trains to be sent to their deaths in the concentration camps. This was the fate of nearly 6,000 Jews from Berlin. Another group, the 1,800 Jews with non-Jewish German wives, were rounded up according to a separate list and held in a building on Rosenstrasse, Rose Street. The German women, upon discovering their husbands were gone, raced to the location and began an impromptu unarmed, nonviolent demonstration demanding the release of their husbands.

For a full week, as many as a thousand women protested night and day, defying orders to disperse, withstanding threats of being shot to death. The German Gestapo office sat within earshot; the women persisted despite the danger. On March 6, as thousands of other Jews were being sent to Auschwitz, the husbands of these Berlin women were released. Even the 38 Jewish husbands who had already been sent to the camps were returned to Berlin. It is said that the Rosenstrasse protest also halted the plans to round up the intermarried Jews in France, a change that likely saved thousands of lives. The German government felt that the dissent and visible signs of resistance would be detrimental to morale at that time and that releasing the men was easier than risking more uprisings. 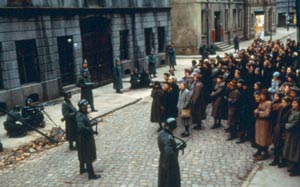 Today, as Islamophobia and anti-refugee rhetoric are whipping the American populace into a frenzy of fear, we need not wait until the eleventh hour to see where this type of discrimination leads. Before politicians allow bigots to require Muslims to register (like the Jews in the 1940s), or wear a symbol (like the yellow star), or be deported to concentration camps, let us take a chapter out of German history – the Rosenstrasse women’s episode – and learn from it. If the threatened registry appears, let us protest it, or sign it en masse as an act of protest. If the parallel to the yellow star occurs, let us all, as citizens, resist the labels unanimously. Let us never forget the words of Martin Niemöller:

And if they come for any of us, let us be prepared to use nonviolent action, as the women of Berlin, to rescue not just our loved ones, but all of our human brothers and sisters, so that the tragedy of the Holocaust can never be repeated. With courage, preparation, and knowledge, we can stop the dangerous cycle of history from repeating in the context of our contemporary lives.

Author/Activist Rivera Sun, syndicated by PeaceVoice, is the author of The Dandelion Insurrection and other books, and the co-founder of the Love-In-Action Network.

Anticopyright: Editorials and articles originated on TMS may be freely reprinted, disseminated, translated and used as background material, provided an acknowledgement and link to the source, TMS: What the Women of Berlin’s Rosenstraße Protest Can Teach Us about Trump, is included. Thank you.